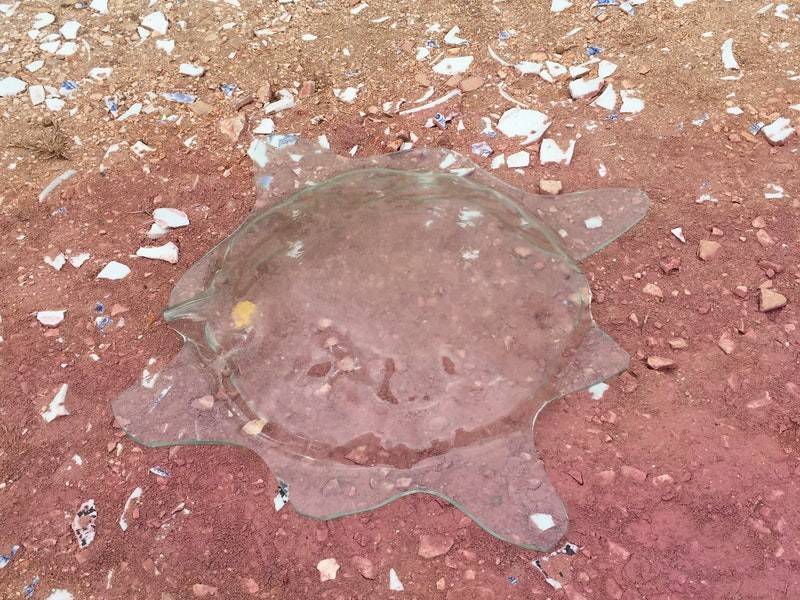 Specifically conceived for the Contemporary Gallery, the first ever exhibition by Hugo Canoilas (Lisbon, 1977) at the Serralves Museum is both a confirmation of, and an expansion on, some core concerns in his practice: a speculative approach to the relationship between art and reality (political and social events), a questioning of the characteristics and boundaries of painting, and an emphasis on collaborative work. Canoilas’ work has been examining the place of painting and how it is perceived both by museum visitors and passers-by (the artist is known for his public space interventions, which are never publicized as artworks). In the case of this exhibition at Serralves, Canoilas dispensed with the place where paintings are most expected to be found – the gallery walls –, and decided to intervene on spaces that are usually neglected by most painting exhibitions, namely the floor, the skirtboard and the ceiling of the Contemporary Gallery.

The floor features three coloured glass pieces representing medusae. Made at Marinha Grande glassworks, these jellyfish – possible symbols of global warming, but also of such ideas as formlessness and metamorphosis, on which several works by Hugo Canoilas are based – are meant to be tread upon by visitors. The central role given to the floor is confirmed by the skirtboard-painting (a lightbox delimiting the exhibition space and featuring a painting on linen stretched like a canvas) which draws attention to an architectural element that is as trivial as it is unnoticed. For the gallery ceiling Hugo Canoilas has created a gestural painting which, like his most recent abstract works, is based on images of oceanic flora and fauna. Also functioning as a lightbox, the painting generates an aura within the room which affects the perception of the medusae.

Medusae are fascinating animals that undergo several metamorphoses across their unusual lifecycles and whose cells reproduce in curious ways. They go through dramatic morphological variations that defy all notions of stability and all ideas on the relationship between the parts and the whole, precisely like this exhibition by Hugo Canoilas, which features three different elements – floor, skirtboard and ceiling – that influence one another in cooperation, symbiosis, competition, predation and parasitism. The show is the embodiment of an artistic practice that does not crystalize around any specific form, but constantly questions its own limits, functions and assumptions.