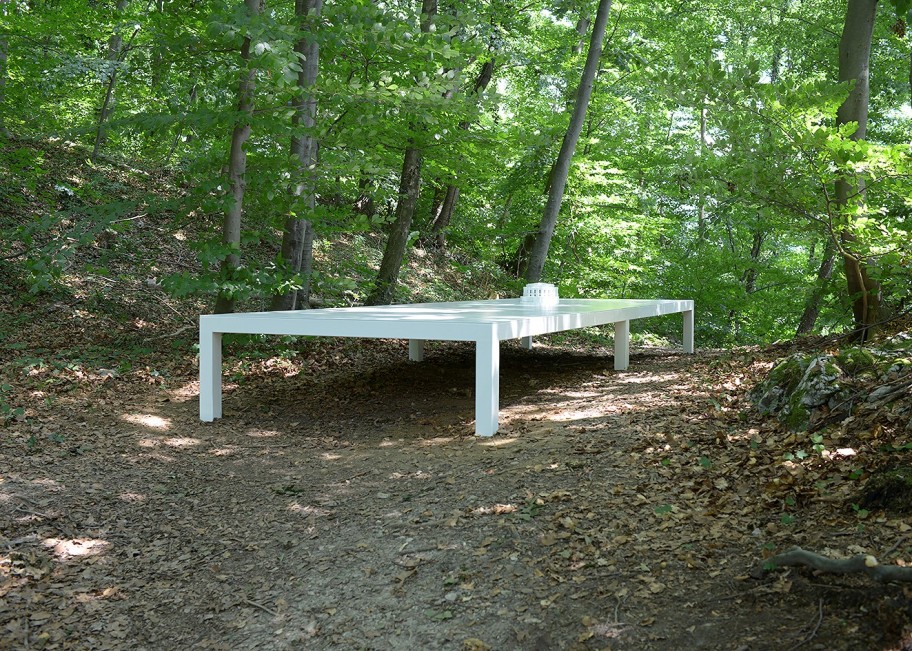 The numerous site suggestions and plans for festival theatres discussed during the past 130 years demonstrate the major importance which has always been accorded to the building of such a festival theatre.

The historical Festspielhaus projects reflect both the visions of individual persons and the differing expectations of their times and societies. The four festival theatre designs selected for this project – beginning with that of 1890 – refer to outstanding locations on the city’s mountains (Mönchsberg and Kapuzinerberg) or elevations (Hellbrunn, Rosenhügel in Mirabellgarten), but treat these contexts in very different manners.

The starting point for the intervention of Werner Feiersinger is the historical plaster model for a festival theater by architect Otto Reitter from 1942. The model is very small in relation to the space of the table. This reverses the intended, monumental conception by Otto Reitter, who wanted to put an oversized building into the landscape of the Kapuzinerberg as a gesture of the demonstration of power, and shows the megalomania of the Nazi regime.

Inspired by the plasticity of the model at the Salzburg Museum, Werner Feiersinger transforms it into a partial object of his remarkable artistic concept. In an aesthetic setting typical for this artist, he creates a work of art which points to the planned historical design through an apparently trivializing, playful copy of the model, irritating the viewer. By positioning his work near a popular viewpoint and making it available to visitors, the object becomes a place for communication.

Dreaming of a Fairies' Temple