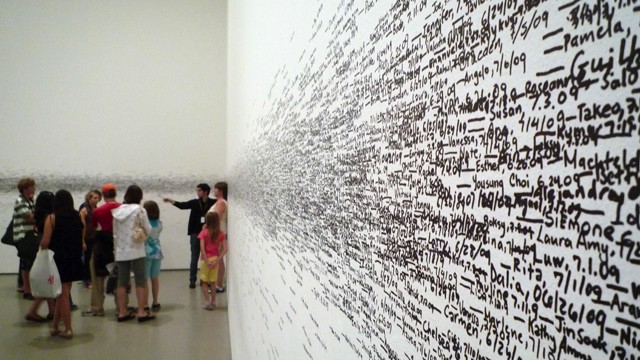 Roman Ondák takes the familiar elements of everyday life and reframes them to surprise our expectations and perspectives. He investigates social codes, conventions, rituals and forms of exchange by discreetly dislocating objects, ideas and actions from their usual settings. His installations, performances and interventions are sometimes scarcely distinguishable from the context in which they are presented. Often humorous, they provoke a double take by viewers, making them question their preconceptions and modes of interaction.

Ondák’s celebrated work Measuring the Universe (2007) begins with an empty gallery space. Equipped with a black felt tip marker, gallery attendants mark the height, name and date of each visitor who enters the space. As the blank walls transform into a universe of marks, a dense, dark mass congregates at the average height of participants, transforming a common family tradition into a portrait of Parramatta.

An undeniable favourite from Project 27: 13 Rooms, Swap (2011) merges art with everyday life. Ondák selects a performer to sit behind a table akin to a vendor in a marketplace. Setting in motion an endless chain of barter and exchange, the performer invites each visitor to swap an object for the one on his table. Finally, at the close of the exhibition, the last performer takes with him/her the final object of the day.

Adding a personal element to the project, and evoking the presence of the Slovakian artist in Parramatta is Terrace (2014), a work created especially for Project 28. An exact replica of the artist’s own terrace in his post-war Central European apartment, this work provides a shift in perspective for viewers as they navigate the exhibition.