Alessandro Balteo-Yazbeck: All the Lands from Sunrise to Sunset 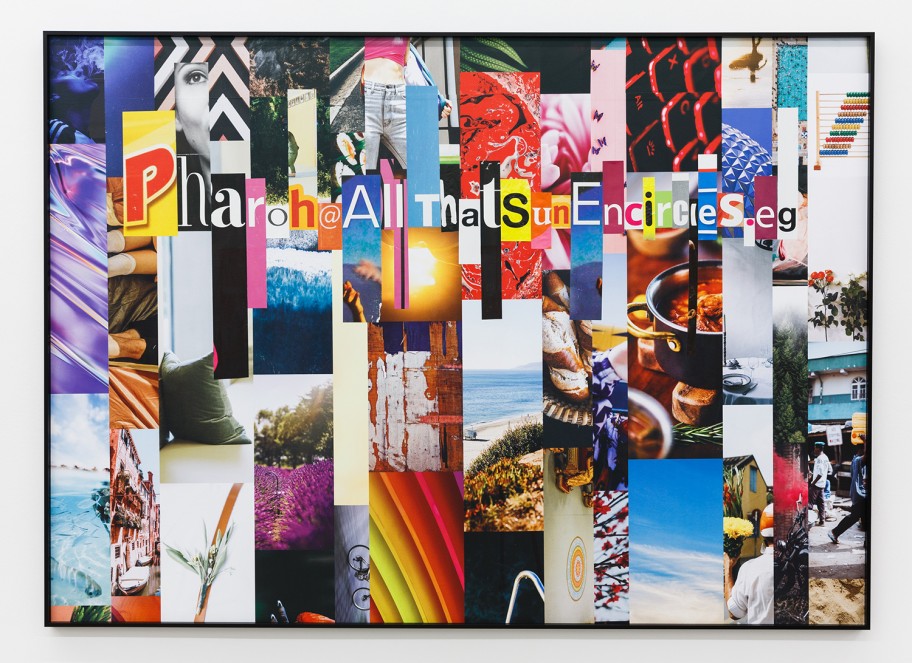 Alessandro Balteo-Yazbeck
Pharoh@AllThatSunEncircles.eg., From the series All the Lands from Sunrise to Sunset, 2018
paper collage on wood
118 x 164 cm 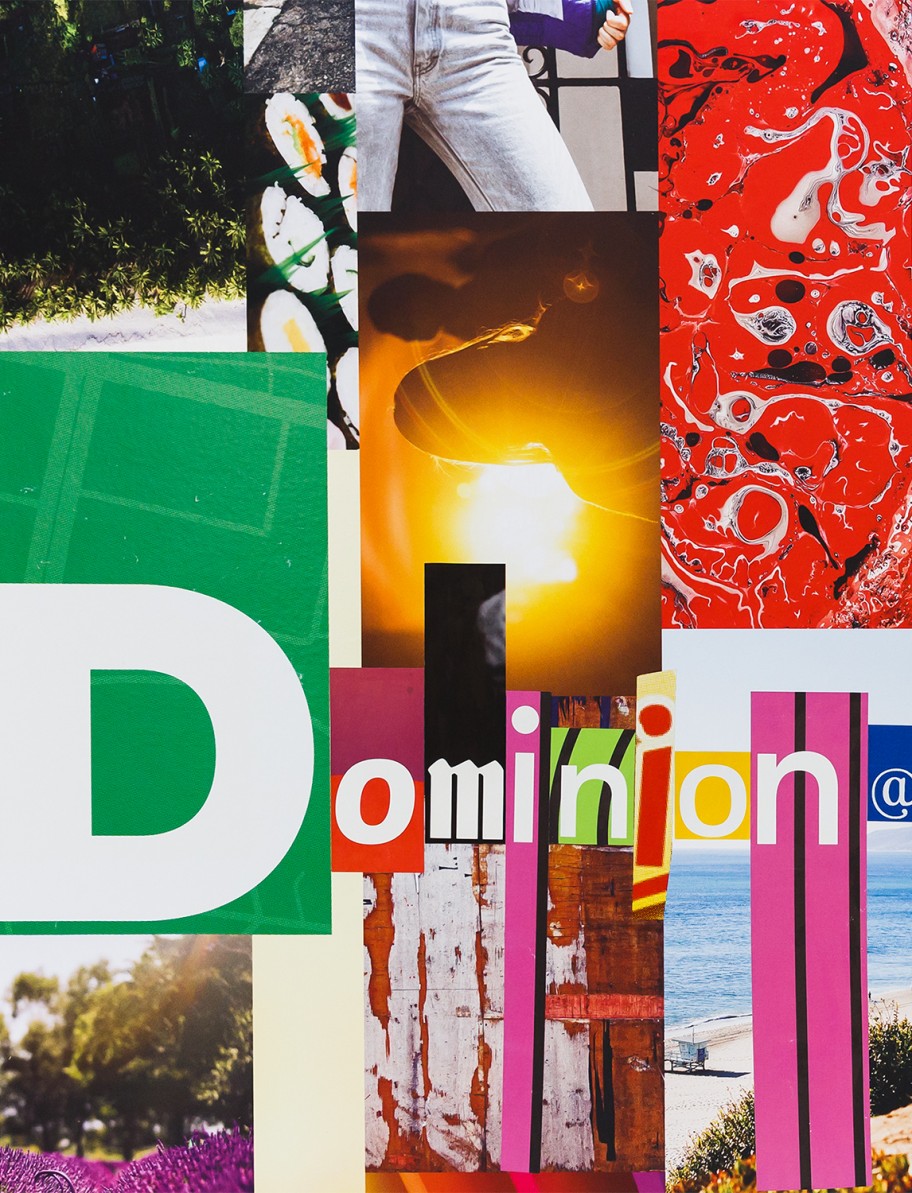 Alessandro Balteo-Yazbeck
Dominion@Planet.com, 2018, From the series All the Lands from Sunrise to Sunset (Detail)
paper collage on wood, commissioned by Sharjah Art Foundation
75 x 157 cm 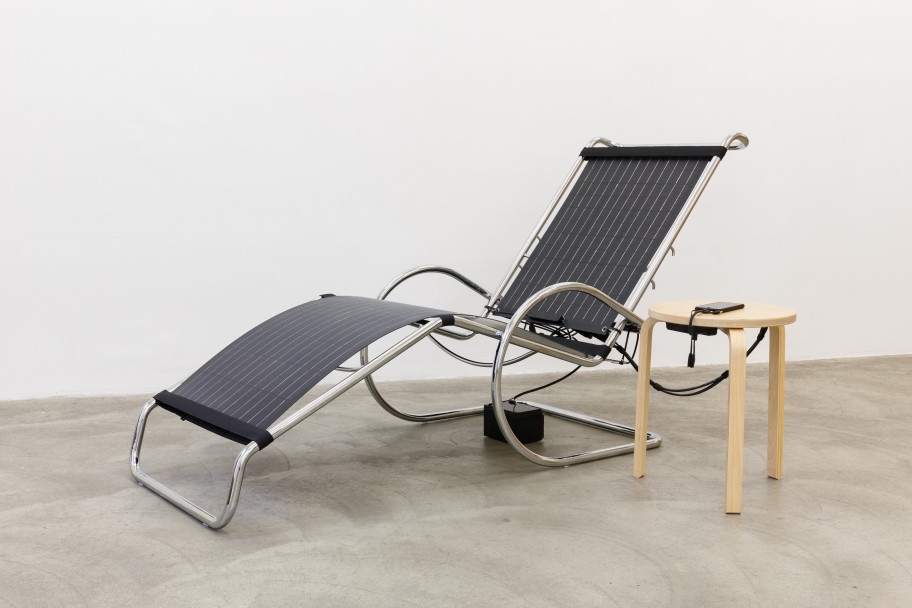 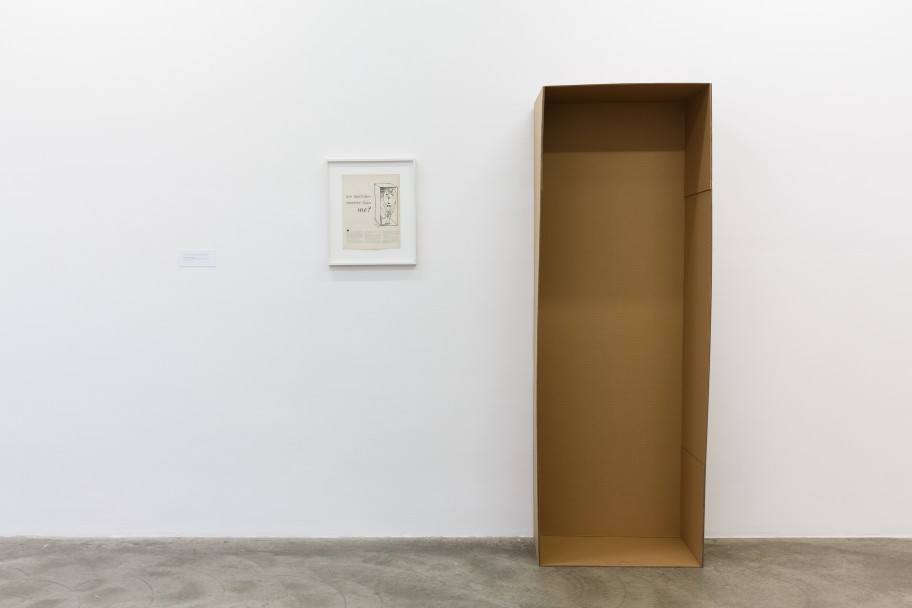 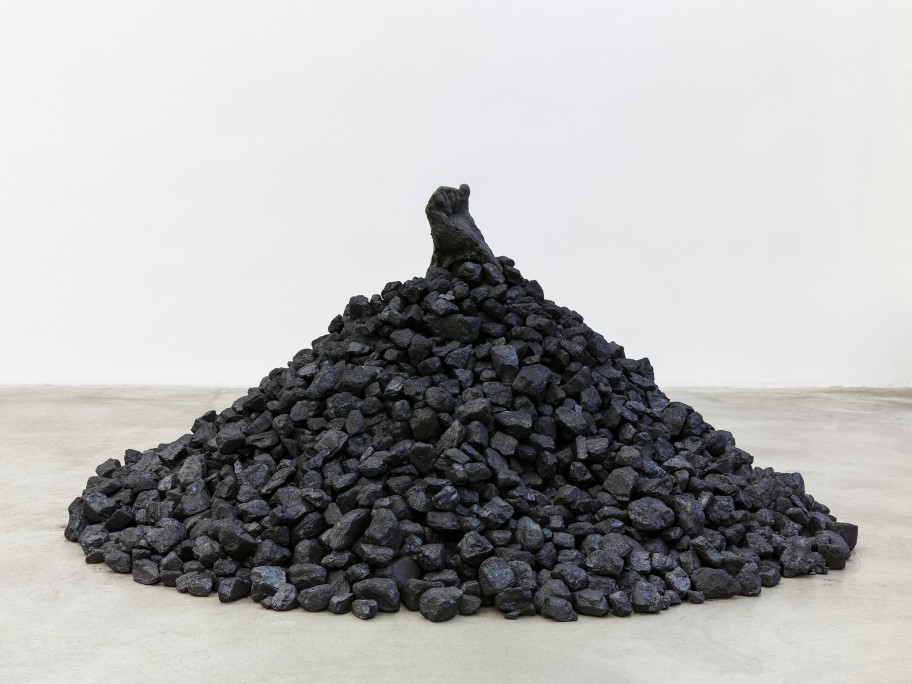 Alessandro Balteo-Yazbeck in collaboration with Attilio Napolitano (b. Modica 1936)
Carving coal since 4000 BC. From the series All the Lands from Sunrise to Sunset, 2018
Acrylic paint on centenary olive wood carving over a coal pile
carving: 20 x 17 x 17 cm; coal pile installation dimensions variable 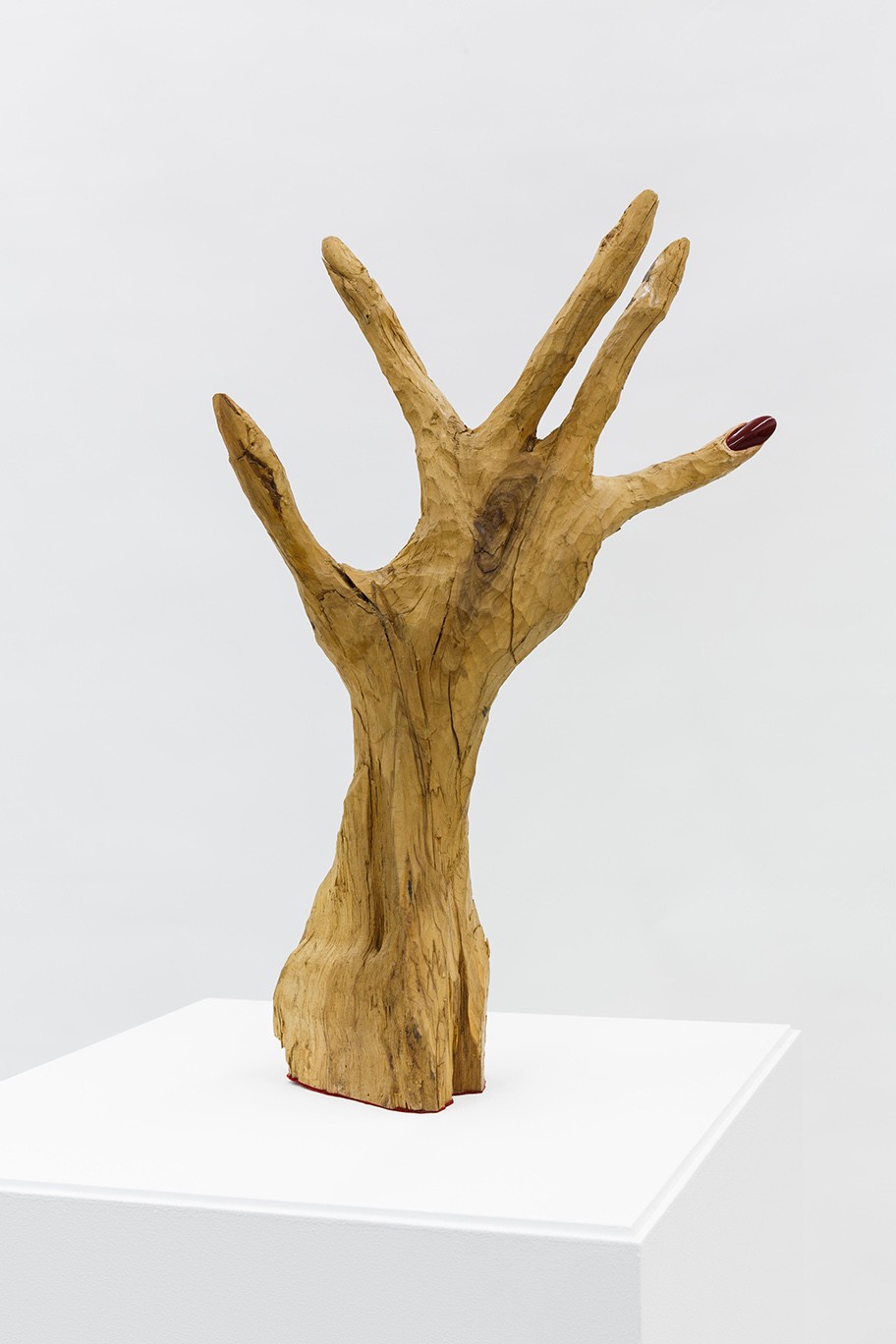 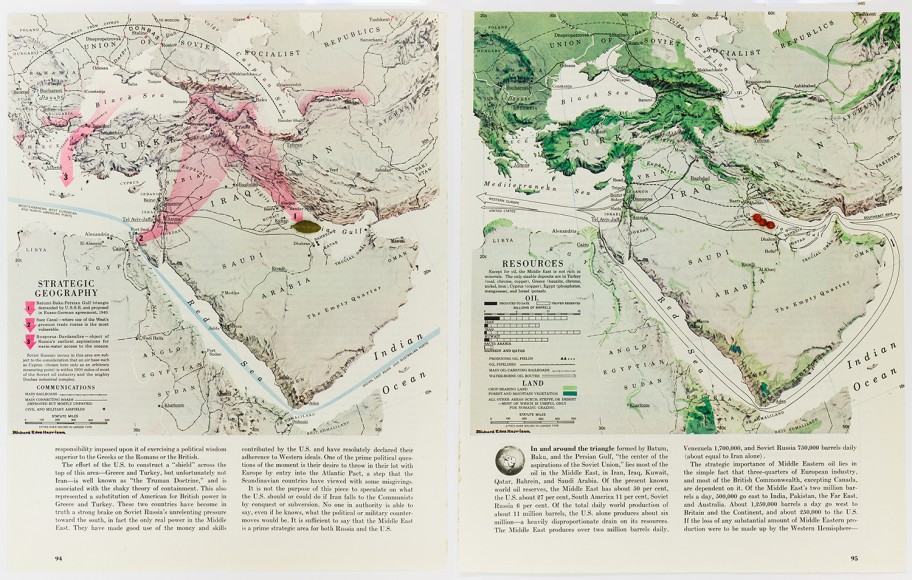 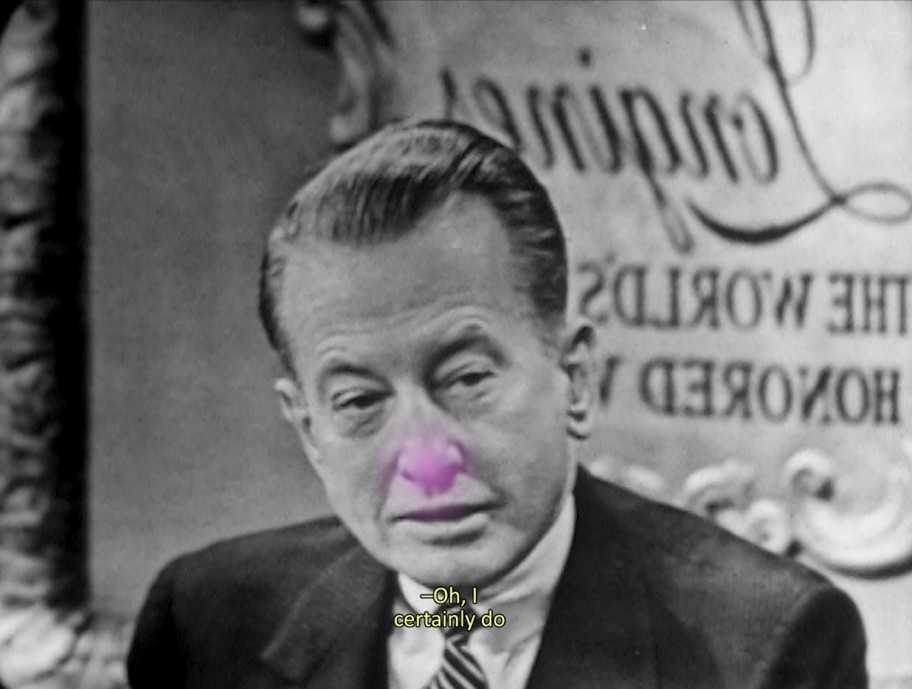 One shouldn’t be surprised by the apparent repetitions in human history; on the contrary certain patterns can be understood as nature expressing itself. Alessandro Balteo-Yazbeck seems inclined to identifying some of these patterns, as provocative as they may be. Distilling irony into humor, he focuses on the human nature behind cyclical events of history. Analyzing the domineering modern Western worldview, he proposes an understanding of contemporary global culture as one more entangled, more decentered and more tongue in cheek.

For his third solo exhibition at Galerie Martin Janda, Balteo-Yazbeck has collaged and assembled materials and topics from advertising, propaganda, the news, social media, sleek technologies and even interior design. He has also enlisted some artist-friends by including their works, thereby adding to each other’s anthropocentric anxieties. In his most recent series, All the Lands from Sunrise to Sunset (2018), different iterations of this age-old maxim evoke the evolution of hubris for more than four thousand years up until the present. Spelled in extremely colorful collages and encoded as hashtags or email addresses such as Britain1821@SunNeverSets.co.uk, they resemble cut-out-letter ransom notes.

This series includes sculptures carved in olive wood and shaped as human hands, originally created by Attilio Napolitano, that Balteo-Yazbeck has nonchalantly intervened in different ways. Also part of the series, the small installation Backup (2013), originally made by Judith Sönnicken is now shown against a photo-collaged background, refers to our shared anxiety over losing digital archives. These three-dimensional works confront us with disparate technologies parading as human practices in our contemporary civilization – from ancient Chinese formulas for nail polishing and shellac, to coal as a fossil fuel, cellphones and GPS.

These themes refer back to some of Balteo-Yazbeck’s preceding work, which likewise addresses the uneven development of technological ecosystems. Such is the case of Warao Chinchorro (2014), an installation featuring a framed, slick photograph by Holger Niehaus resting peacefully on a handmade palm fiber hammock – a furniture type produced by the Warao, an indigenous group living in the Orinoco river delta. This and other installations in the exhibition could pass for post-conceptual exercises were it not for the humor and wit the artist deploys to point to contemporary topics. In these works, color is almost absent. Black is perhaps the only formal element shared by this selection of ready-made objects or materials, but it is used only to be countered. For example, in Chronoscope, 1952 or 1953, 11pm. (2017), a TV broadcast from CBS’s Longines-sponsored public affairs show featuring a troublesome political discussion is projected in its original black and white version, which the artist disrupts with pink stains at particularly hopeful moments. A matching pink carpet arrangement for the viewers to sit on 'really ties the room together'...

Humor is oftentimes a coping mechanism. But when used regularly and consistently, it also functions analytically by helping us focus on subjects we would otherwise choose to ignore. Humor is, after all, an ancestral subversive tool with roots lost in time and context. And as the works included in this exhibition seem to imply, we may need to hold on to this subversive human trait in the impending future.

Alessandro Balteo-Yazbeck, *1972 in Caracas, lives and works in Berlin.

All the Lands from Sunrise to Sunset (2018) was supported by Sharjah Art Foundation and partially exhibited at the Sharjah Biennial 14, 2019.