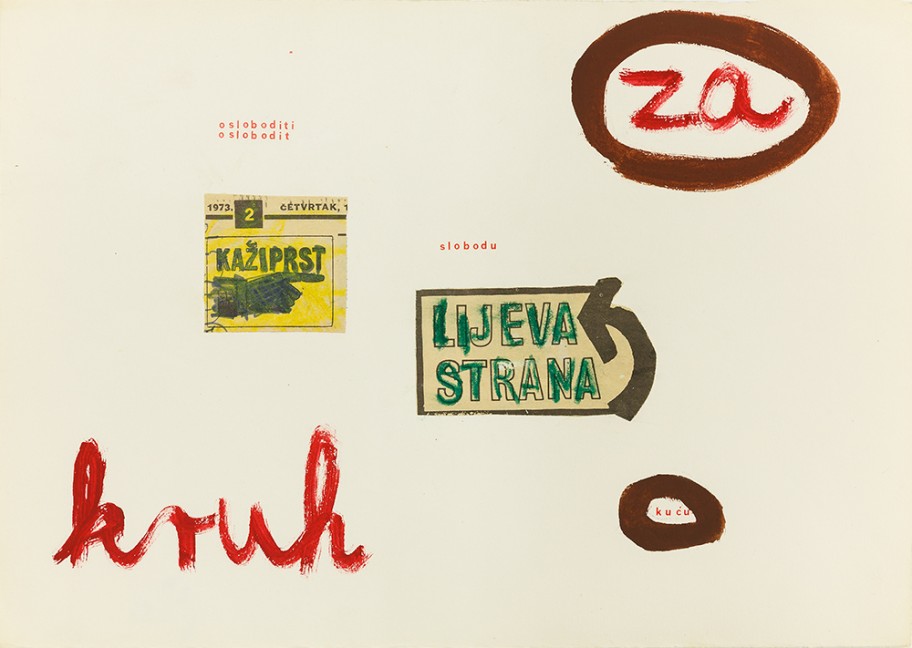 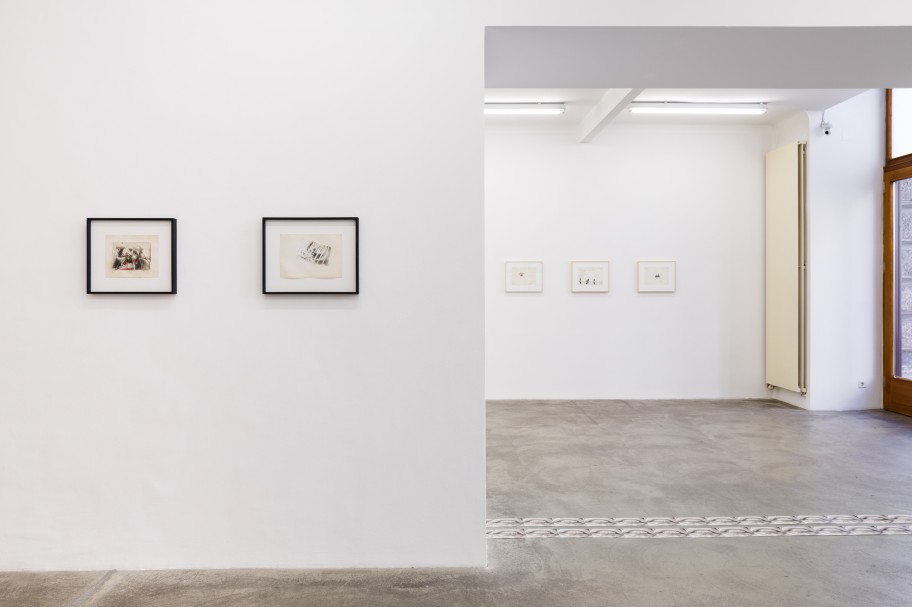 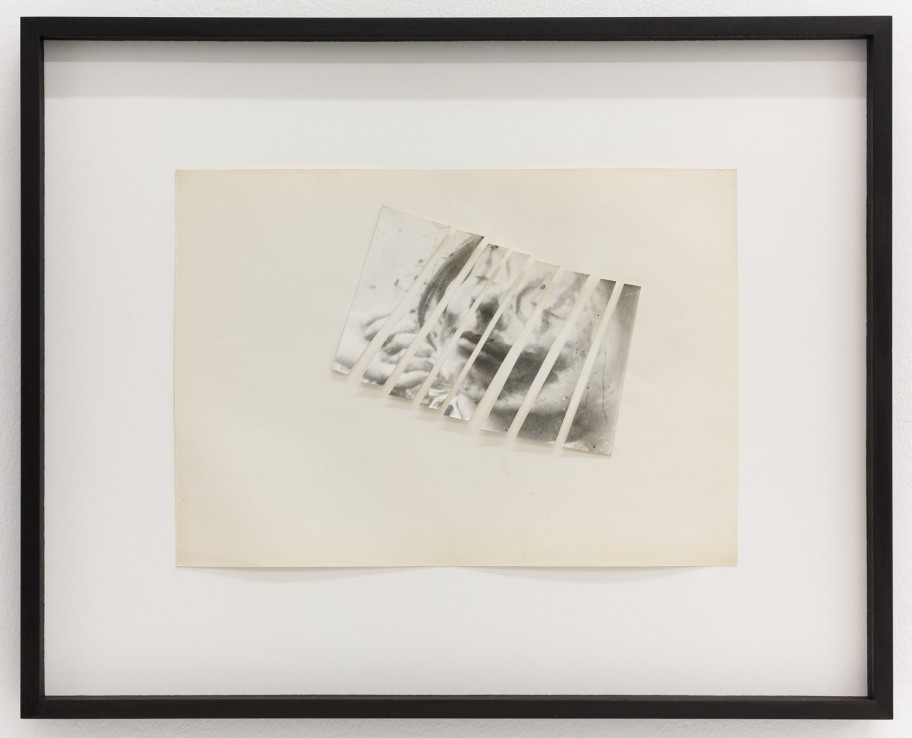 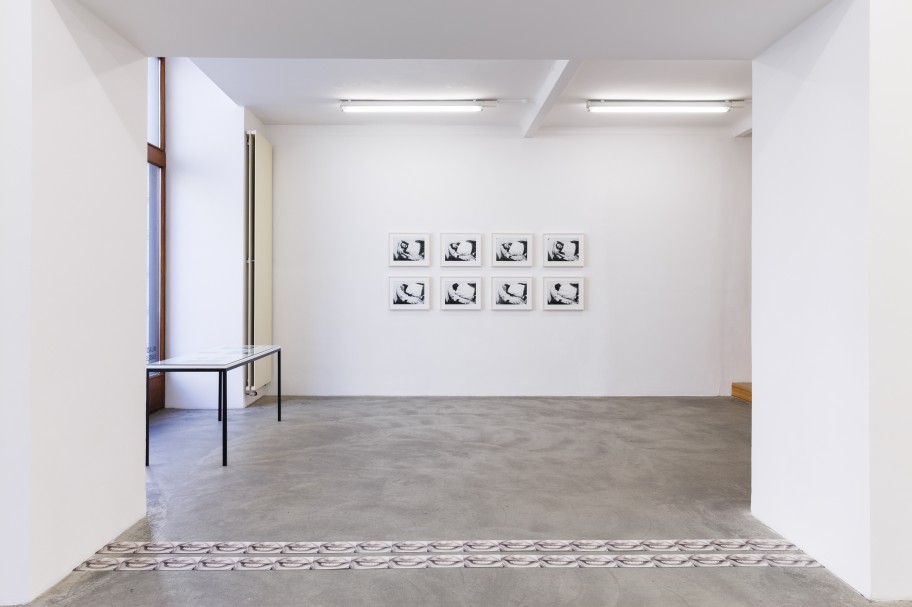 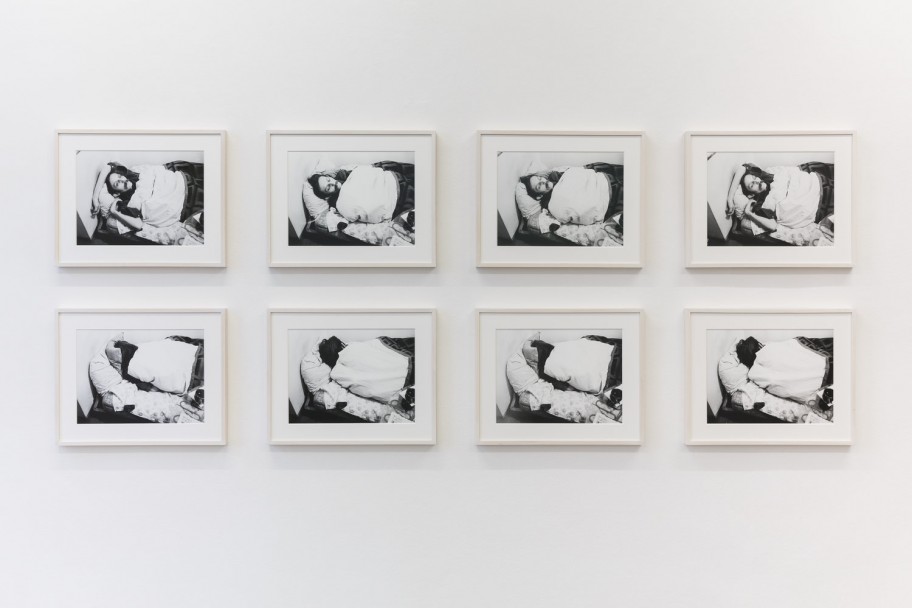 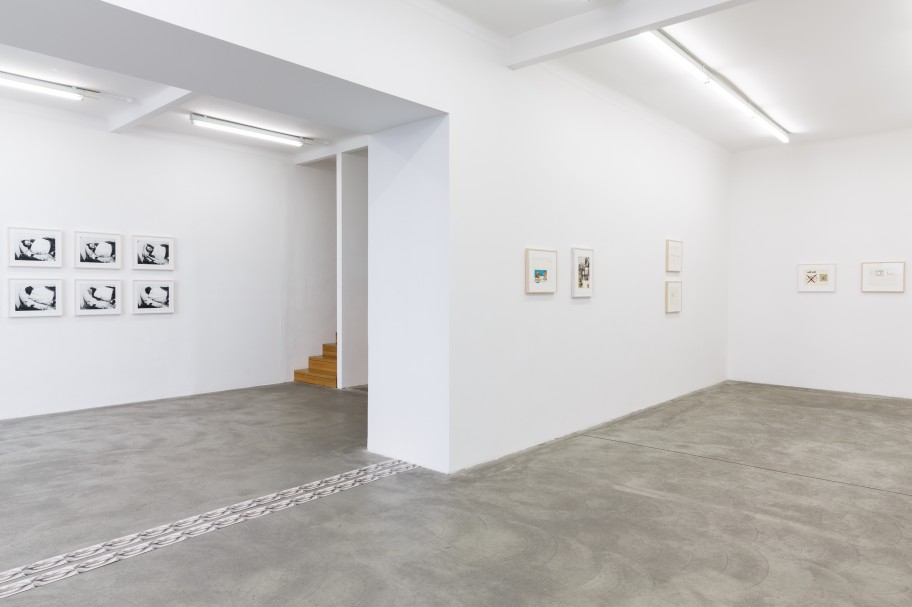 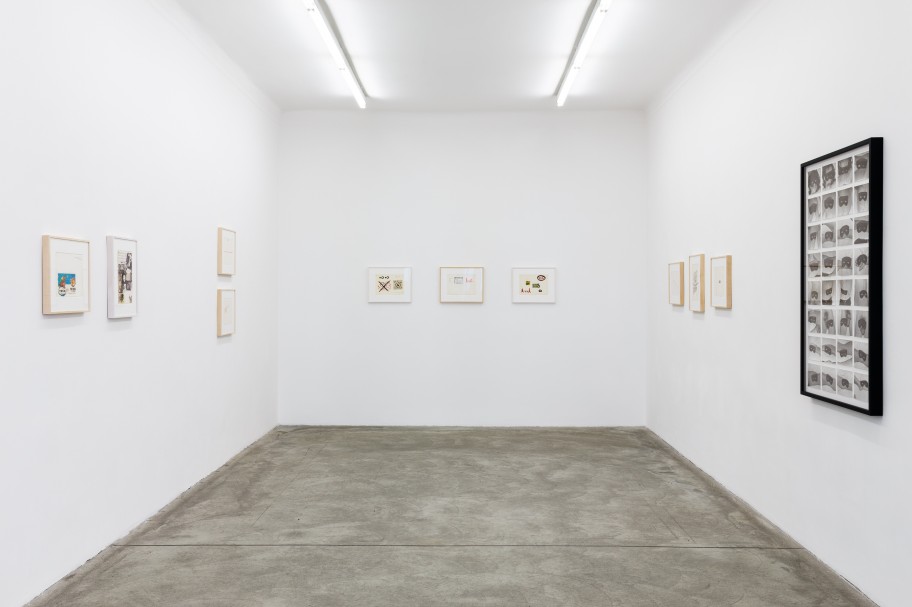 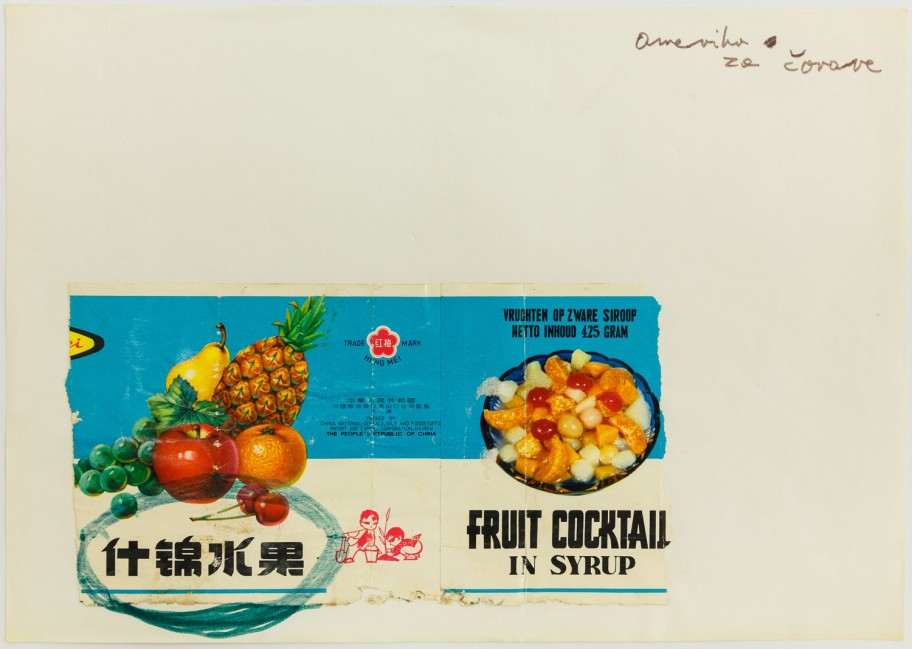 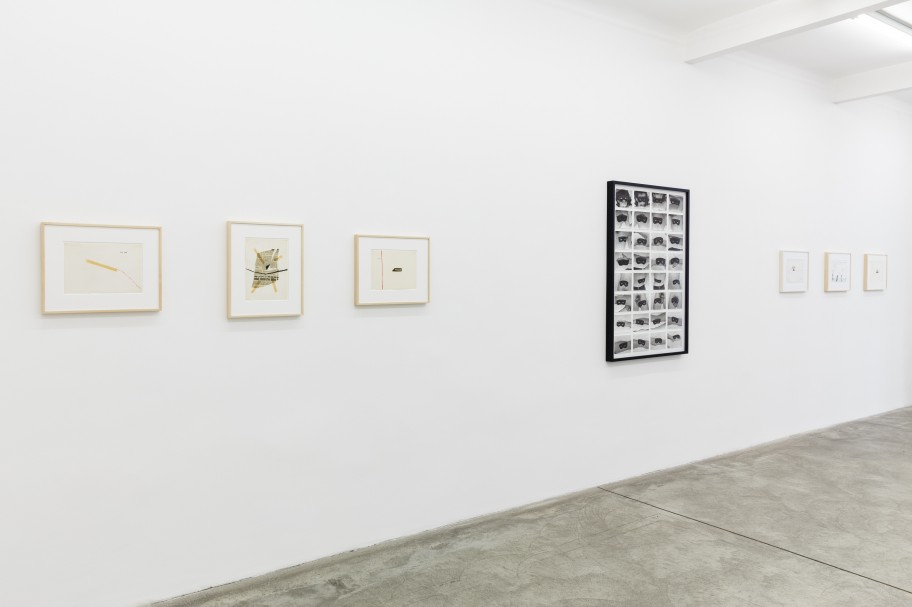 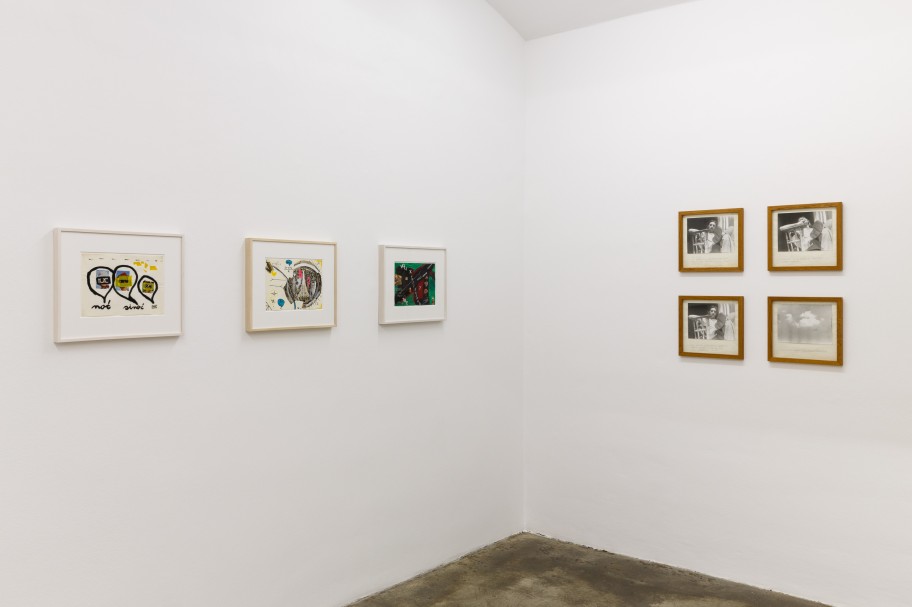 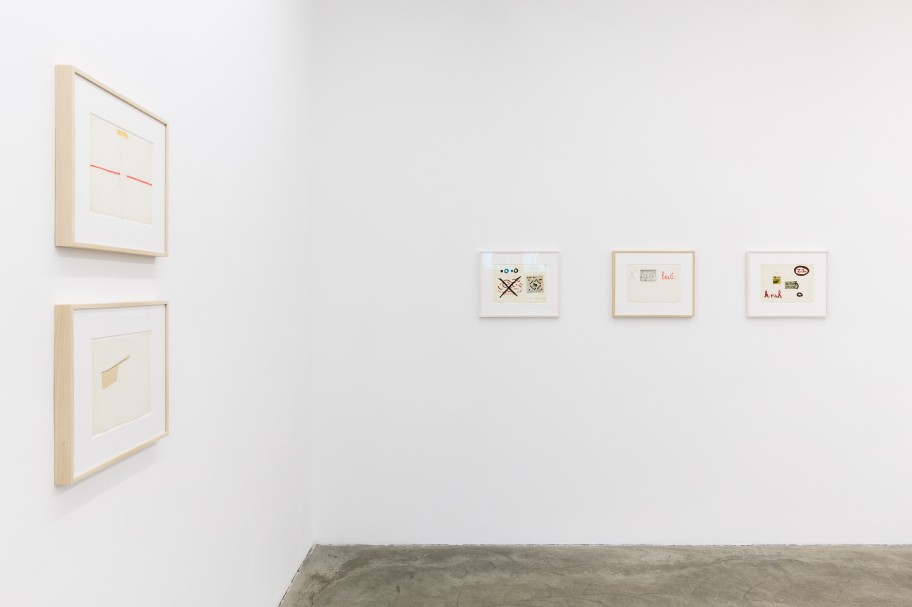 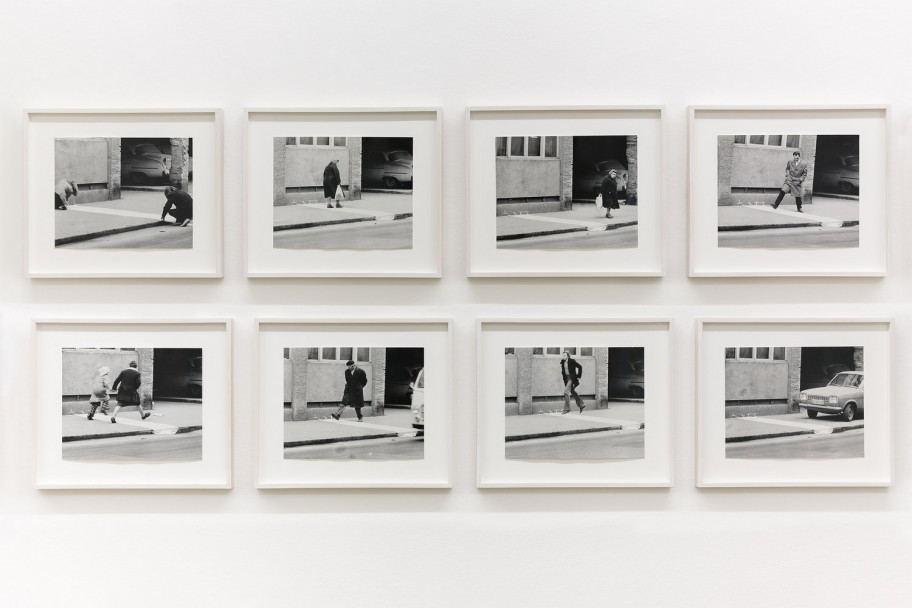 Photographs of a model’s smile from Burda women's magazine glued to the gallery floor, which visitors have to step on or jump over, welcome us to Mladen Stilinović's third solo exhibition at the Galerie Martin Janda.

The exhibition presents a selection of works from the 1970s: early collages, photo series and photo actions performed in public space, and films.

In the late 1960s, Mladen Stilinović wrote poems and started making experimental films with the student group Pan 69, and later he presented works with the Group of Six Artists in the streets and squares of Zagreb. He made a number of collages on A4 paper which reveal both a poetic and conceptual approach. Montage as an element of cohesion is present in the collages, while film dramaturgy is present in the photo sequences. In the film Primer 1, 2, 3 (1973) he asked the audience to read aloud his poem in the same manner as the signs above shops, and words and images in a fable with an unambiguous message. The photo series Cotton Pad Step (1975) looks like the script for a film and the series 1st of May 1975 documents the visual identity of the communist celebration of Labour Day, in which Stilinović inserts his personal love message… This interweaving and intermediality of his early works is the topic of this exhibition.

All the exhibited works suggest a continuous interest in various elements of everyday life. Stilinović observes poetry: the poetry of a shop-window, the poetry of newspaper headlines, the poetry of fashion magazines, the poetry of socialist design, the poetry of the simplest human actions etc. In his collages made of many materials, such as assembled newspaper fragments, photos (sometimes extracted from his films), small everyday objects and typographic elements, he suggests ideas, thoughts and actions, and he can rarely resist humour. These collaged textual images provide a social commentary in a cheerful and humorous manner with only an occasionally ironic tone.

This postconceptual artist, a representative of the New Art Practice in Yugoslavia, in his early collages reveals complex and sometimes unclear "language games" that had not yet revealed their political and ideological potential, and points to his future works. As Ivana Bago writes about these collages in Mladen Stilinović – Early Collages 1972 – 1974 : "This – as of yet unsystematized and uninterpreted – collection presents us with an unfamiliar and unwritten prehistory of the already familiar and documented history. In other words, we rummage through in order to locate the faded origins of artistic creation, and we can’t resist the urge to build bridges towards the already known. The first consumptions of red, the first to-do lists, the first boondoggles and shortages of time. The first instances of wondering about the previously unnoticed, yet daily-occurring, excesses of language."

We look forward to welcoming you!