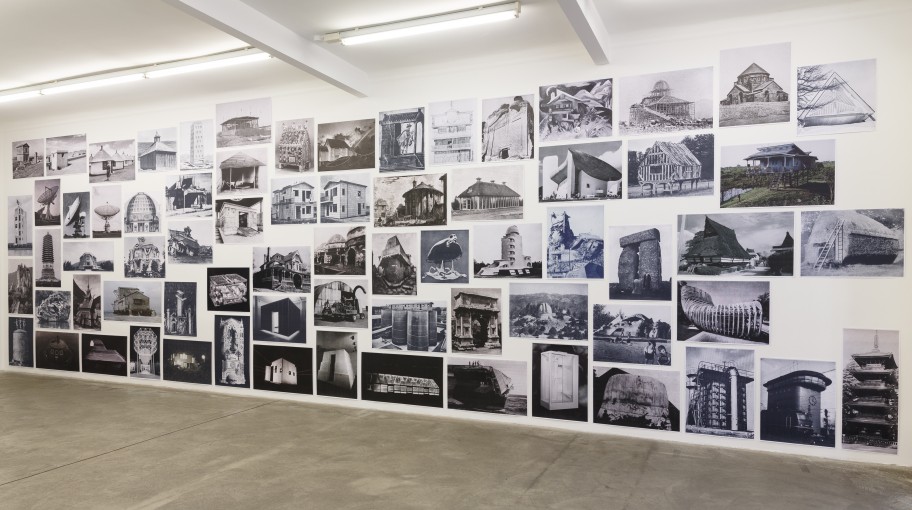 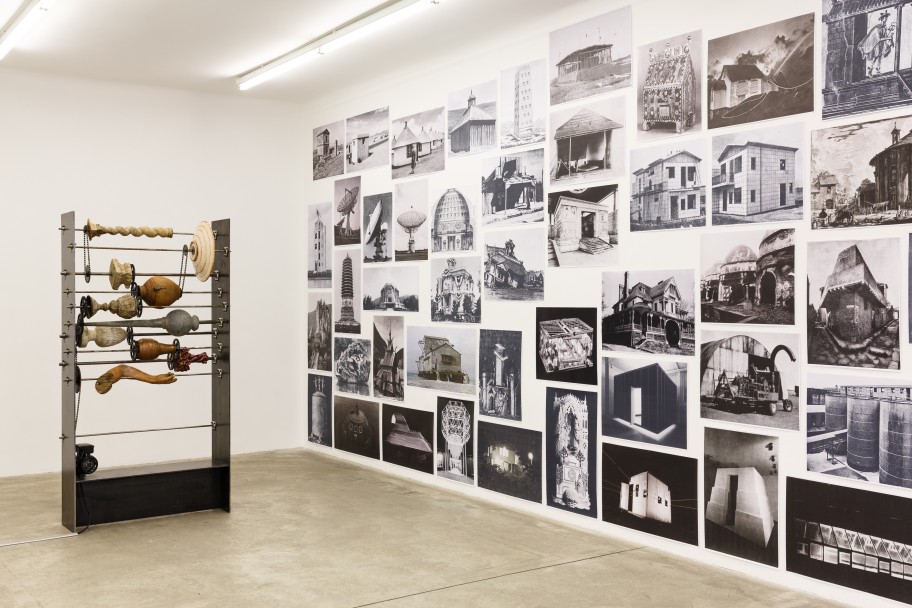 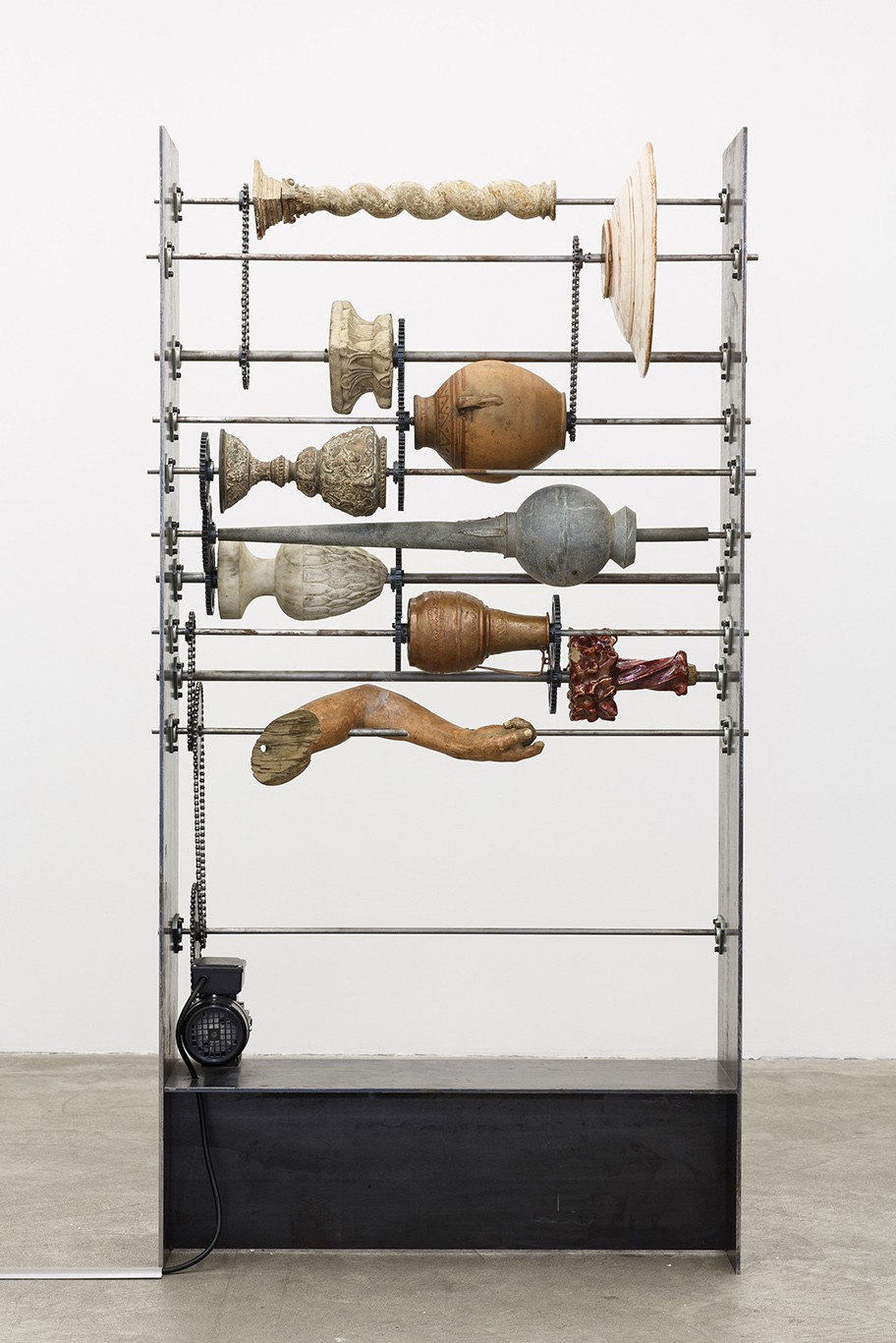 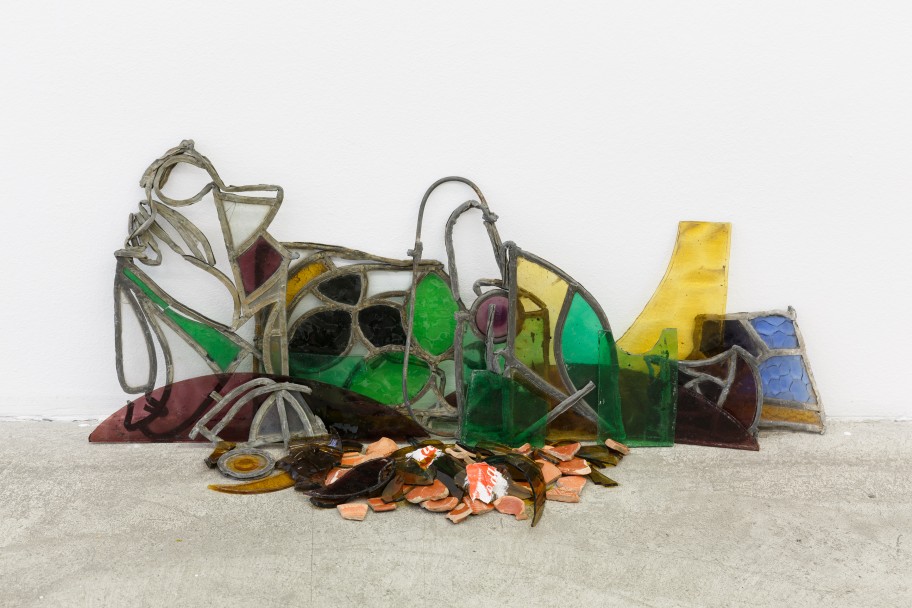 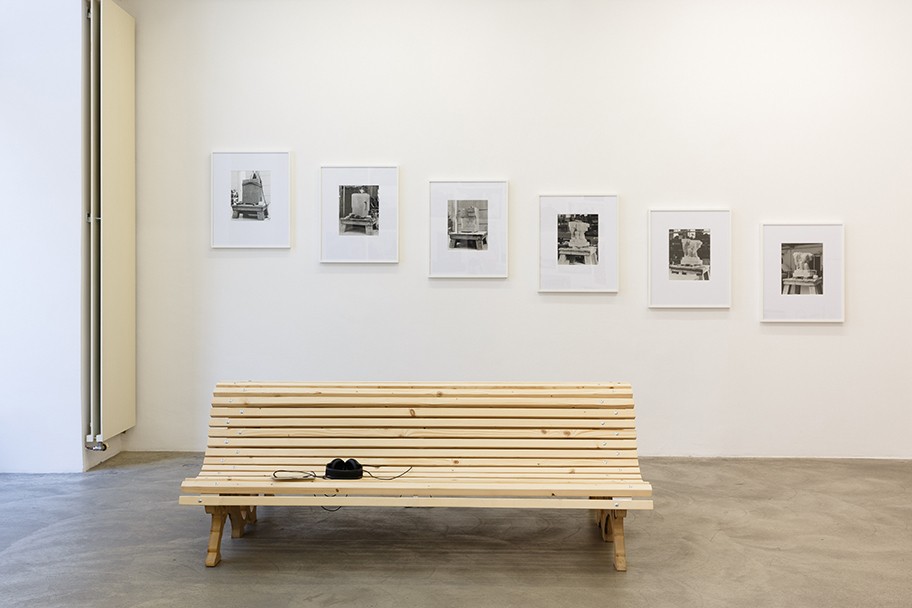 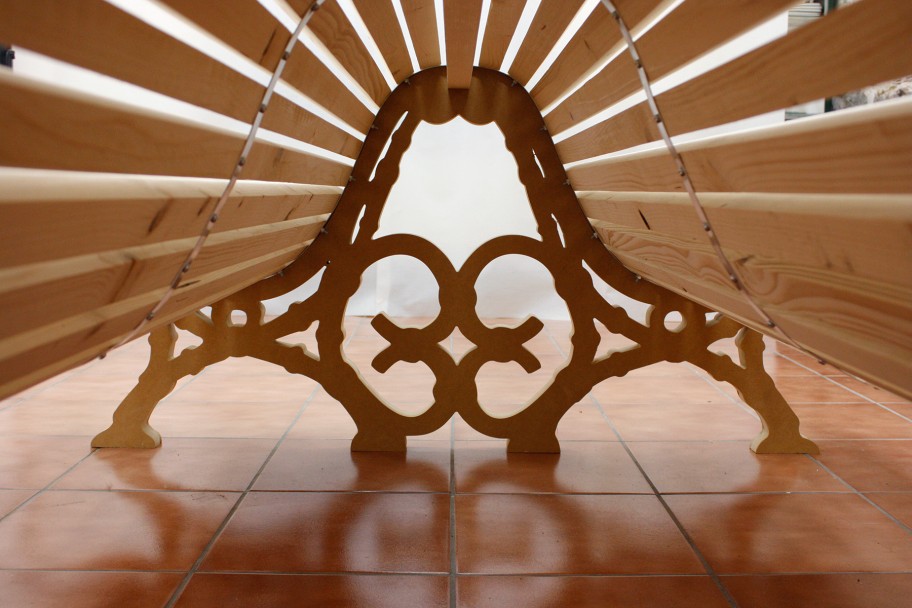 Eulàlia Rovira & Adrian Schindler
The Feet Fixed to the Ground Betray No Impatience, 2016 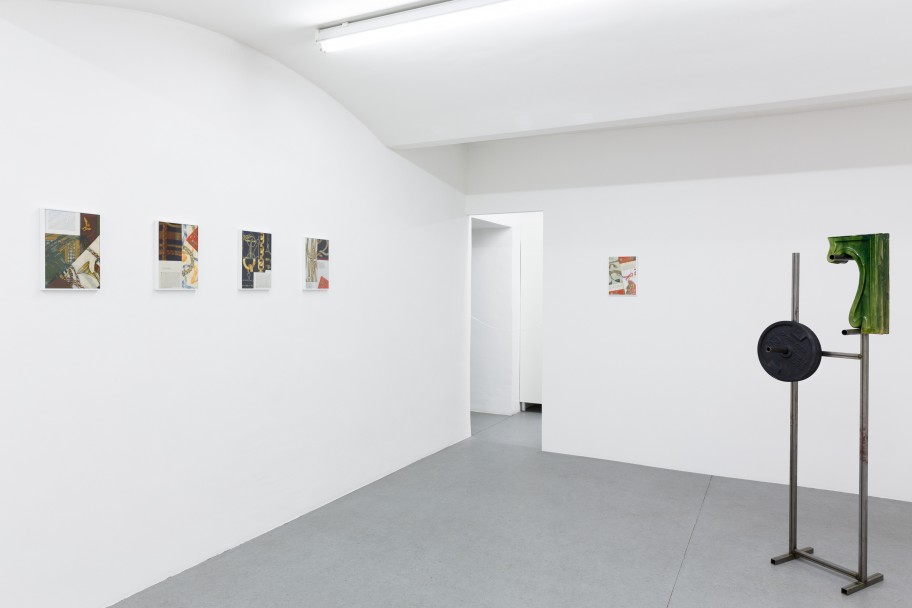 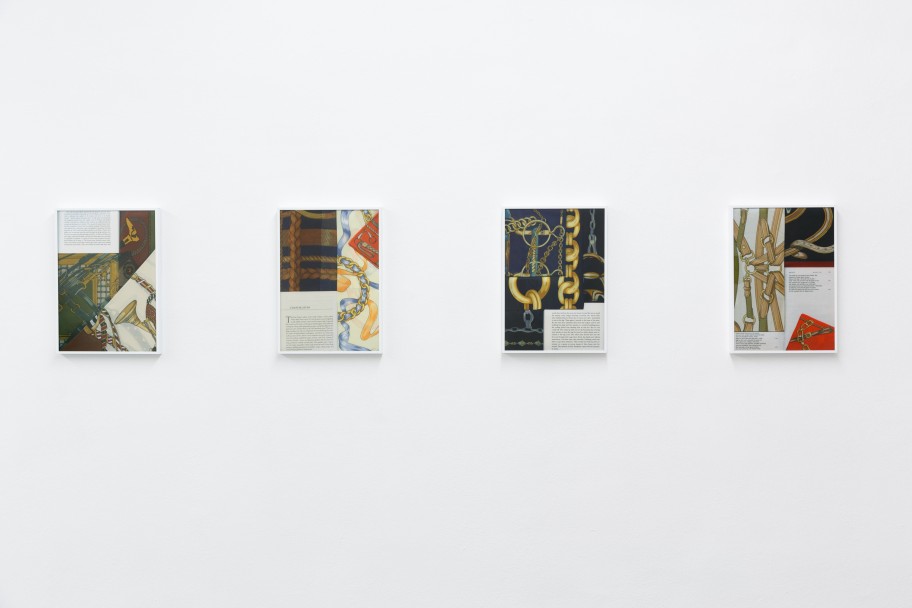 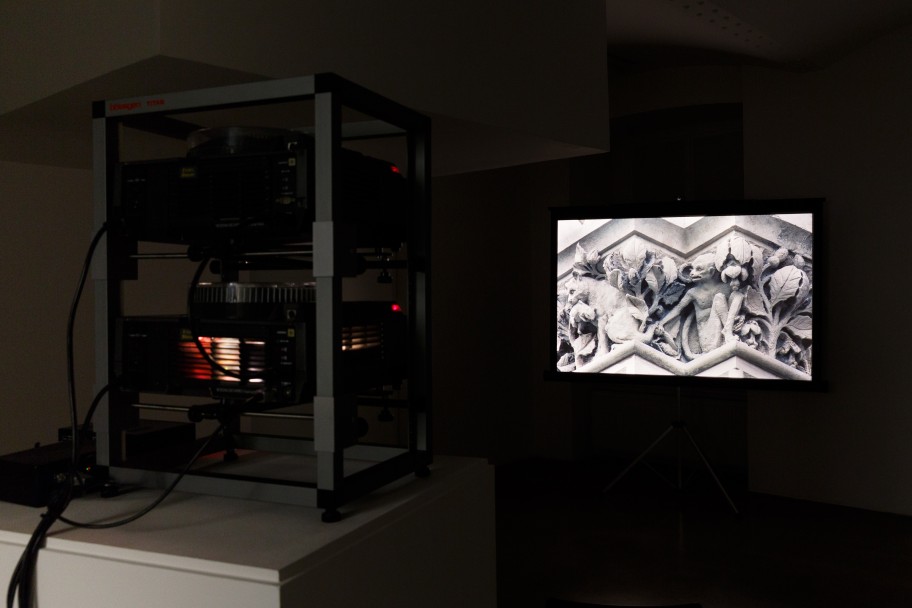 This is an exhibition that ventures into the apparently perilous middle ground between too much content and too much form, between too many nouns and too many adjectives, between too much everyday and too much artiness. Are objects or statements that are laden with information – or those that are concerned with utility above all else – at risk of appearing aloof and extorting their own importance? Undoubtedly; just as art in an abundantly ‘poetic’ mode might be deemed just too delightful and refined.

The firebrand Viennese satirist Karl Kraus (1874–1936) begins his polemical 1910 essay ‘Heine and the Consequences’ by identifying “two strains of intellectual vulgarity: defenselessness against content and defenselessness against form. The one experiences only the material side of art. It is of German origin. The other experiences even the rawest of materials artistically. It is of Romance origin. To the one, art is an instrument; to the other, life is an ornament. In which hell would the artist prefer to fry?”

The titular exclamation of the exhibition synthesises two of Kraus’s similes for what he considered the cultural extremes of monotonous functionality on the one hand and the frivolous adornment of Romance on the other. Moreover, he judged the greater treachery was to be found in Vienna’s mixing of the two. Kraus denounced the Viennese press for its flowery impressionistic journalism at a time of looming conflict, and mocked the Wiener Werkstätte’s desire to elevate everyday objects into works of art. The exhibition does not pretend to offer a commentary on present day Vienna. Kraus would certainly disapprove of it. And although his characterisation of the sobriety of Germanic culture and the good taste of Romance culture is something that we may still recognise neither is this an exhibition about cultural stereotypes.

Kraus conjures up a world of robust public debate, whether in pamphlets or cafés, and accordingly the gallery is imagined as a kind of uncanny street scene. The habitat of this exhibition is the inner information and outward appearance of architecture, urban amenities and engineering details. Such features were frequently inspired by organic shapes in fin-de-siècle Art Nouveau wherever it flourished. Indeed, natural forms make a nonsense of Kraus’s dichotomy. Drawing on strategies such as disposition, wit, redundancy, or storytelling, the artists and artworks of this exhibition conspire with seemingly mundane things and images to somehow find and invent ways to rebuff, circumvent, surpass, or mitigate the spurious alternative between indulgent contents and bad Romance.

The artworks and writings of David Bestué have often dealt with the engineering of buildings and the human body though experiments in mass and equilibrium, pragmatism and humour. His three sculptures in the exhibition are comprised of ornamental and functional objects, fragments and components that put a spin on the history of culture from antiquity, via modernism, to the present day.

The multi-part installation work by Sean Lynch confronts a byword for pretence and frivolity: a façade. Specifically, the façade of Oxford’s Museum of Natural History and the elaborate stone carvings two Irish brothers made there in the mid-1800s. Lynch recounts a tale of intricate technique and institutional subversion that centres around a monkey, parrots, and owls. It reveals how science, religion, and the arts, were intertwined and caricatured in Victorian England.

On 14th September Lynch will present an artist lecture that complements the installation.

The work of Eulàlia Rovira & Adrian Schindler features a camera-phone film based around a Barcelona park bench, as well as its sculptural reproduction. This model of street furniture is known as the ‘Romantic double’, and it inspires a narrative and a sequence of gestures that evoke the masterplans that opened up cramped European cities in the 19th-Century as well as ongoing impulses to organise public space and orchestrate the gaze.

The duo also present a new performance on 14th September which explores the popular appropriation of tribal skin decoration in conjunction with the chain and harness motifs characteristic of luxury silk scarves. A companion series of photographic prints is derived from the intertwining designs of the latter textiles.

Batia Suter presents a composition of reproductions sourced from diverse publications – including technical literature, catalogues, and magazines. It forms a web of visual dialogues under the heading of ‘shelter’, a basic human need that can assume the most elaborate of manifestations. Meticulously edited and juxtaposed, we could image Suter’s works as an entry in a transhistorical and intuitive encyclopedia-without-words, or an ineffable combinatory experiment highlighting the intellectual, symbolic, and emotional immortality of images.

The exhibition is part of curated by_2018: viennaline. The gallery festival with international curators in Vienna.