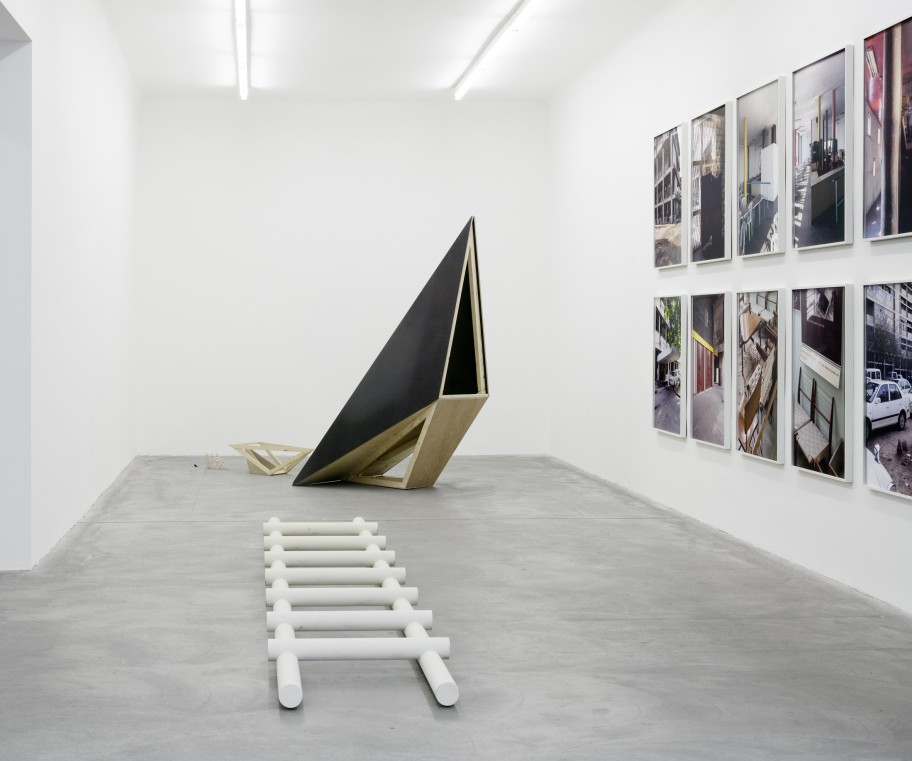 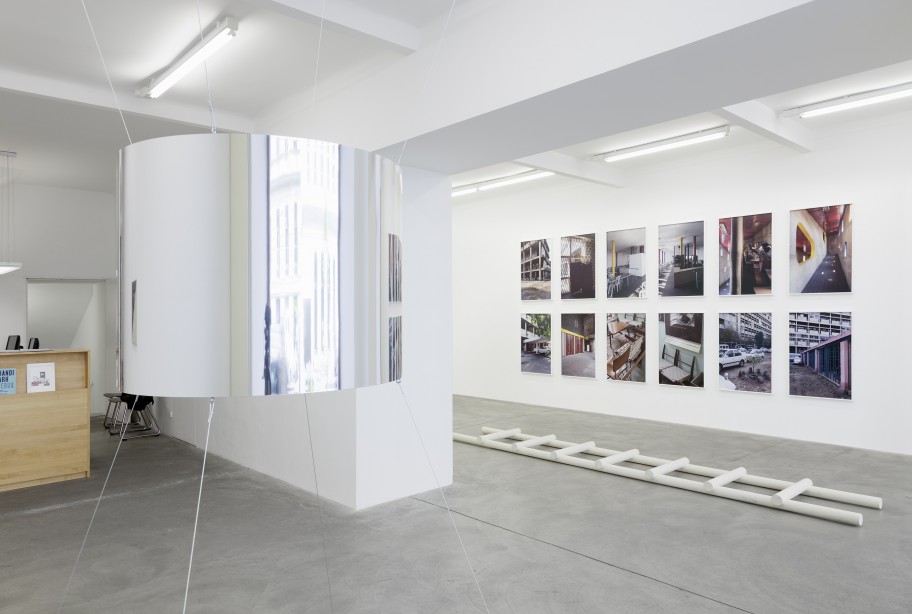 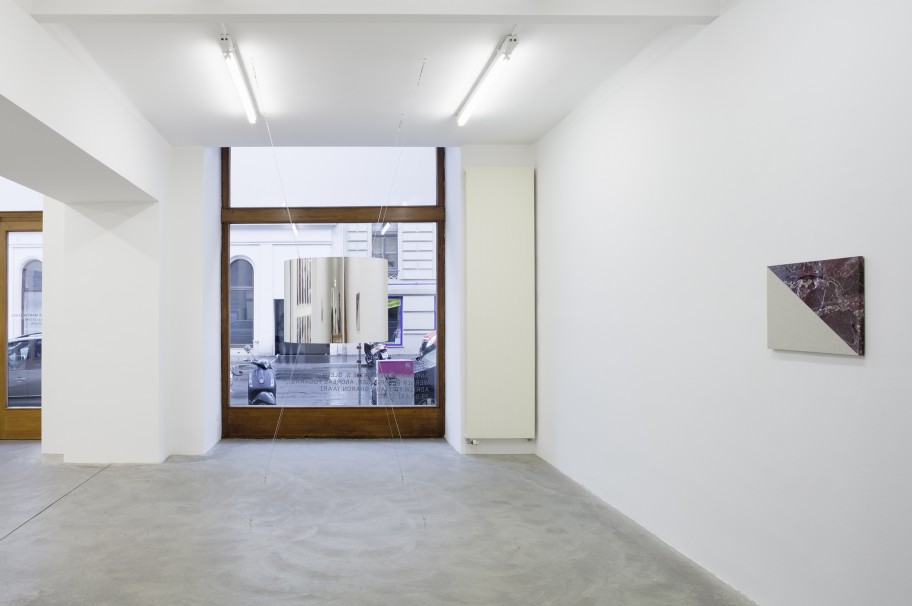 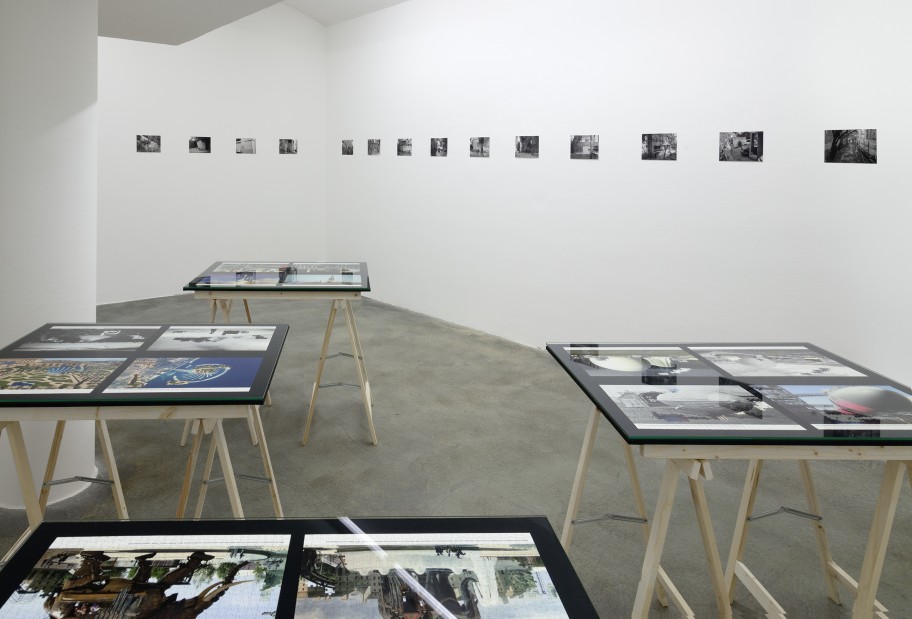 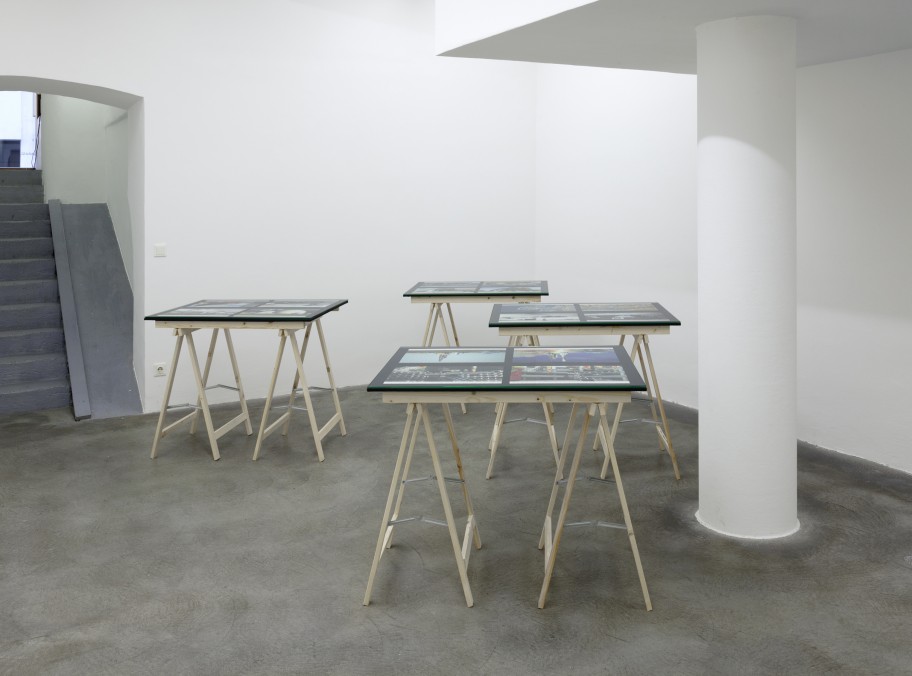 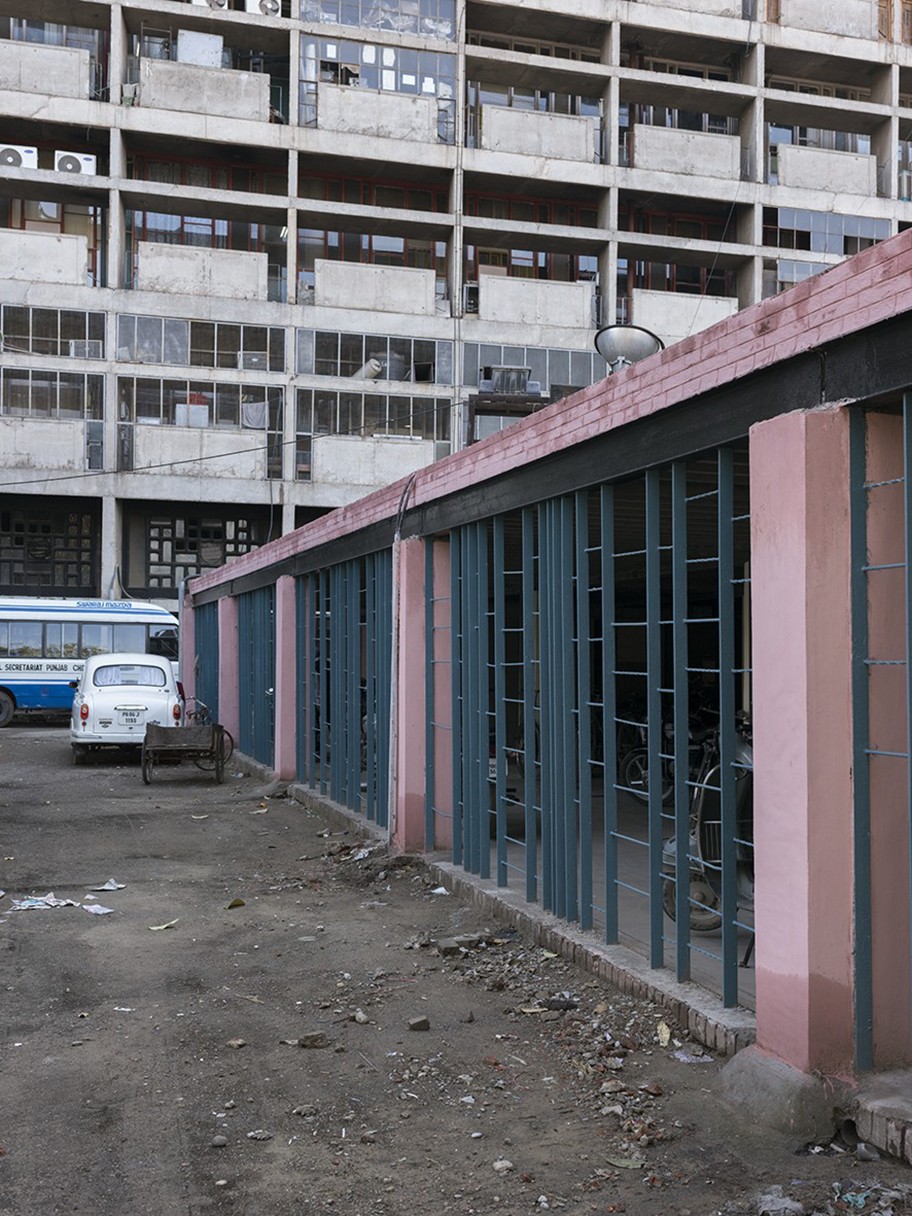 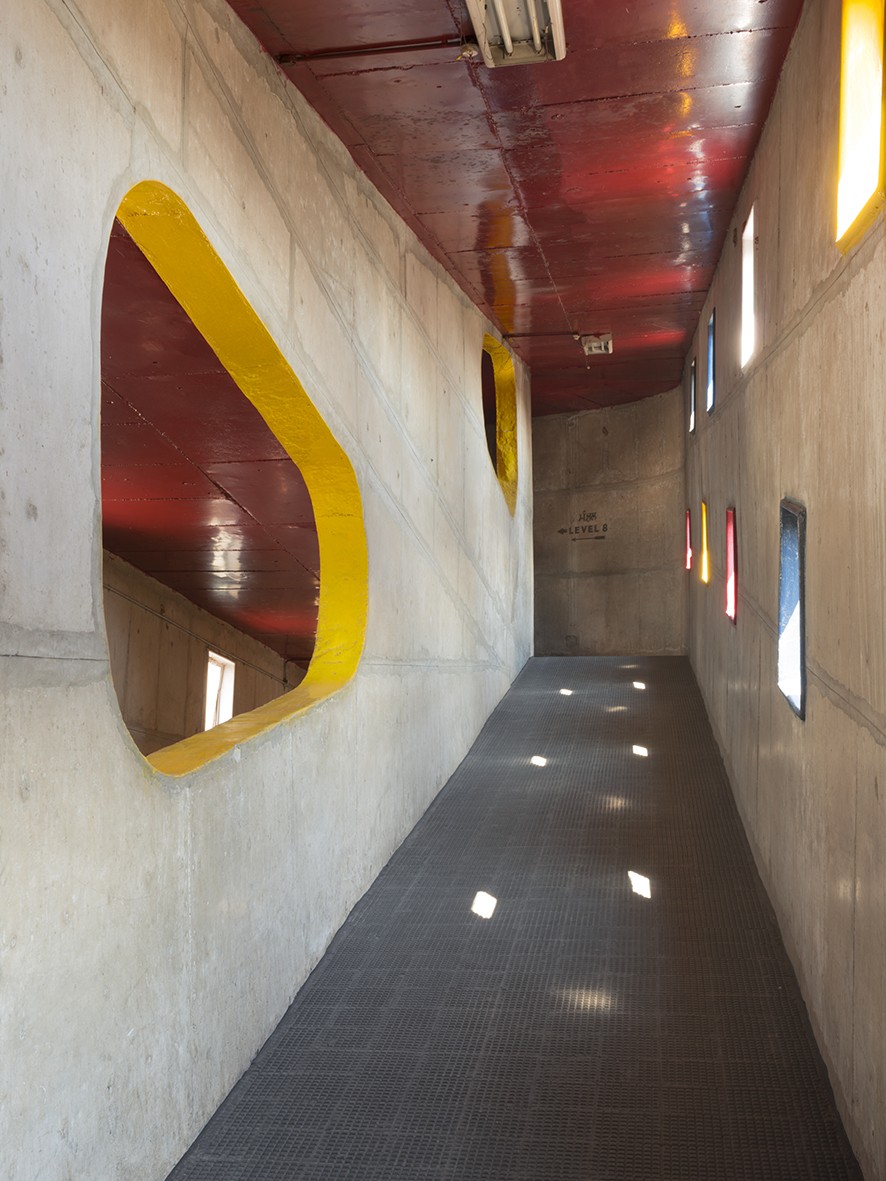 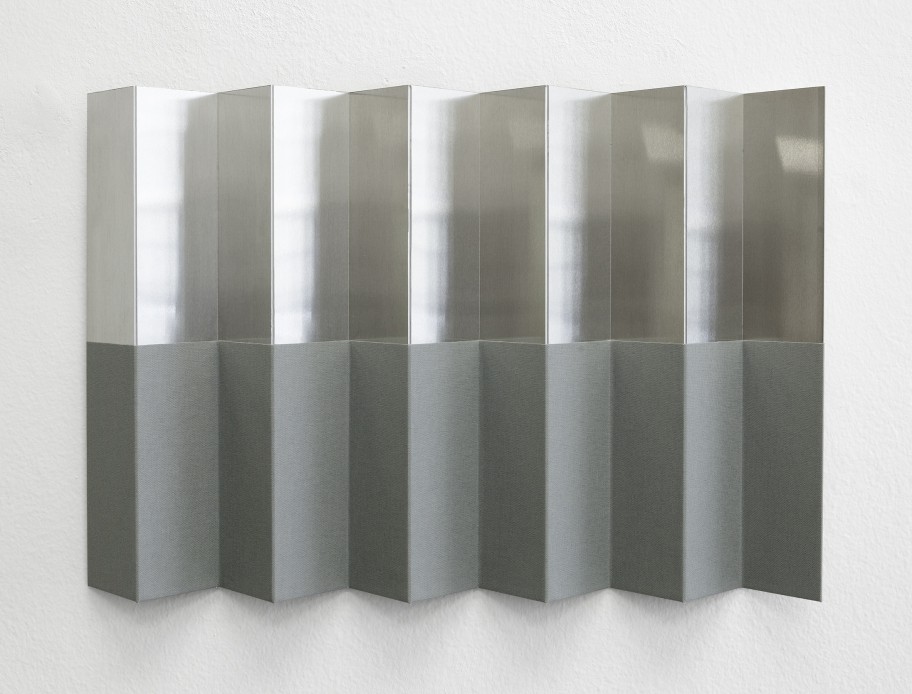 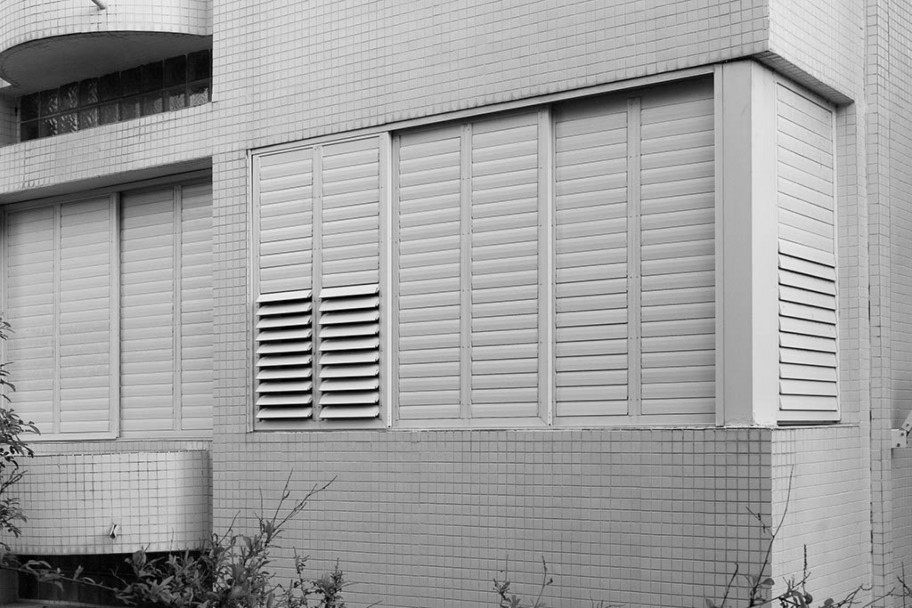 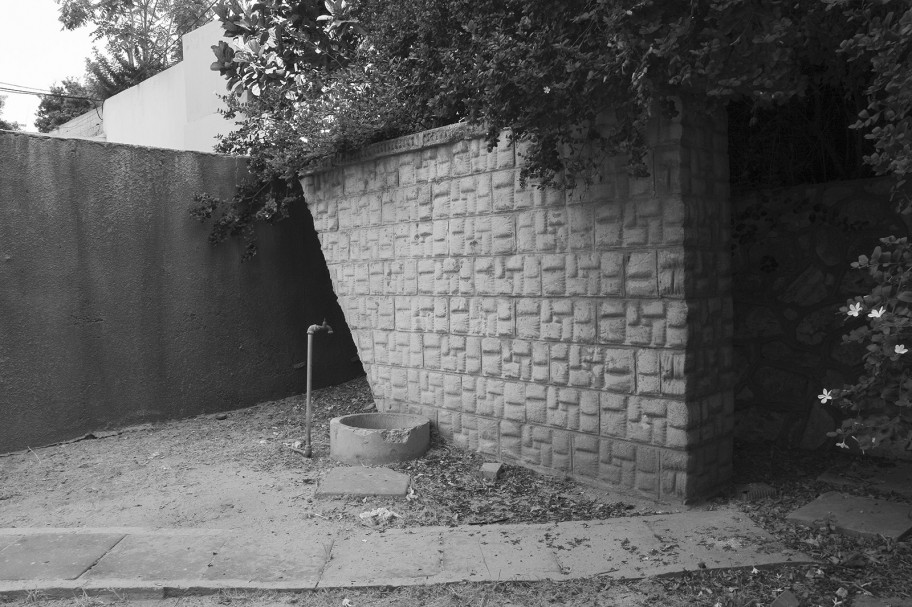 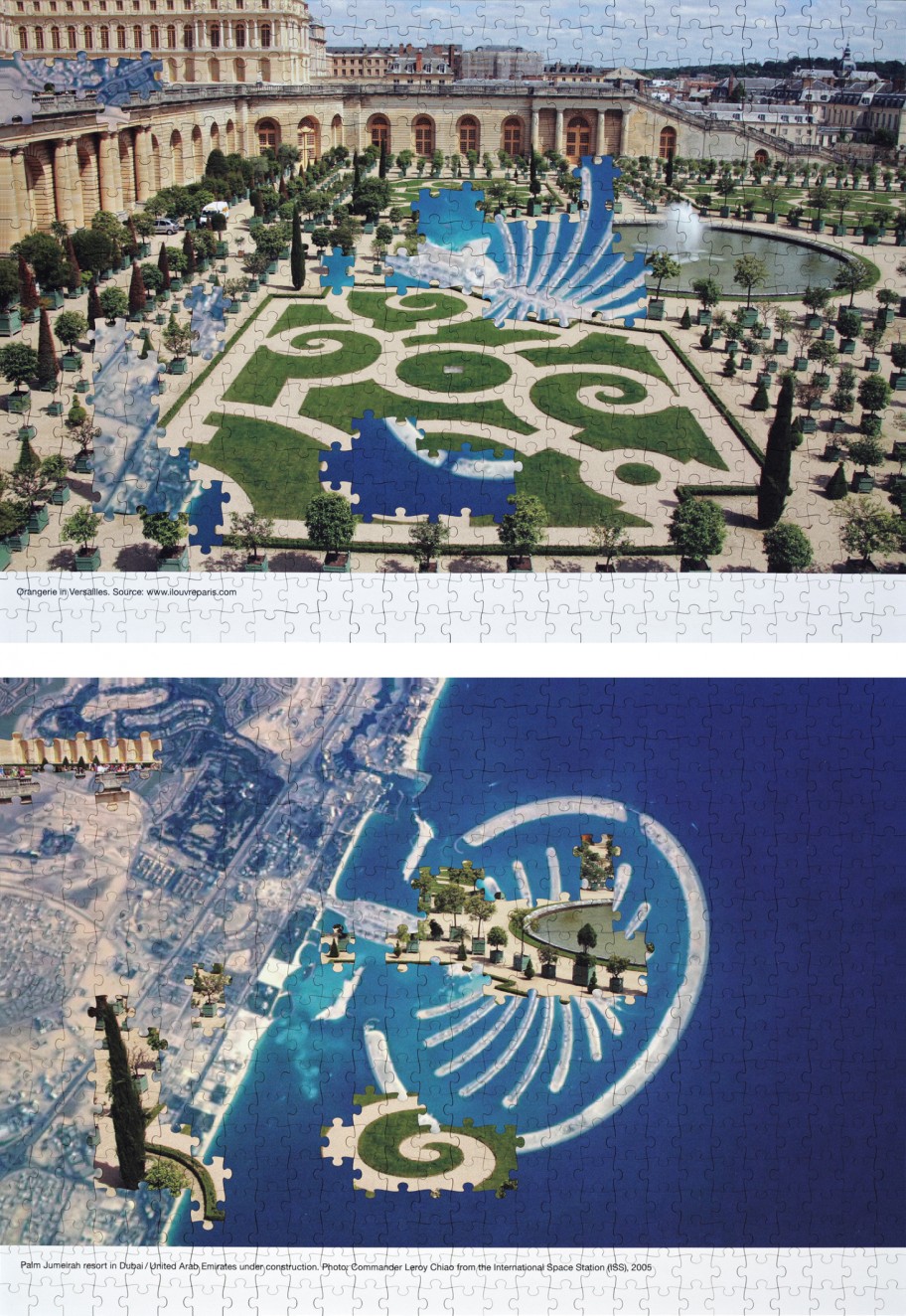 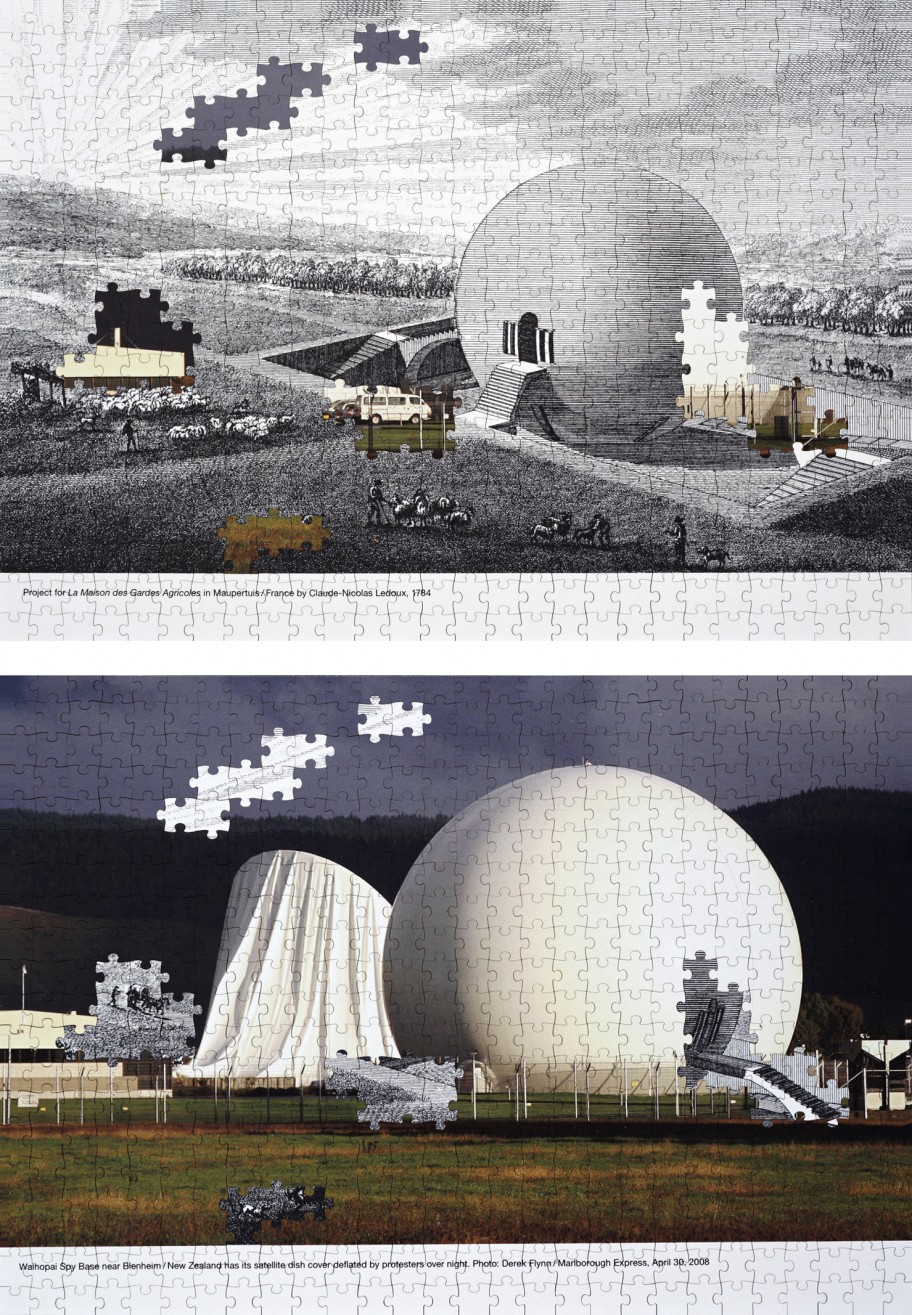 Processes of socio-cultural change through spatial or architectural intervention are a recurring theme in Adrien Tirtiaux’s work. Ramps and slanted surfaces are frequently used as means of implementing these transformations. This sets his work alongside early-modernist avant-garde movements: “In modern and early-modern times, such ramps and slopes more than once served as spatial vehicles to ‘lift’ the viewer out of society and into the revolutionary project. From the revolving staircase in Tatlin’s Monument to the Third International (1919–20) to the elevated planes and platforms of Mies situated over and above the city, ramps, stairs, and lifts have functioned as the basic spatial tools for a modern and ‘elevatory’ revolution. In Tirtiaux’s case, however, no revolution is at stake. His ramps and ascensions do not issue an image of a social ideal or ideal society but focus on the idea and the operation of upturning itself.”1.
The Revolution Tower (2014), a system of modular elements of increasing size, is also one such means of self-transformation within society: a vehicle for instigating grassroots transformation, societal changes that develop from the bottom up.
By tilting and stacking the modules, a tower is erected that can theoretically extend indefinitely upward. The scale of the individual modules remains humanly manageable and the tilt-system of construction eliminates the need for a crane; only an increasing number of people is required to lend a hand. In conjunction with Hotel Charleroi: La Force Du Changement (2014 in Charleroi, Belgium) participants collectively built a 6.30-meter-high tower using three such modules. During the event, which lasted several days, the largest module served as a temporary architectural structure and was used, among other things, as a roofed bar.

The exhibition SECTOR 17 at the Galerie Martin Janda brings together artistic positions that examine the interrelationships of architecture as a field of research and as a point of reference.

Werner Feiersinger has been studying specific modernist buildings, especially Le Corbusier’s architecture for quite some time. Not only does this interest involve meticulous research but it is also characterized by an unceremonious dealing with the subject matter, a departure from these icons of modernism, and a breaking free from the canonical modes of perception and representation.
In both his sculptural work and his photographs what he is concerned with are “zones of transition between subjective gaze and analytic observation, between autonomous object and functional utility, between architecture, design, and art (…)”2.
After visiting many of Le Corbusier’s buildings in Europe, Werner Feiersinger traveled to Chandigarh in 2013. The capital of the Indian state of Punjab was built in the 1950s by a team of international and Indian architects according to a master plan by Le Corbusier and Pierre Jeanneret and is considered an icon of modern urban design. In Feiersinger’s photographs, however, the main perspective is not a documentary one but the view of the subject from the specific angle of his own sculptural and artistic practice: it seeks the expressive, sculptural qualities of the buildings, volumes, forms, structures, materials, surfaces, and their interrelationships.
The focus on often overlooked details, objects and their relations, as well as on everyday items also plays an important role in Feiersinger’s sculptures. A ladder object, a three-dimensional piece made of thick pipes, lies in the first room of the gallery pretending to serve a purpose but never following through. The sculpture is primed in beige and sanded as if in preparation for a final coat of paint, which is never applied. The sanding reveals glimpses of the underlying stainless steel. “I take back the perfection of production, the objects appear brittle and ambiguous. It is this ambiguity that interests me. At the same time, the sculptures should be like concentrates.” (Feiersinger)

Material, surface, placement, and form are important themes in Andreas Fogarasi’s work as well: Mirror Ring (2012), a cylinder with a reflective surface, is tethered in the second room of the gallery using thin steel cables. This spectacular gesture refers to modernist utopias (hovering / flying / weightlessness), but also to post-minimal art (measuring space / relationship to the body). The curved reflective surface generates associations with architecture models, at the same time it reflects the entire surrounding space and directs the attention of the viewer to the interior and exterior.
In two particular wall pieces Fogarasi also attempts to produce a documentary sculpture:
Roof Study 09 (2015), a precisely folded sheet of aluminum with linen bookcloth mounted onto it, calls to mind a dysfunctional model of a roof construction, but also brings up the subject of the common practice of mounting photographs on aluminum sheeting. In contrast to a concrete image, the combination of aluminum and gray linen seems emblematic, like a letter from a flag alphabet.
Two contrasting materials and their features are combined by Study 10 (2015): dark red marble and light brown canvas create a hybrid object. “The marble stands for everything we associate with it – value, permanence, (financial) power, beauty, façade / cover. It is about the documentary content of materiality, but the object is also reminiscent of a pair of material samples, like in home improvement stores or architectural firms where surfaces are displayed for comparison.” (Fogarasi)

Anna Artaker‘s and Meike S. Gleim‘s joint project ATLAS OF ARCADIA presents fragments of a social history in pictures. Using image montages urban and technological develpments in the 20th century are analysed in their social dimension. The images themselves act as independent analytical instruments. The model for this process is the Arcades Project [Passagen-Werk] (1919 – 1940) by the philosopher Walter Benjamin (1892–1940): the outline of a social history of the 19th century based on the city of
Paris.
In the lower floor of the gallery the work PENDANTS (2012-2014) is on display: image pairs crafted as puzzles connected by the exchange of puzzle pieces.
In the development of the chapter on “Iron Construction” Benjamin focused on his observation that technically innovative iron architecture initially imitated classical forms and so neglected the innovative potential of the material. However, this not only concerns iron as a construction material. Forms, which at the time of their creation promised technological and social progress reappeared once more decades, or even centuries, later in dystopian contexts: the utopian ball architecture of the French architect Claude-Nicolas Ledoux (1736–1806) was realized in the second half of the last century in the form of radar surveillance systems; the baroque garden architecture of Versailles is trumped by the Palm ornament of the Palm Jumeirah Resort in Dubai in its scale over the human dimension. Nevertheless, the artificial island remains trapped in the same ornamental style. The photo montages on the theme of recurring types uses the puzzle as its basic principle. Image pairs which show similar forms of construction will be arranged as puzzles and connected or contrasted as individual puzzle pieces are exchanged between the images.

[…] Sharon Ya’ari shifts his photography away from the course of the grand, spectacular, artistic/commercial, color “photography after photography,” harking back to distant histories, more attentive to the medium. The aesthetics of classical black-and-white photography that produced sublime landscapes is employed here, in ist inarticulate, weakened, “mutilated” version, as a tool for the extraction of beauty from the minor loci and objects in which the Tel Aviv Bauhaus is revealed and to which it has deteriorated.
The photographer lives in central Tel Aviv: home, family, child. Albeit unseen in the photographs, they form the center of the circle, the axis around which the photographic act transpires—within a 500-meter radius from home. The photographs are multiple, and may multiply further. Ya’ari photographs derelict yards with neglected vegetation, discarded materials and objects, hidden corners, paths between houses, and “Bauhaus” traces: it is the architectural label, ascribed as a culturalconceptual skeleton to the houses’ rundown appearance, whose pathos the photographs dismantle. The façades and the pavements leading up to the houses likewise appear peripheral, postern, and are photographed looking downward. The architecture, the inanimate objects and the flora are fused by the photograph into one unit, a sculptural configuration, a kind of assemblage that also functions as a “micro-archaeology”: fascination with the way in which things are cumulated and heaped in the city, like the strata of an archaeological site. […]3