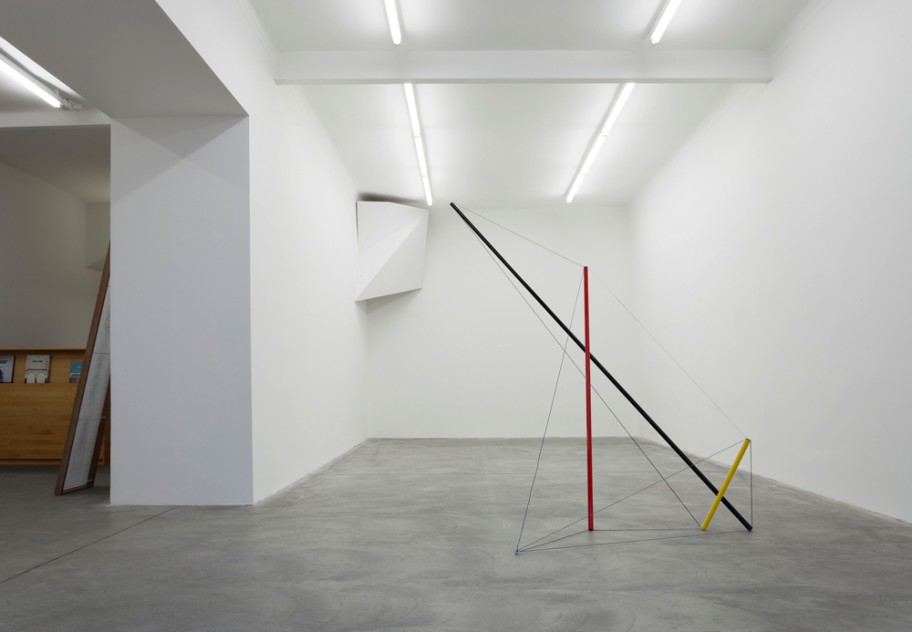 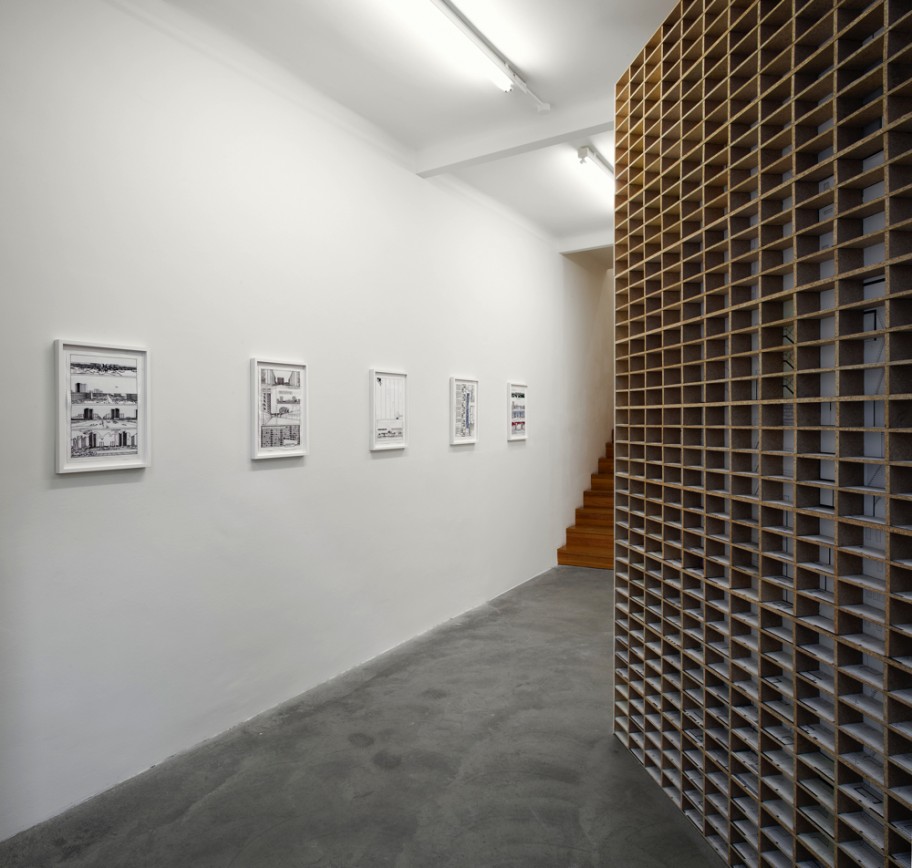 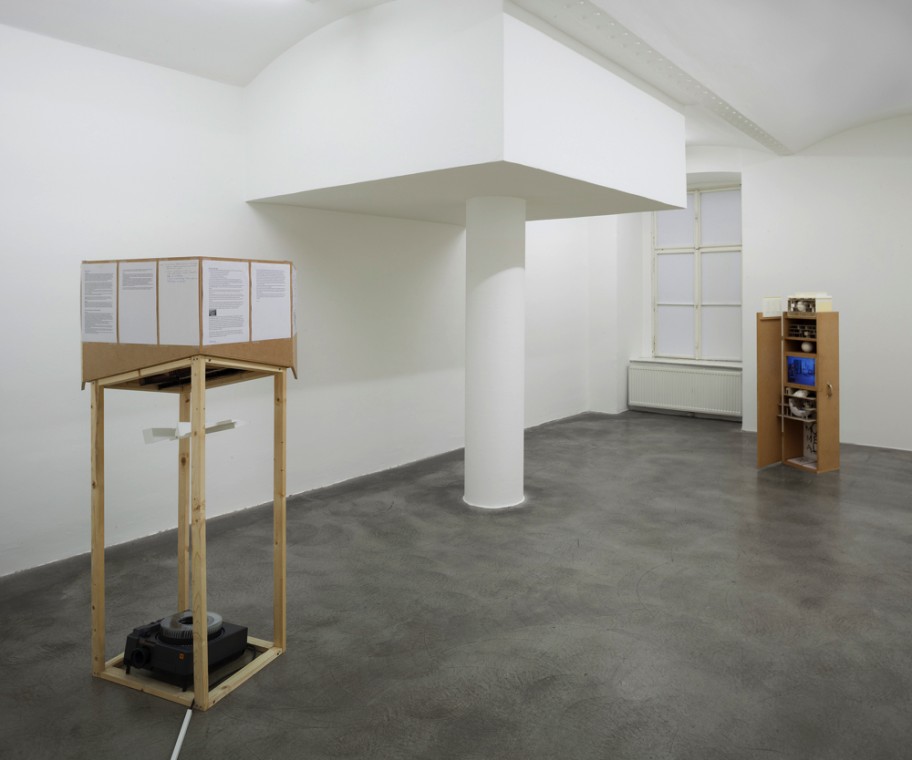 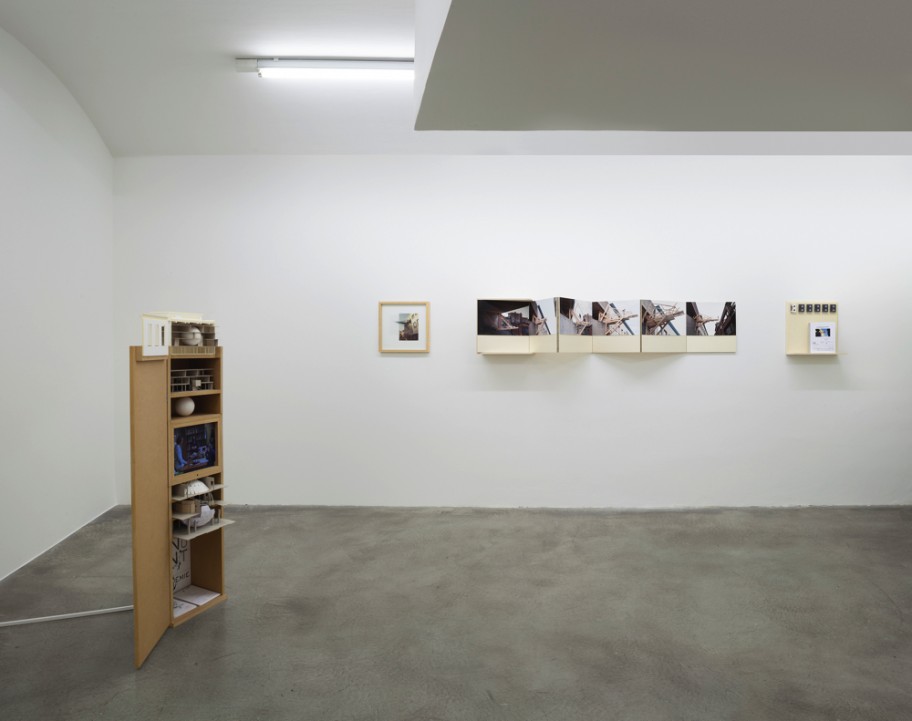 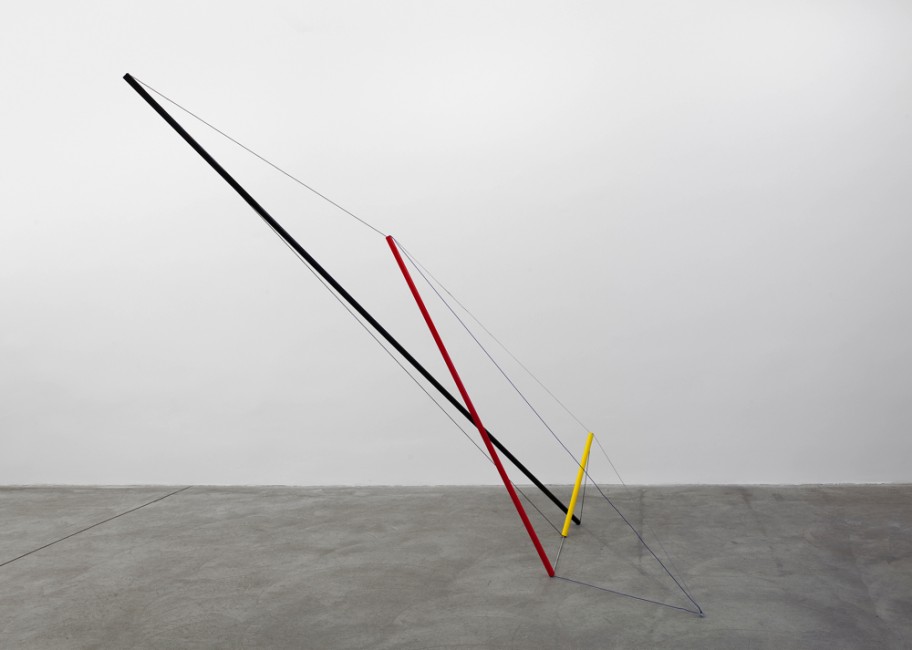 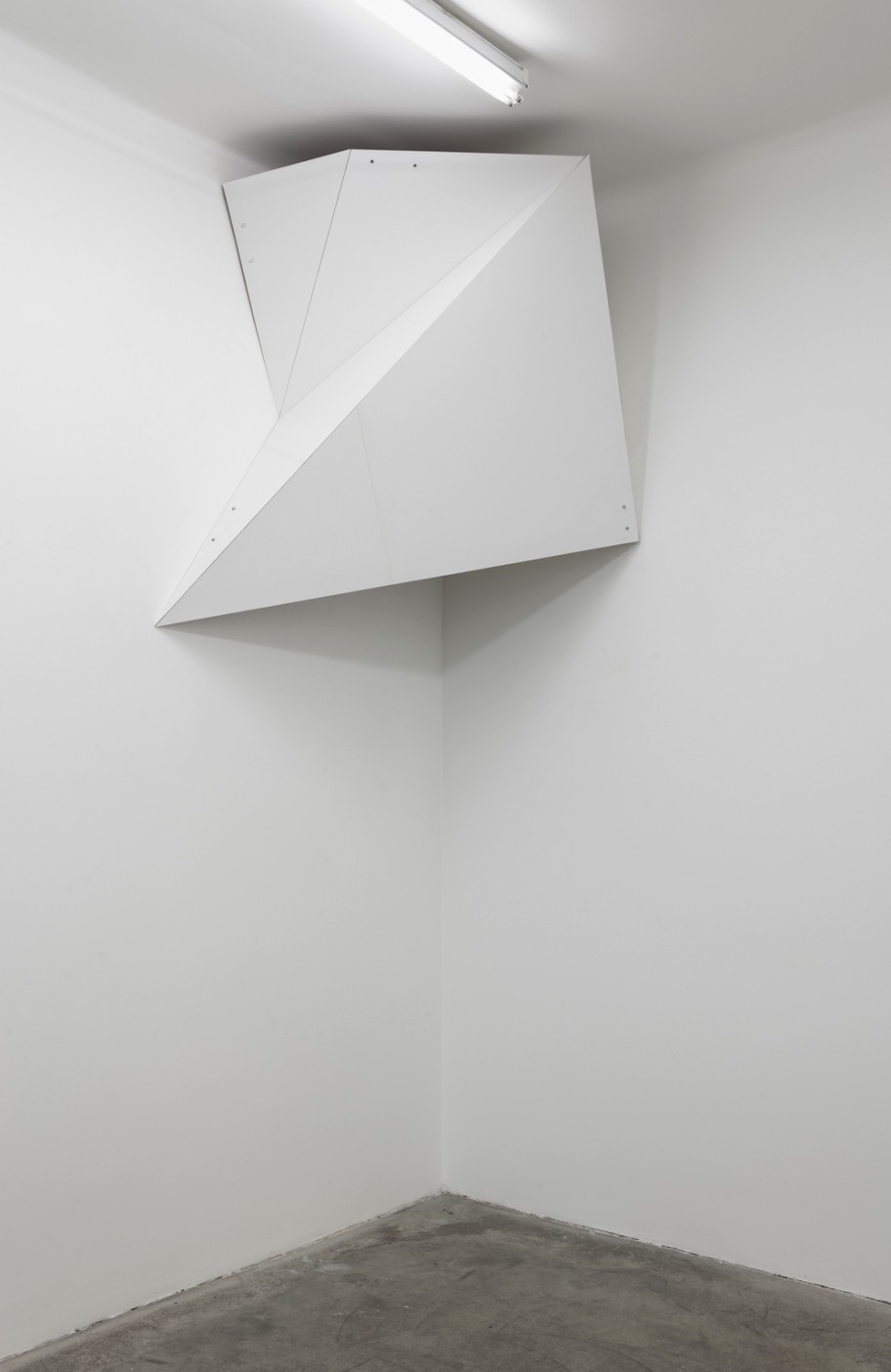 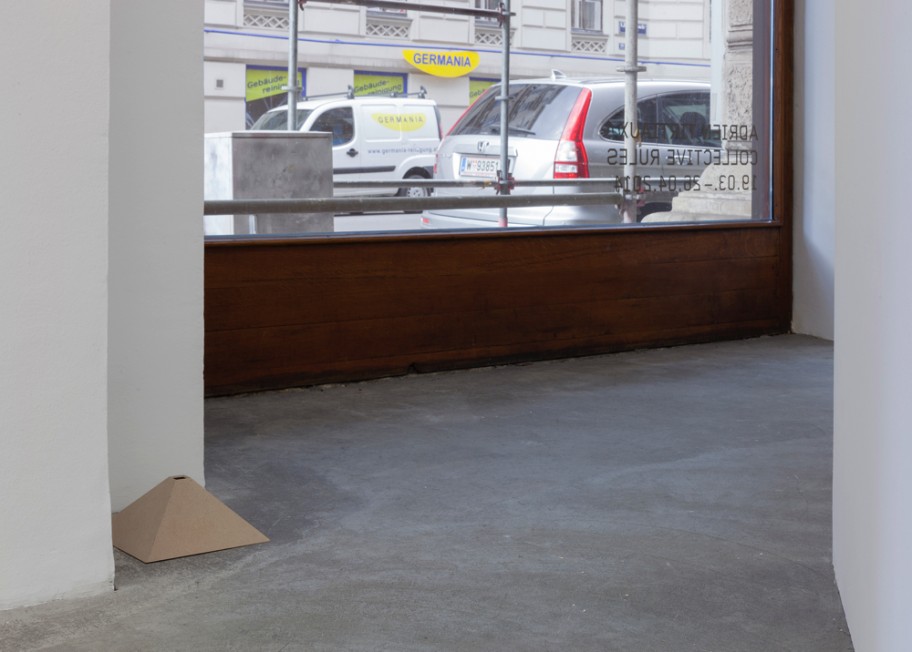 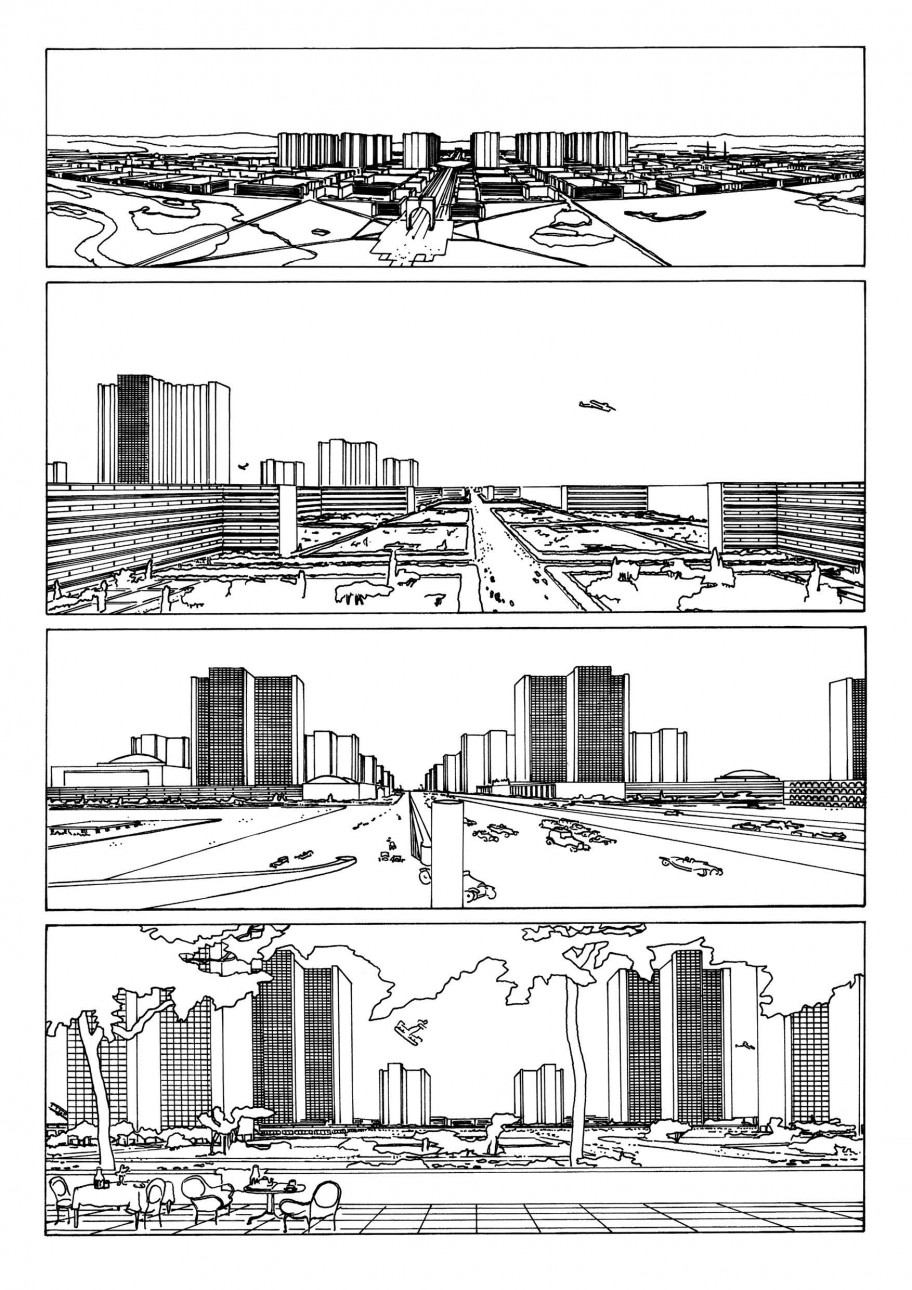 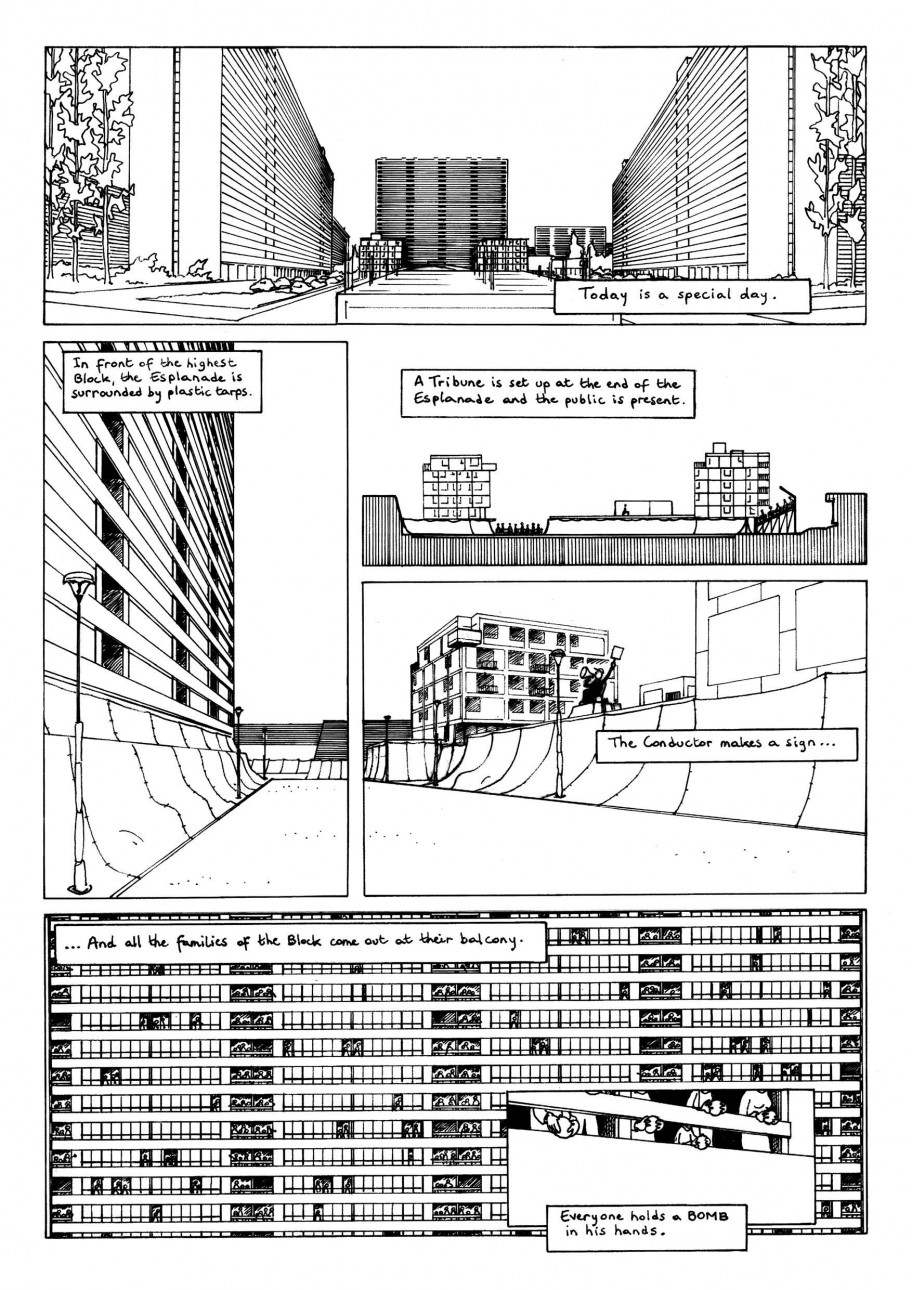 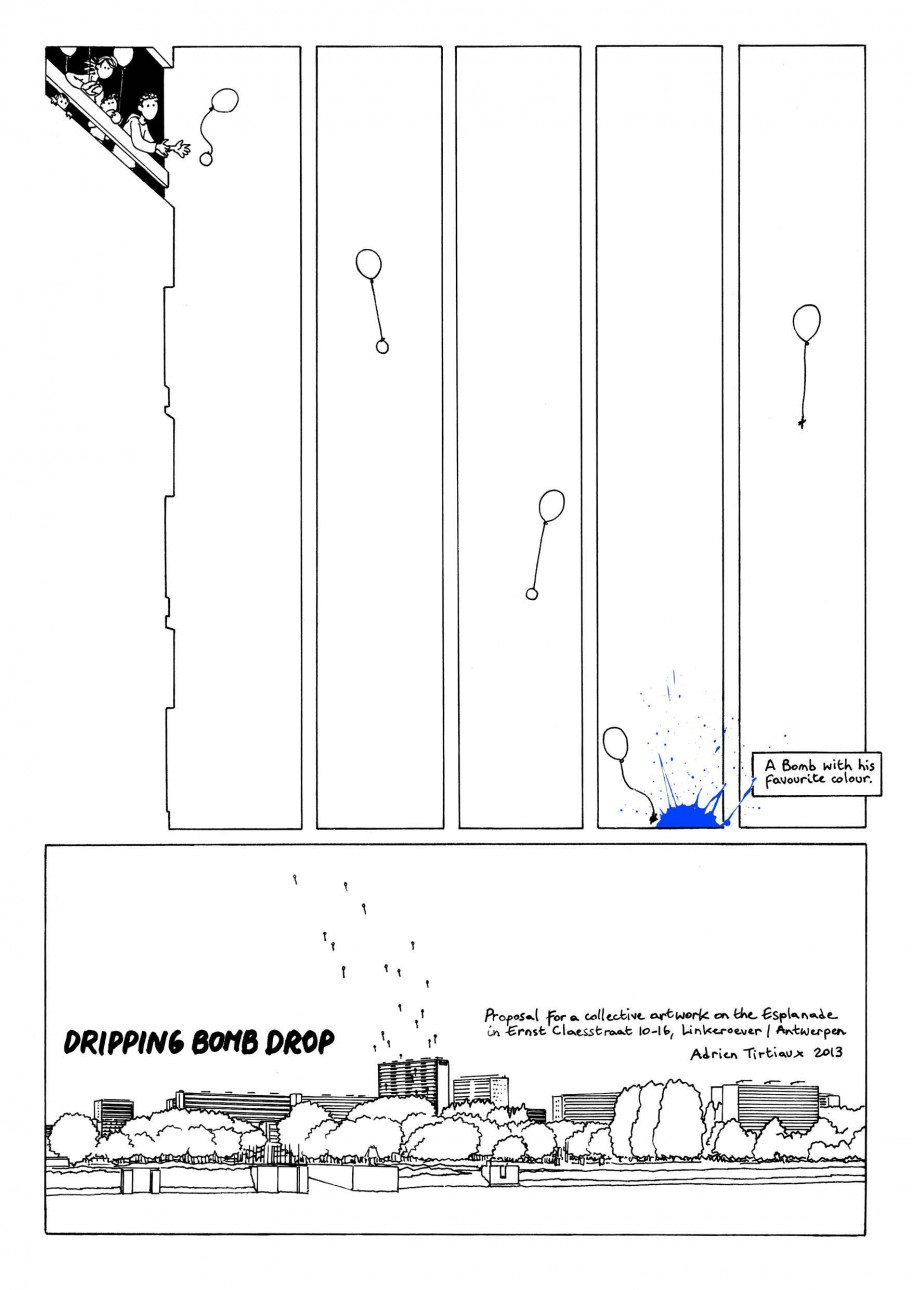 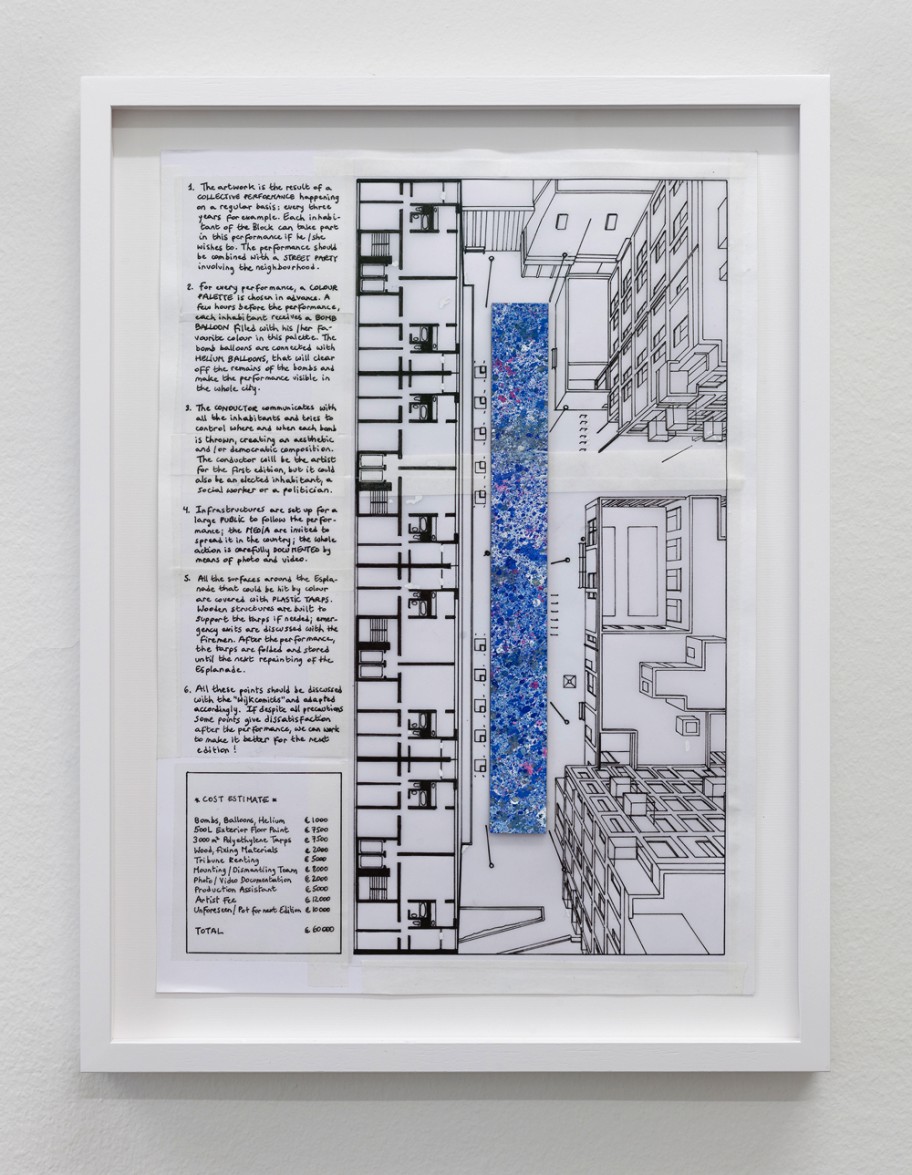 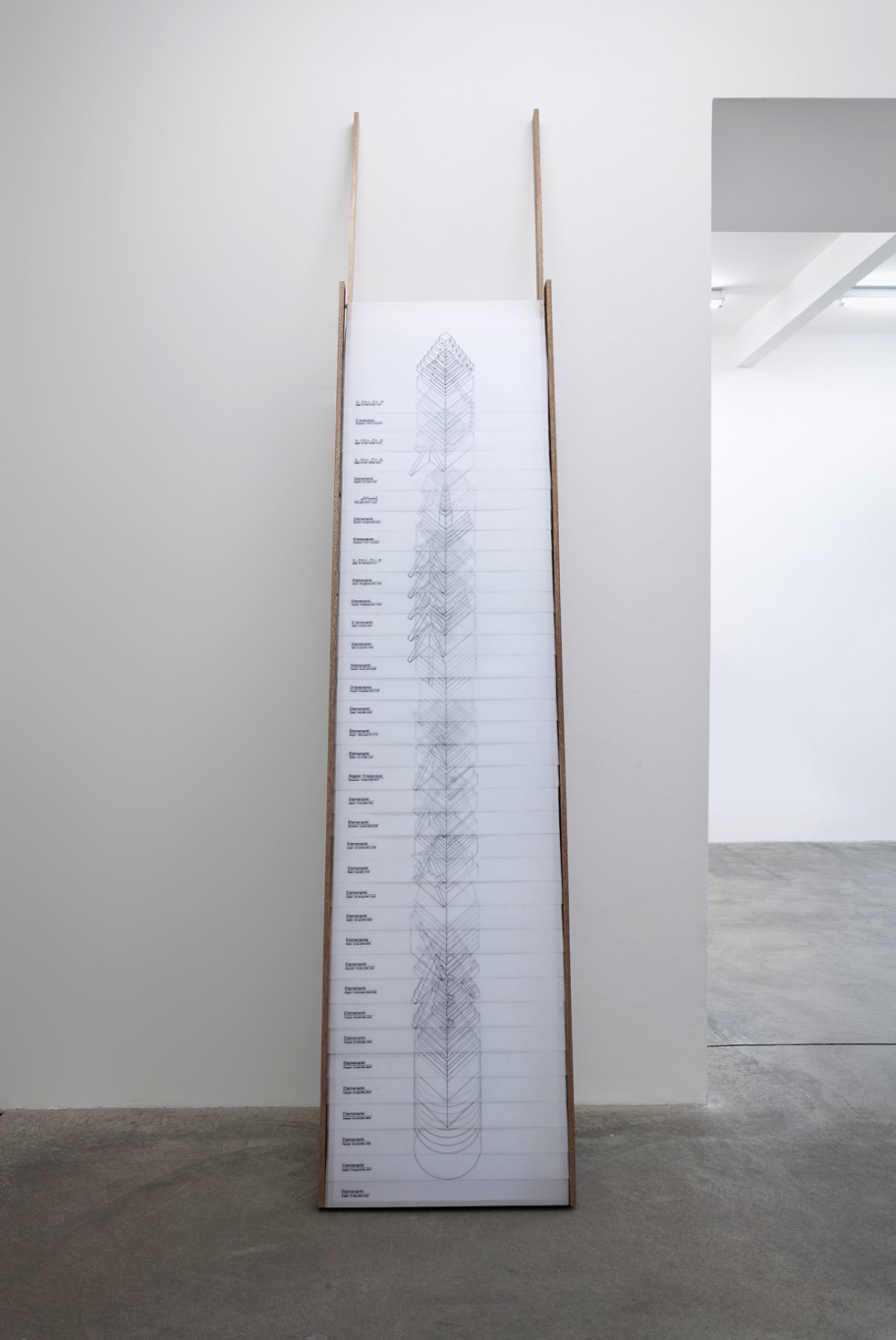 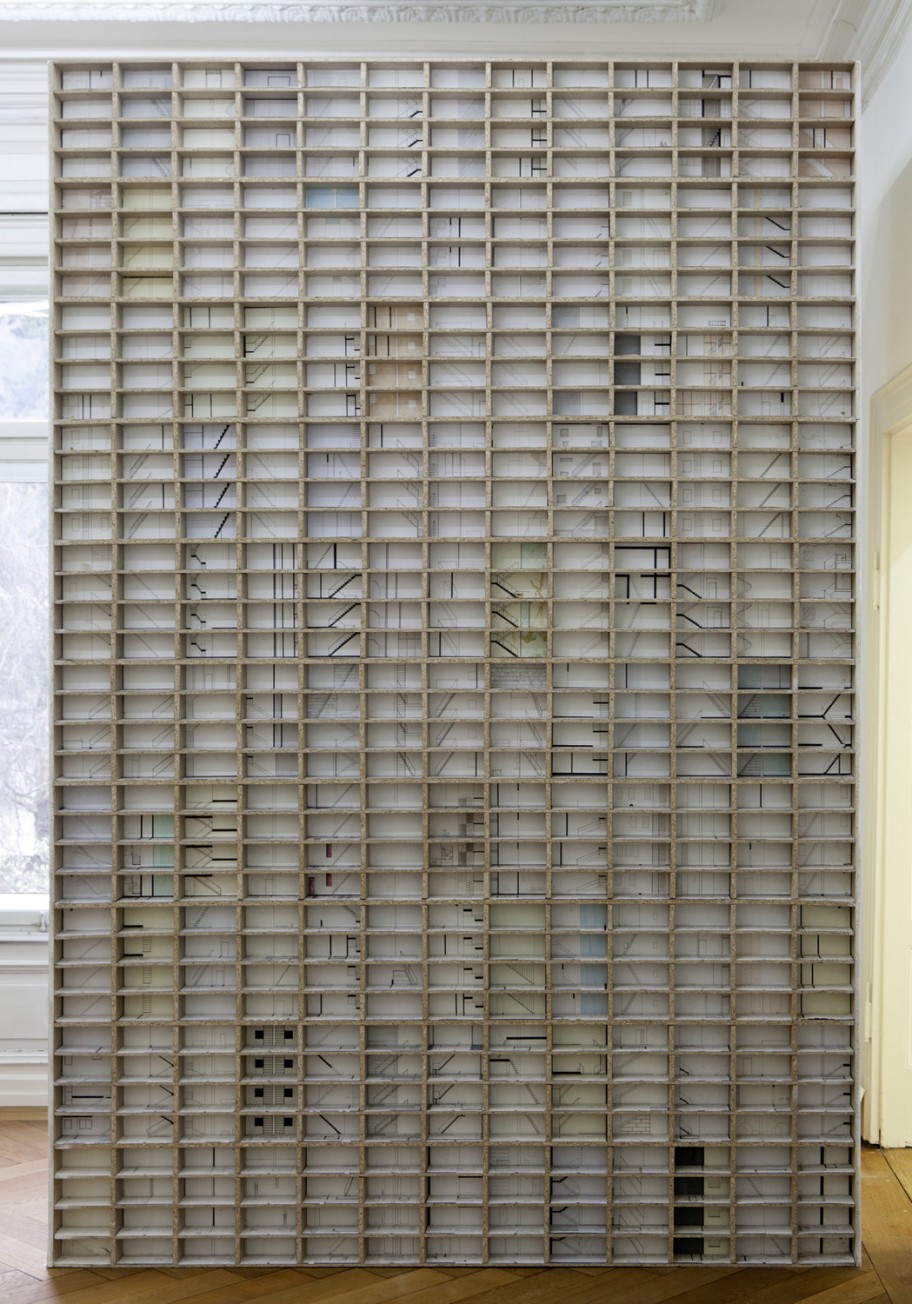 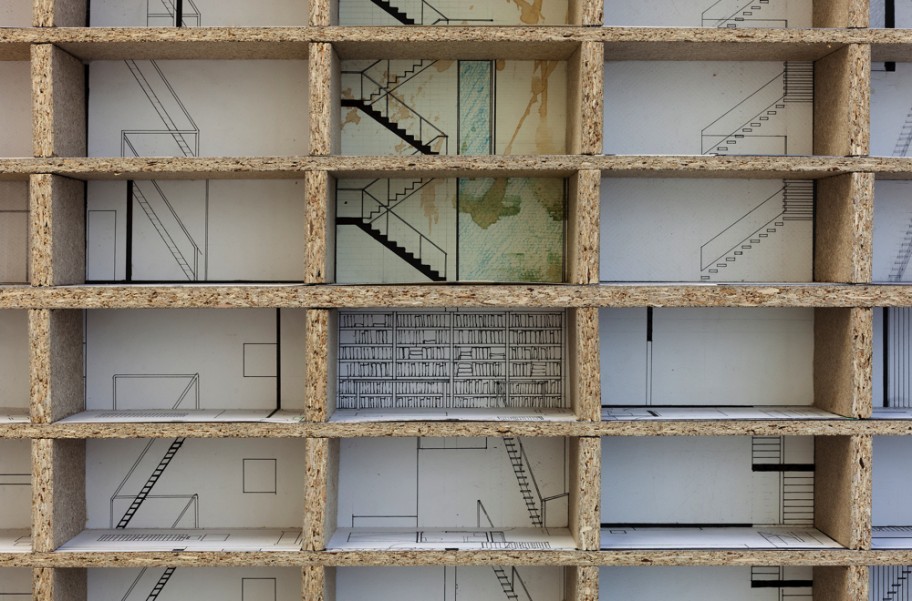 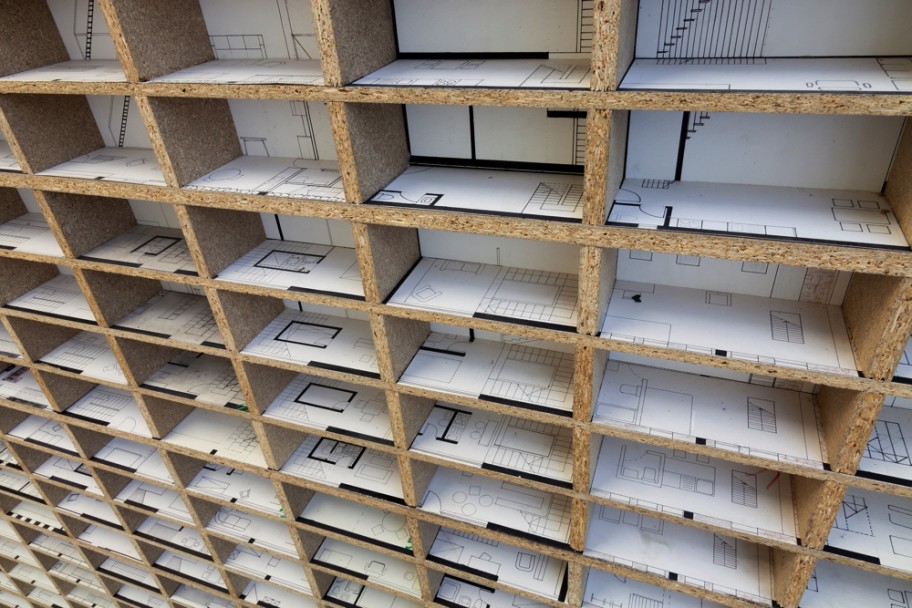 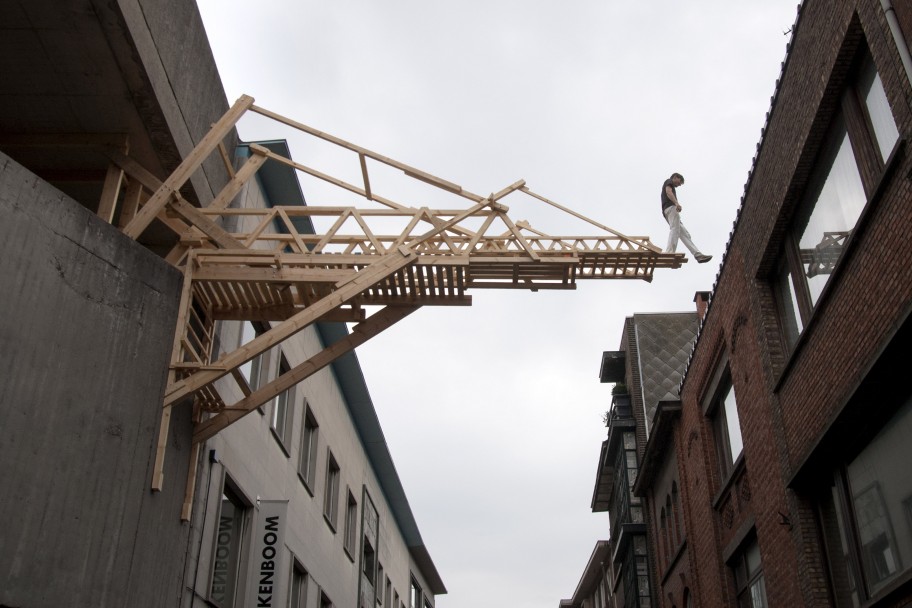 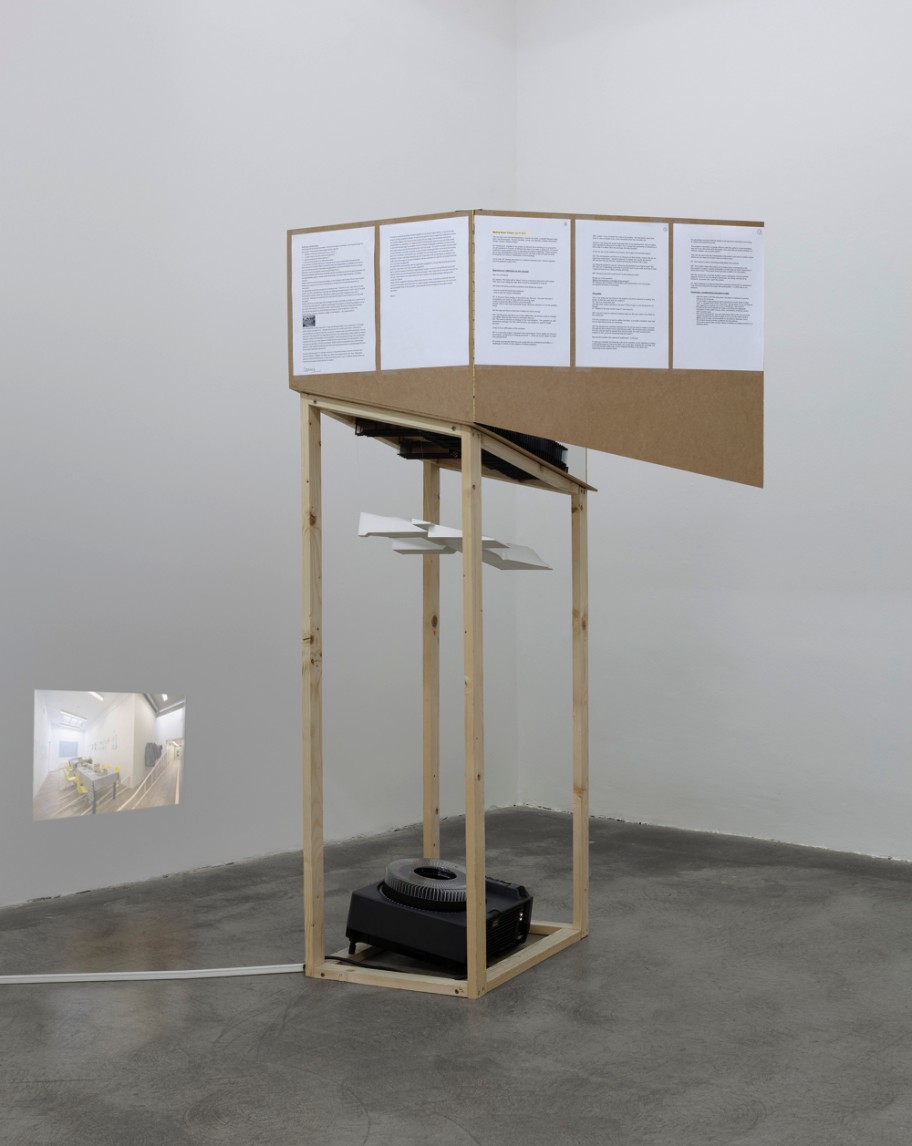 After the publication of Things Design Themselves (2013) and Space is Time (2014) Adrien Tirtiaux gives an insight into the topic of the third planned volume of his publication series, Collective Rules, in which the artist’s examination of self-determined processes and spatial narrative is expanded by social models.

For the gallery’s entrance floor Adrien Tirtiaux has designed sculptures and drawings the constructive systems of which are following existing or utopian sociopolitical structures. In the basement three project boxes containing models, drawings, slides and other materials visualize monumental projects the artist has developed in cooperation with or for collectives. In the performative intervention The Great Cut (2012) Tirtiaux built a wooden structure into the Stroom center for art in Den Haag, which eventually occupied 21% of the building’s space in an effort to visualize a massive cut of cultural funding. The resulting parallels between bureaucratic measures and physical constructs open up new ways of understanding these mechanisms when Tirtiaux translates complex relationships into sculptural solutions.

Adrien Tirtiaux was born in Brussels in 1980. He lives in Antwerpen.

Gleichgewichtskonstruktion (Das Land mit sechs Parlamenten), 2014
Steel tubes, lacquer, steel cables, spray paint
A tension system visualizing the political structure of Belgium. Each of the country’s parliaments (regions, language communities and federal) is represented by a different colour and interacts accordingly with the others.

Collective Rules, Individual Claims, 2013–2014
Cardboard, wood, plasterboard, screws
A model for empirical urbanism. The city starts in a corner and can expand infinitely through a set of rules that respond to individual expression – each new pyramid is bigger than the former one –, collective interests – each pyramid keeps a side open for the next one – and power control – the development of the system always allows all screws to be removed.

La tour de Nimrod était faite de mots, 2013–2014
Marker on polyester tracing paper, wood, metal
A series of drawings following the history of a Wikipedia article. Quote from the English webpage, last modified on October 11 2013 at 01:08: Etemenanki (Sumerian É.TEMEN.AN.KI: "temple of the foundation of heaven and earth") was the name of a ziggurat dedicated to Marduk in the city of Babylon of the 6th century BCE Neo-Babylonian dynasty. Originally seven stories in height, little remains of it now except ruins.

A House for 1820 Writers, 2009
Wood, paint, drawings by Romanian architecture students
An assemblage of student exams found in the garbage of the Bucharest architecture school, responding to the following instructions: to design a house for a writer in a four-storey volume of given dimensions. The projects that had been awarded the best marks are placed at the top of the building, which’s dimensions mimic a pillar of Pavilion Unicredit, the exhibition space where the work was first shown.

Dripping Bomb Drop, 2013–2014
Felt tip pen, paint on paper and tracing paper, C-print; 5 parts
A submission for a public art project on the esplanade at the foot of Antwerp’s highest apartment block. The project won the competition and will be realized, though with modifications, in June 2014.

Bruggen Bouwen, 2013
Intervention for the festival Coup de Ville, Sint-Niklaas (BE), September 2013
Project box: collage, 6 C-prints mounted on leporello, 6 Mini-DV tapes with recordings of the performance, artist book with engineers’ review (project box realized with the kind support of Tiroler Künstlerschaft)
A performative bridge connecting the art school of Sint-Niklaas, a building in early brutalist style, with a flat roof on the other side of the street. Starting from a classroom, the structure was built step by step according to “intuitive statics”. A team of engineers afterwards calculated its resistance so that it could stay as a sculpture for the duration of the exhibition.

The Great Cut, 2012–2014
Intervention within the show Expanded Performance at Stroom, Den Haag (NL), September–December 2012
Project box: model of Stroom at the scale 1:100 with planned cut, two letters to the staff and their reactions, discussion sheets with drawings of sections of the building, slide show with documentation of the intervention, model at the scale 1:100 of realized cut
A proposal to the 18 employees of Stroom to gradually reduce their working space by 21% – the equivalent of the budget cuts suffered by the arts centre starting from 2013. Weekly meetings took place with the team to discuss how the obstructing structure should progress, trying to find a consensus between practical, ideological and aesthetical wishes. After three months, a wooden wave flowed over and through the entire institution.

MONUMENTALE ACADEMIE, 2012–2013
Intervention at Ecole Régionale des Beaux-Arts TALM, Tours (FR), December 2012
Project box: Models of the project at the scale 1:100 and 1:50, digital slideshow with documentation of the intervention, flyers
A reaction to the forthcoming relocation of the École des Beaux-Arts de Tours and the future transformation of its main building, emptied of its floors, into a prestigious museum dedicated to the monumental painter Olivier Debré. Initially invited to work in the exhibition space of the art school, Tirtiaux proposed to the teachers and students to build a ball with a diameter 10 meters unfolding over three floors. For each of the fragments of the ball, specific solutions were taken according to the function of the occupied spaces.