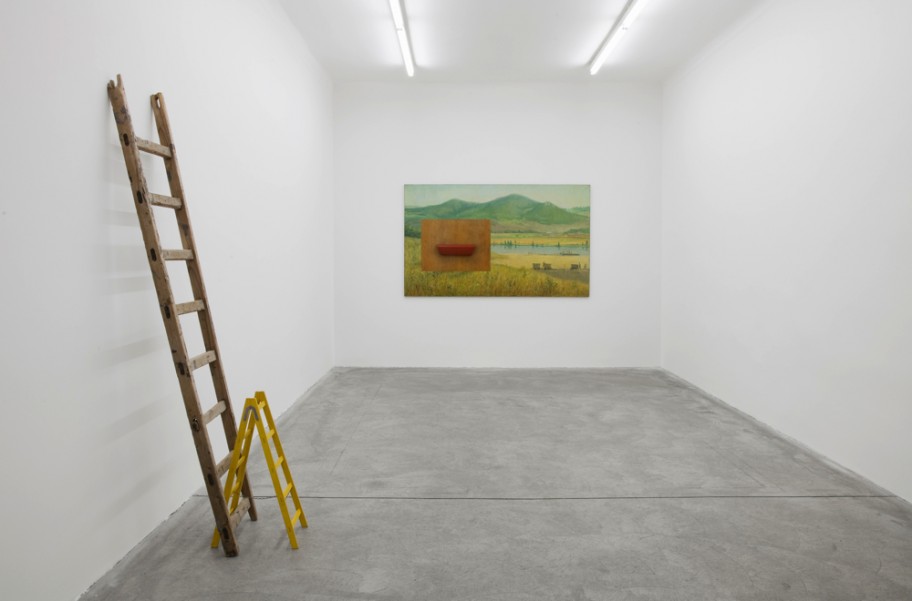 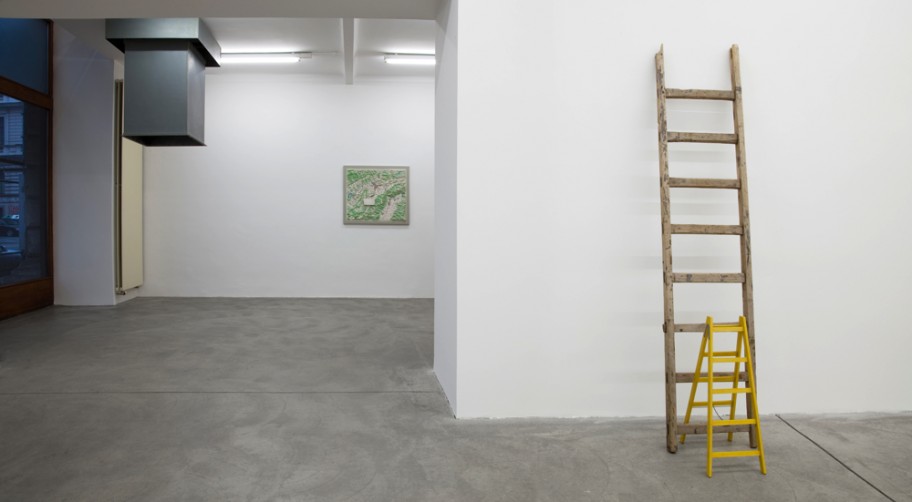 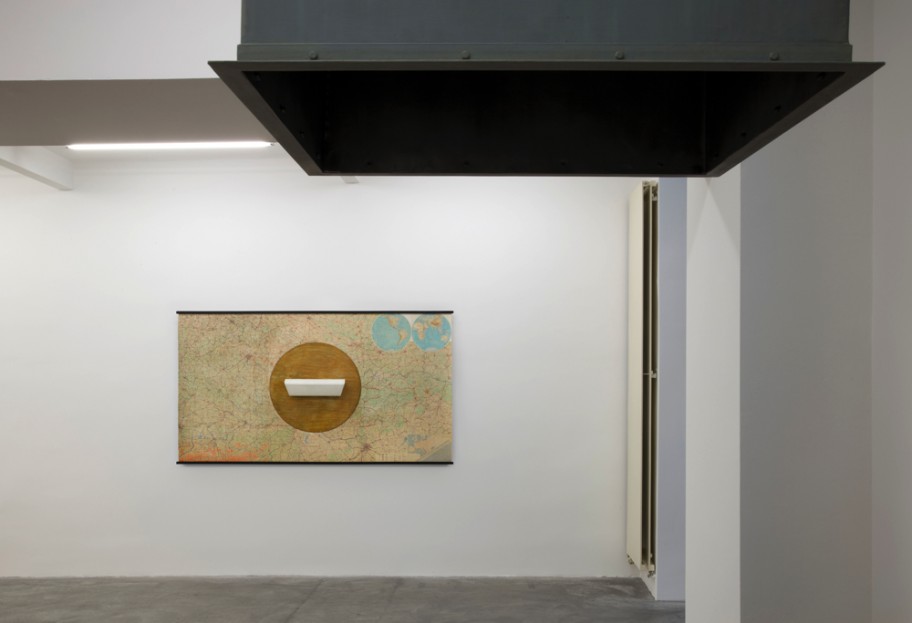 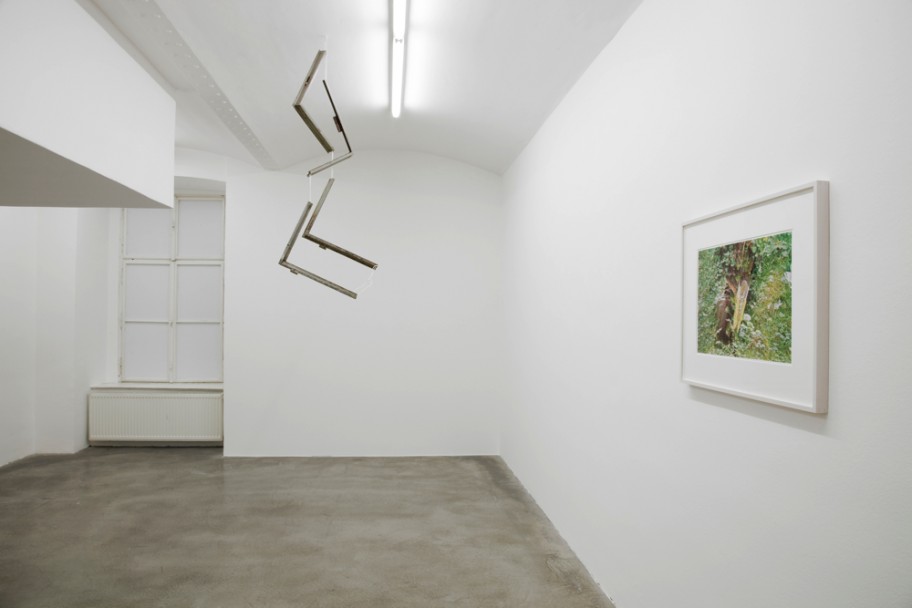 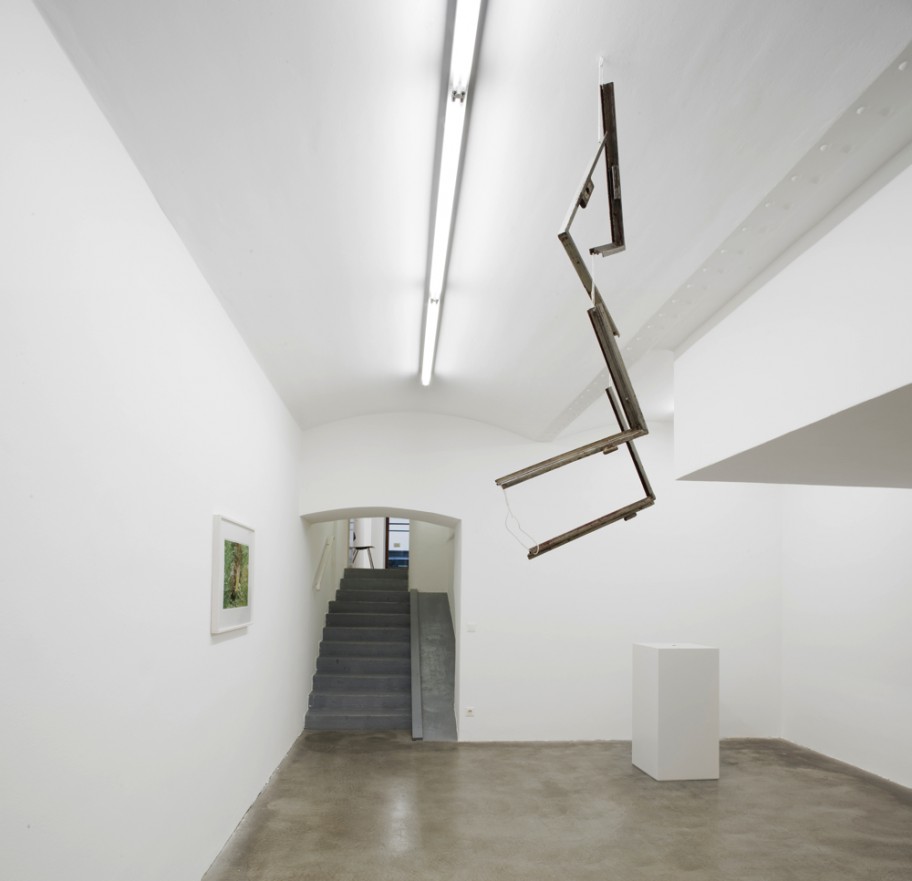 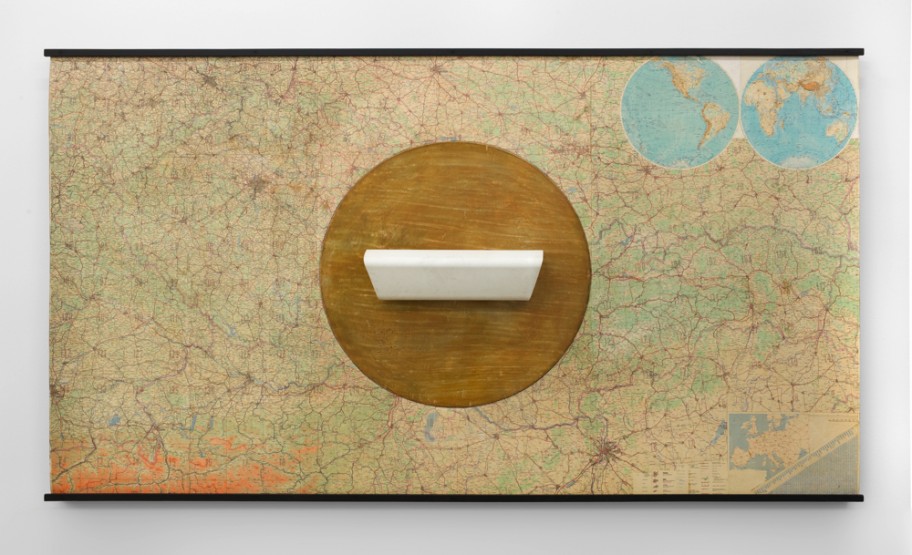 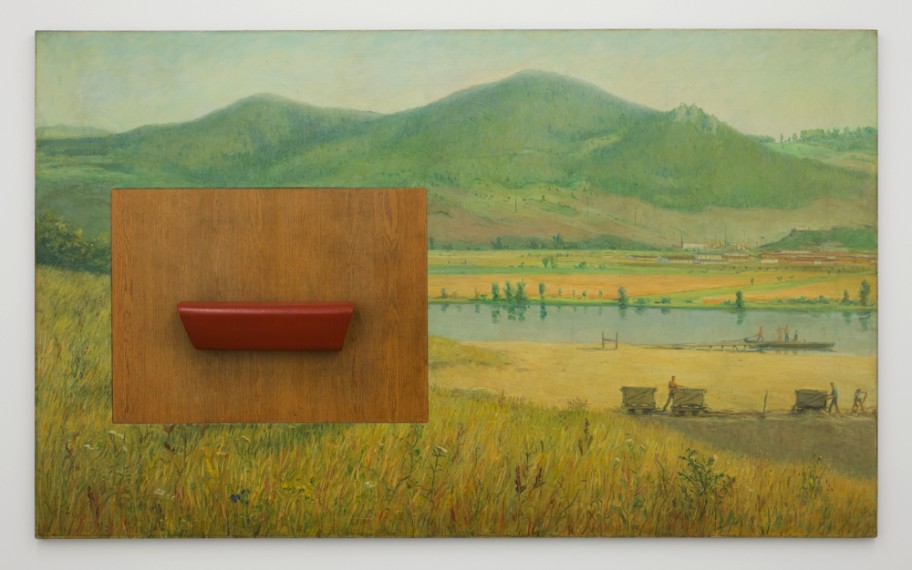 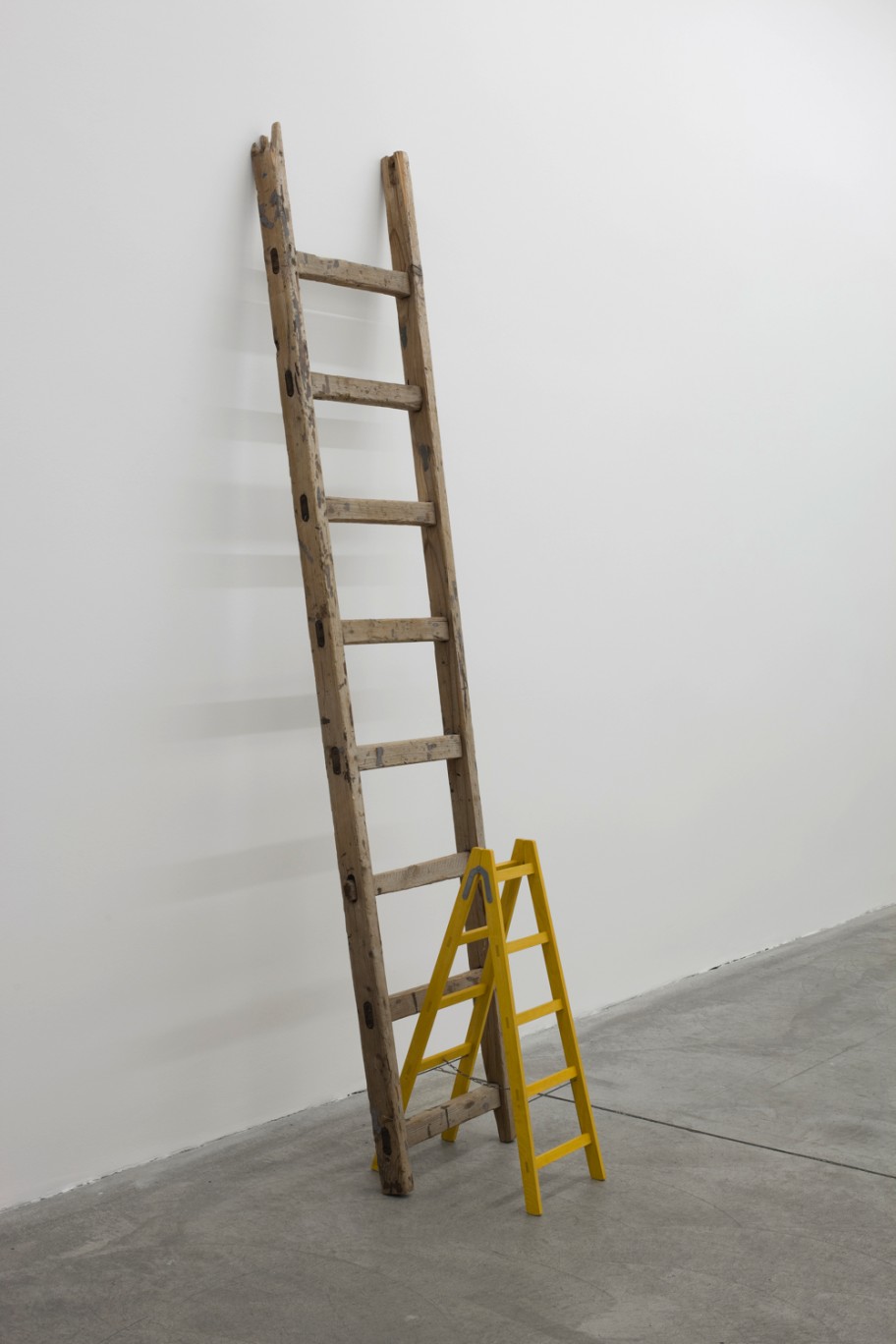 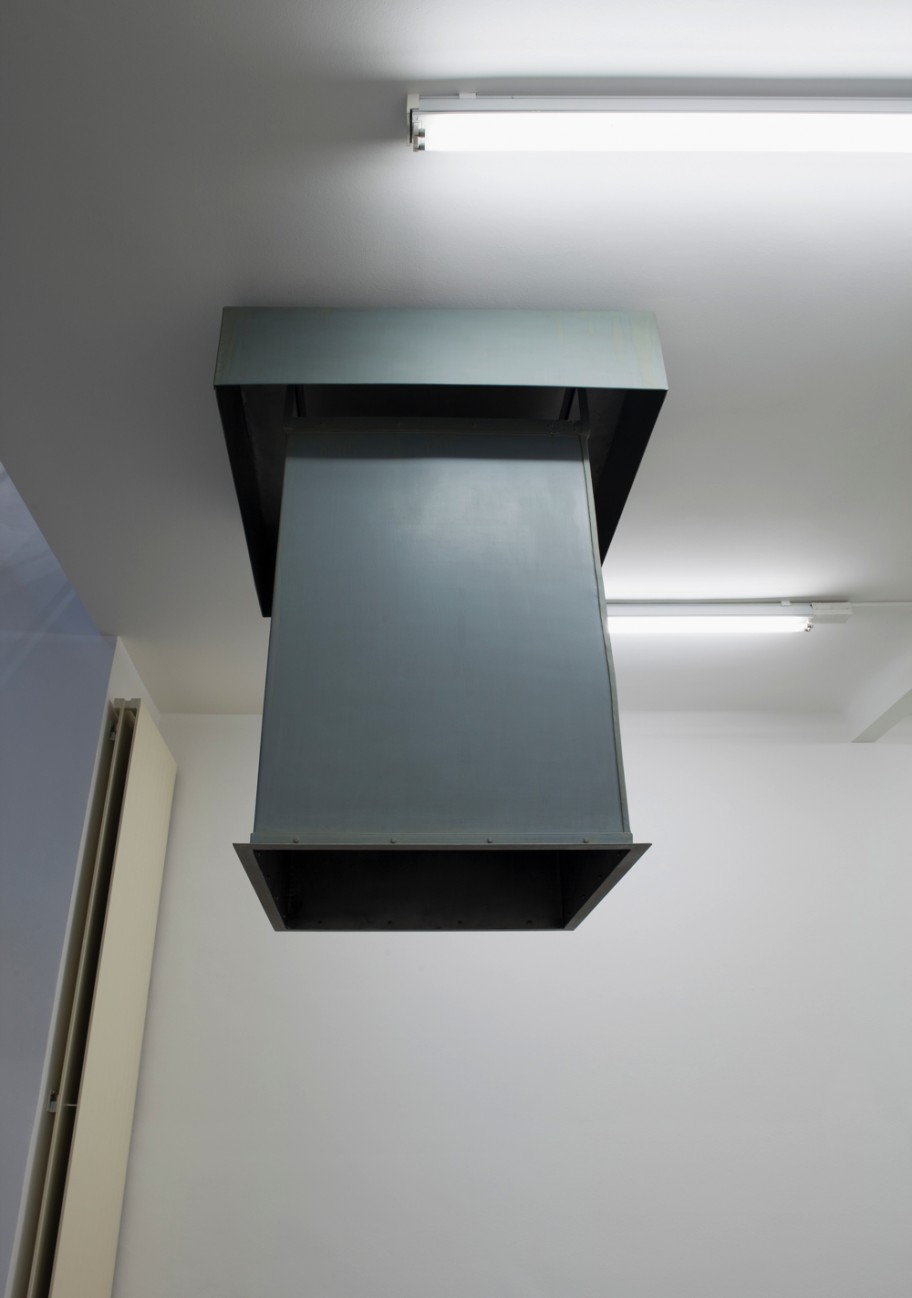 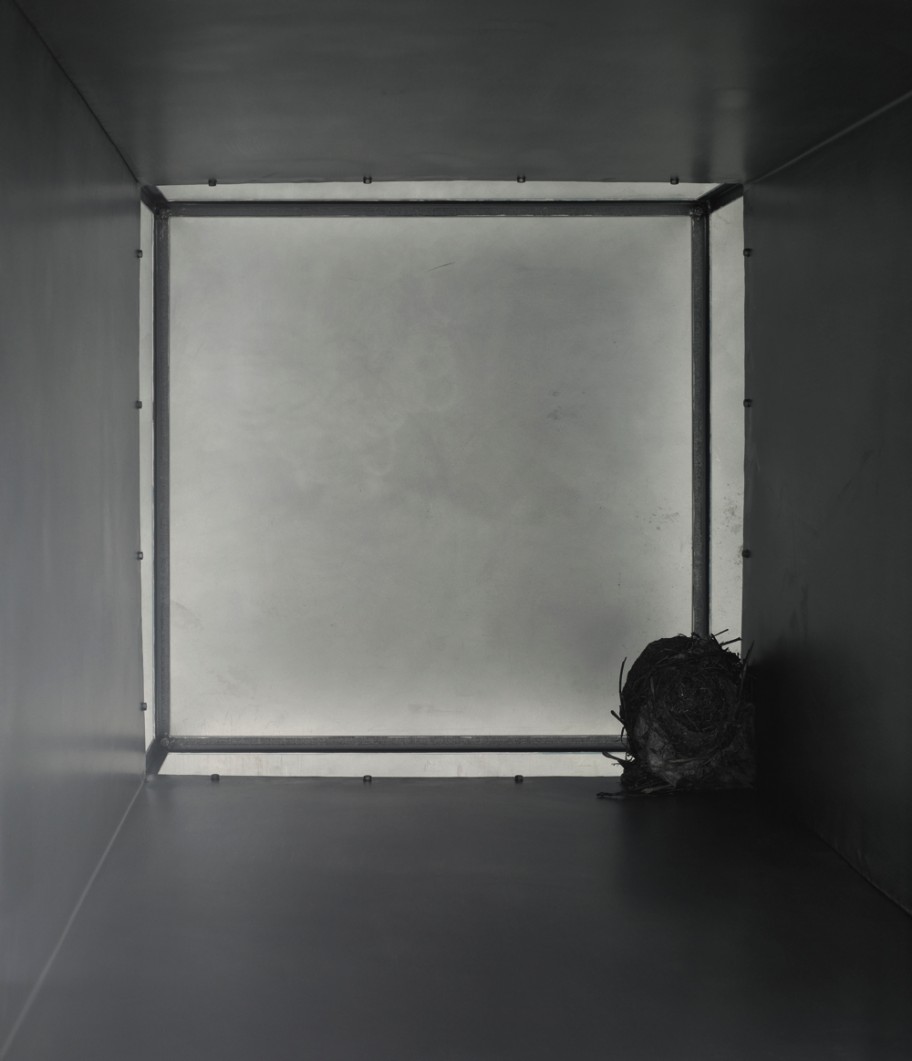 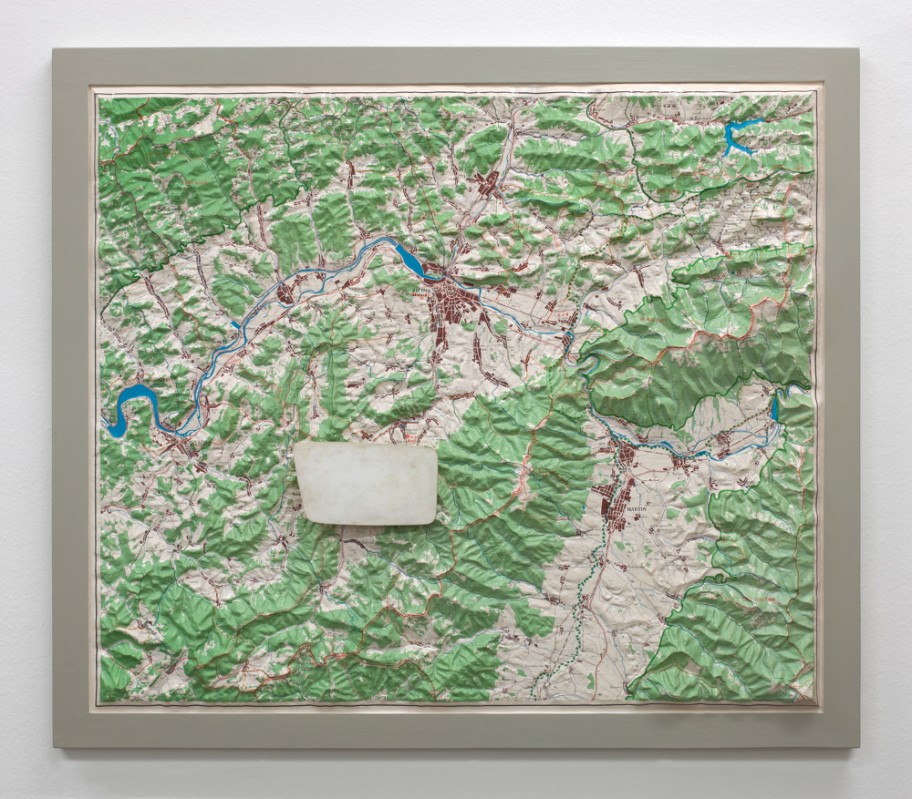 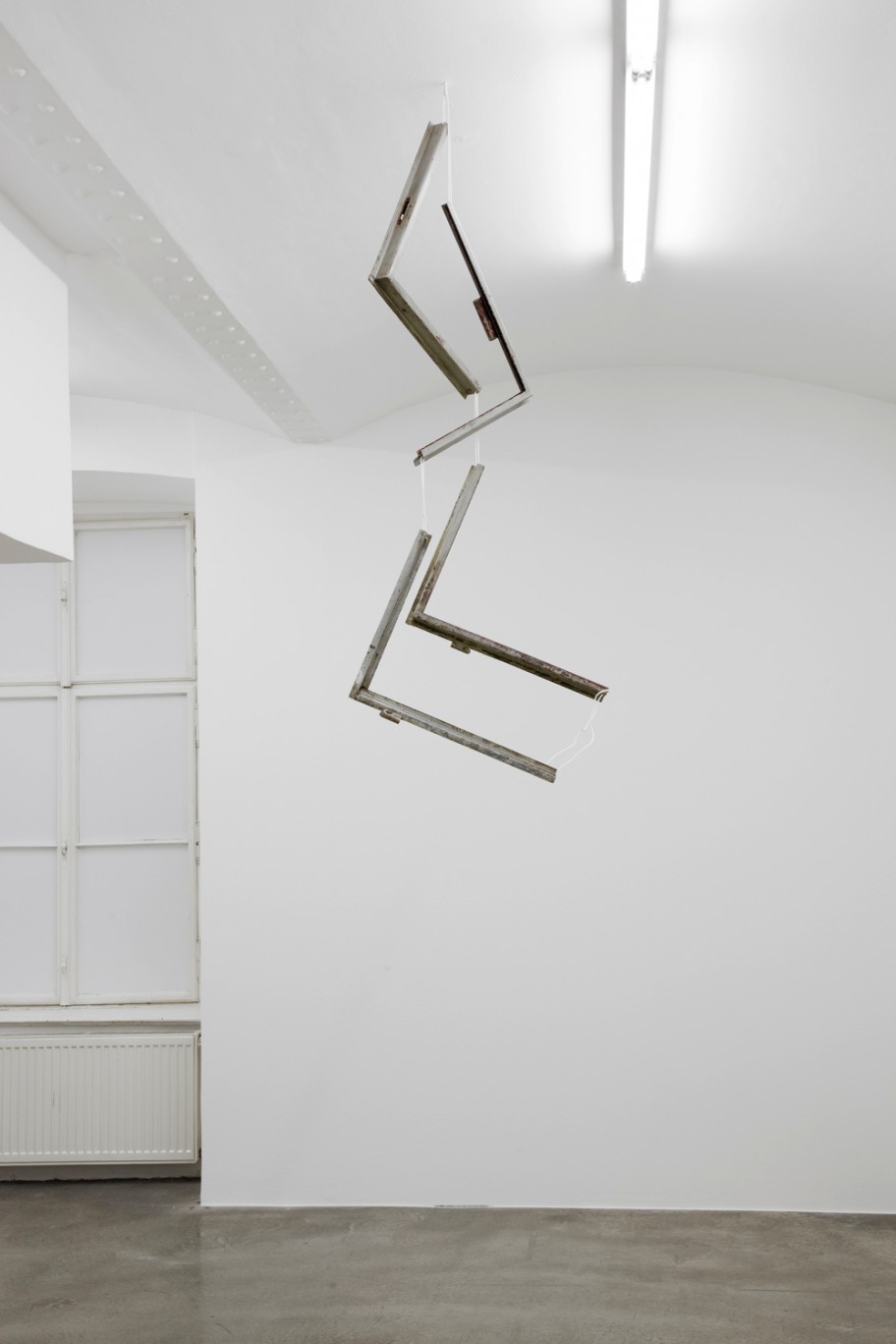 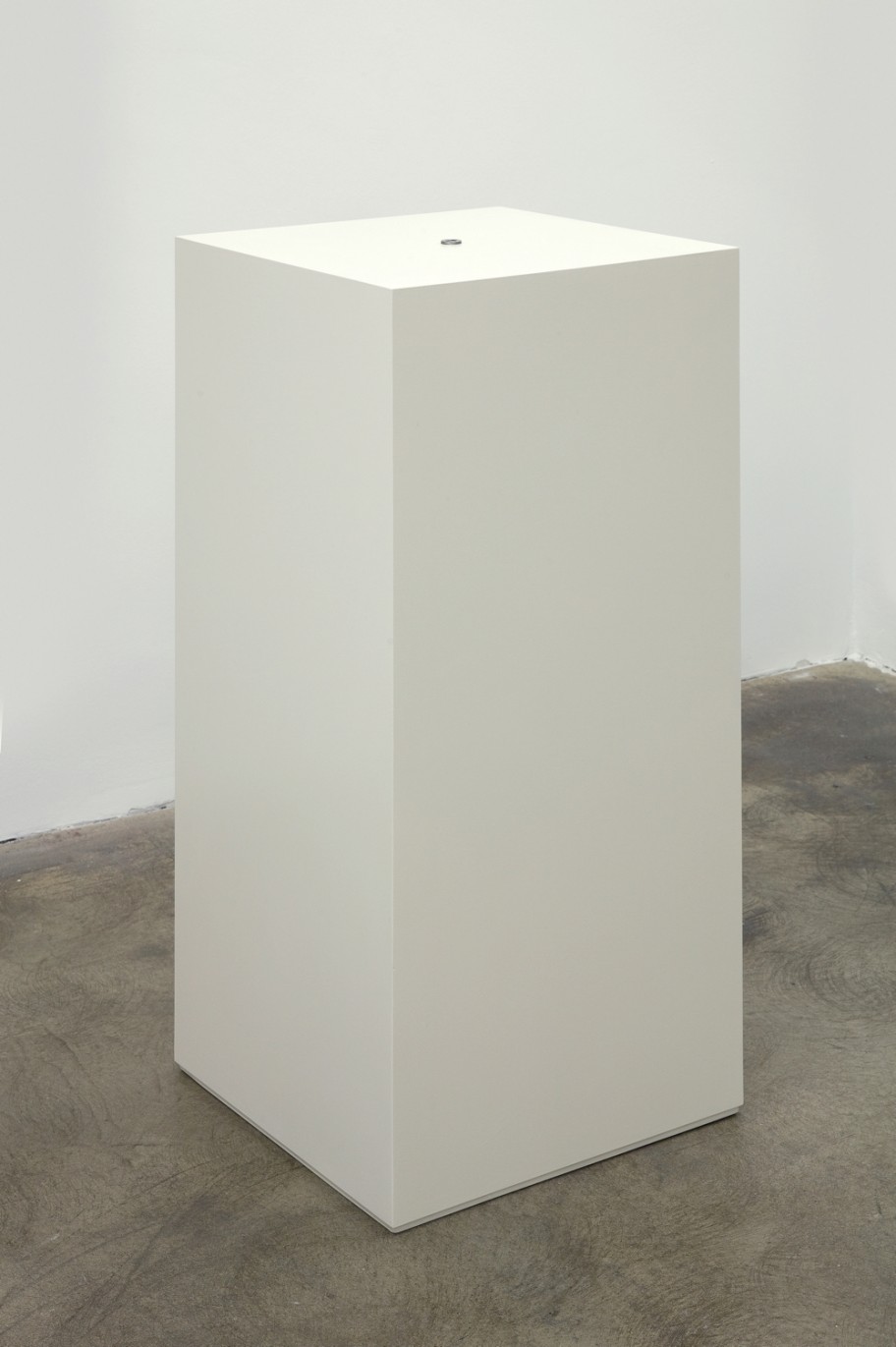 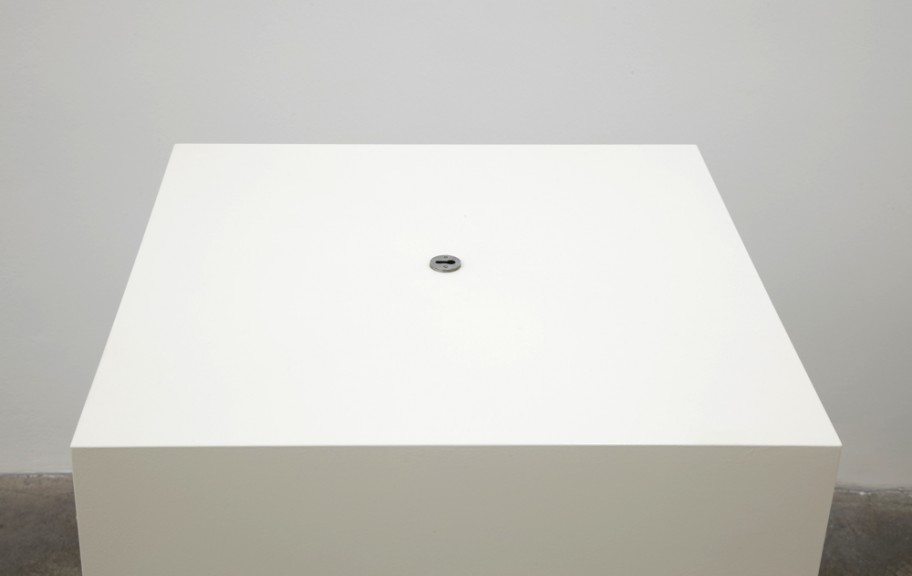 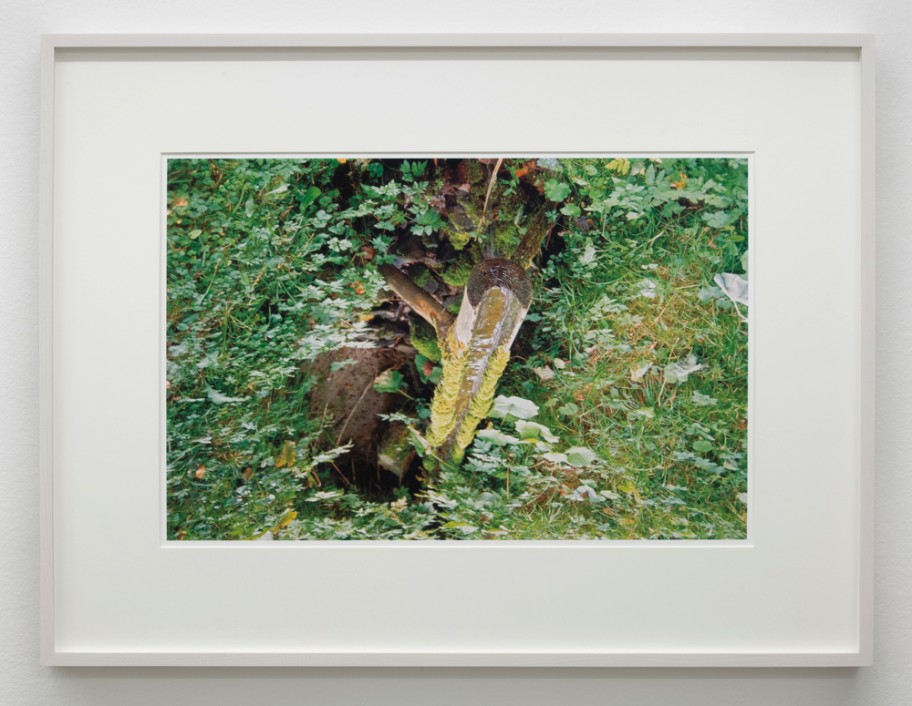 A large-format painting in the style of Socialist Realism from the 1950s shows a scene at a dam in the north of Slovakia. The painting was located in the artist’s family home, just like the objects which Roman Ondák has transferred to this scenery: A part of a wooden door on which a rust-red varnished pipe is mounted (Mailbox, 2013). Ondák’s father had manufactured this mailbox using a sawn-off delineator – a common practice in Slovakia in the 1980s to improvise on everyday objects that served a different purpose. The prototype of such a mailbox appears in a second large-format work in which a white pipe sits on a small round table top that is inserted in a detailed map of Central Europe like a greatly enlarged cutout (Mailbox, 2014). Besides referring to the geography and the artist’s origin, the works are also indicative of Ondák’s private environment – the table on which the mail is placed, the exchange and receipt of messages and information.

In the eponymous work Erased Wing Mirror (2013) Ondák again combines two ready-mades; a found relief map of Slovakia and an object made by his father in the 1990s. Mysterious at a first glance, the object turns out to be a wing mirror-shaped template used for repairing broken car wing mirrors. In this work Ondák addresses the idea of erasement; this blind mirror gives no reflection, it is the mere fiction of a mirror: “If you look back, there is never a full picture.” (Ondák).
The installation Third Way (2013) is also about a change of perspective. An old wooden ladder leans against a wall in front of which, or entangled with which, a miniaturised, delicately made stepladder stands on the floor. In their absurdity, the different proportions become a metaphor for a change of perspective.
A sheet chimney, which suspends from the ceiling of the gallery’s second exhibition space, acts as a set piece that is unhinged from its original use and fully transferred to this new site (Nest, 2012). The positioning in the exhibition space enables an unusual insight; in the interior of the functional structural element there is a deserted bird’s nest.

A find in the building in which the artist’s studio in Bratislava is located also forms the source material for Suspended Window (2013) shown in the gallery’s basement. Parts of a window frame cut into pieces are connected with cords and suspended from the ceiling. The form of the frame as well as the possible view through the window are deconstructed while, at the same time, the object undergoes a transformation into the sculptural.
Black Hole (2013) captures the form of a white pedestal as used in galleries and museums to present objects and sculptures. Instead of placing something on the pedestal, Roman Ondák attaches something to the upper side of the white cube – a keyhole. The focus shifts to the volume, the emptiness of the pedestal’s interior.

With Sky Gravity (1997) the artist has also selected a work from the late-1990s for this exhibition. The photograph shows a found, almost poetic situation in nature. Everything seems right, but the image is upside down: “In the simplicity of reverse, everything is said.“ (Ondák)

Roman Ondák was born in 1966 in Žilina. He lives and works in Bratislava (SK).