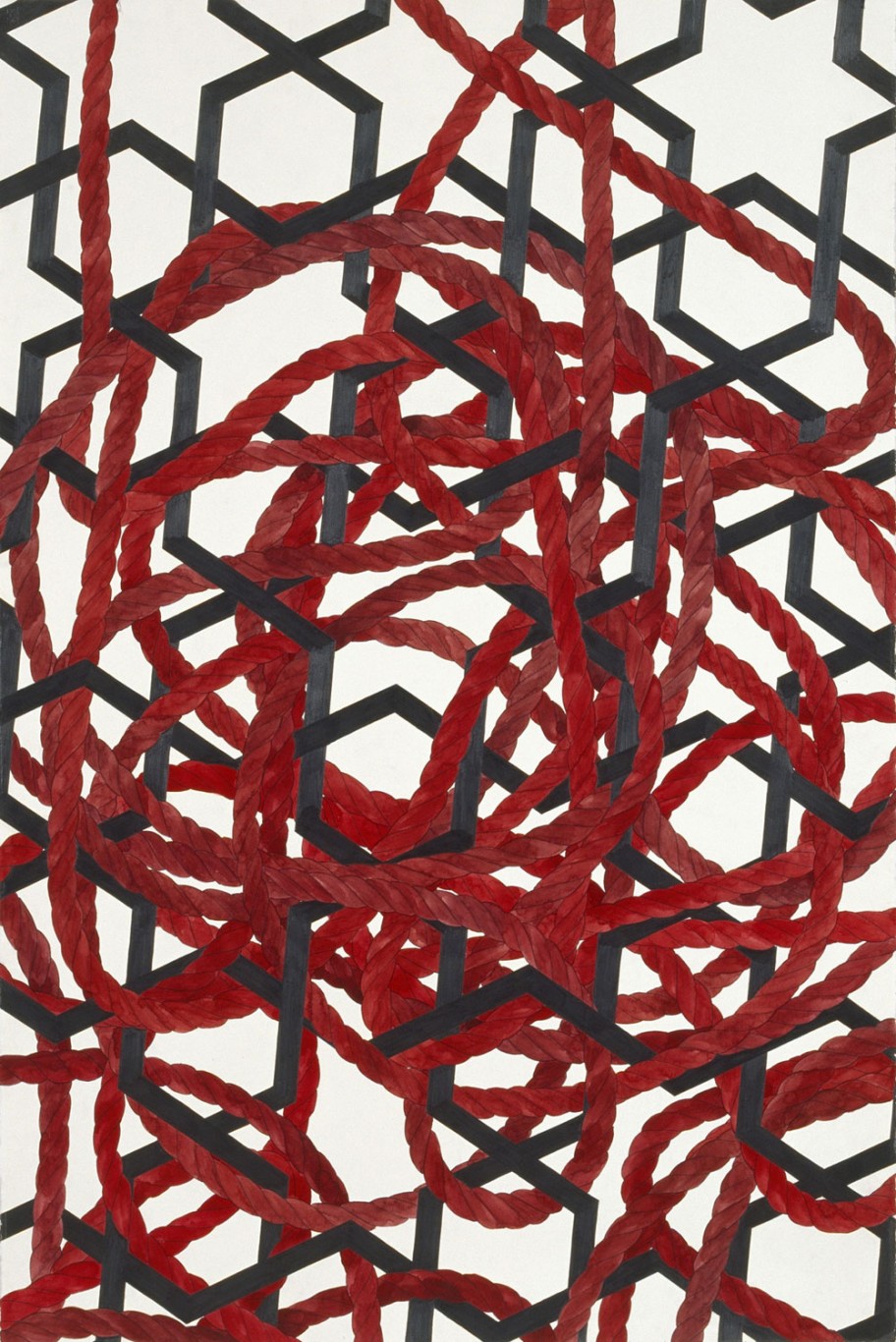 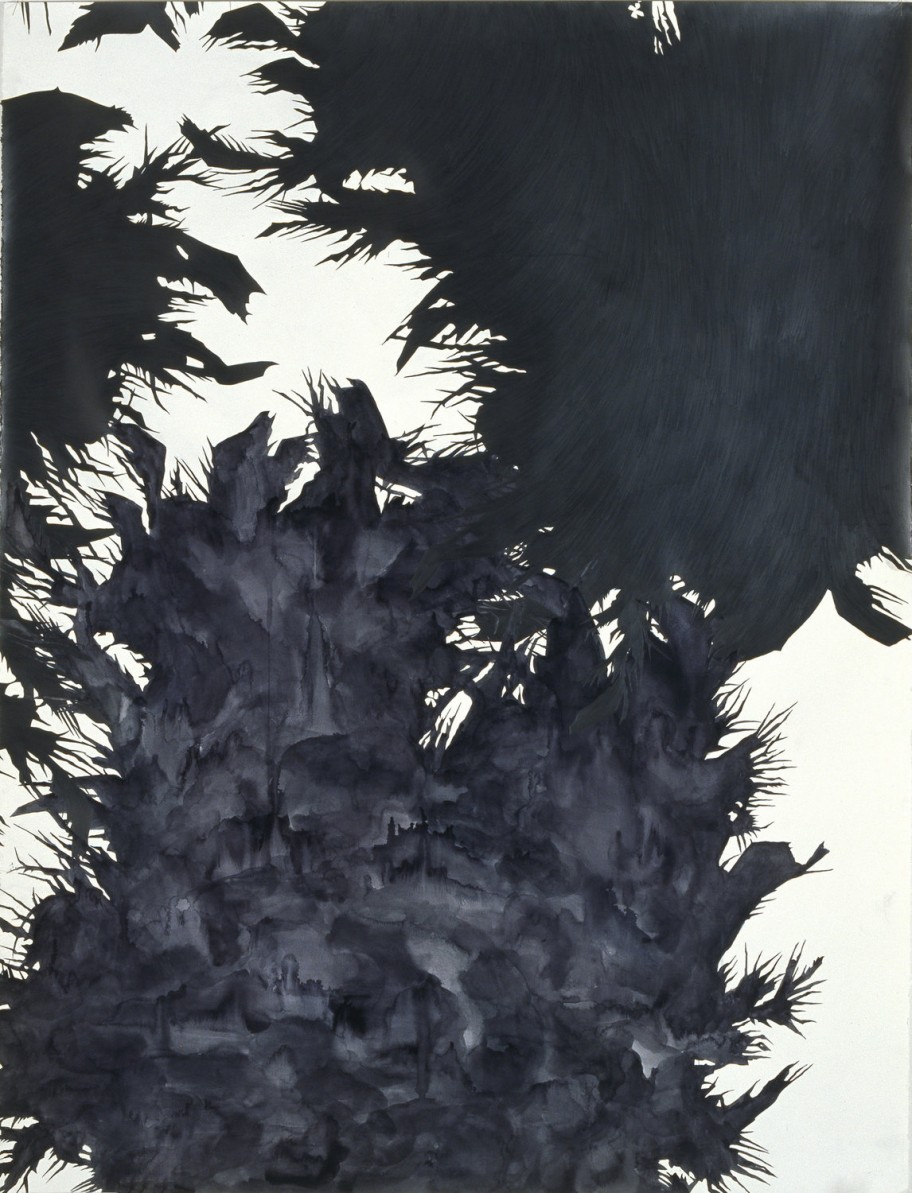 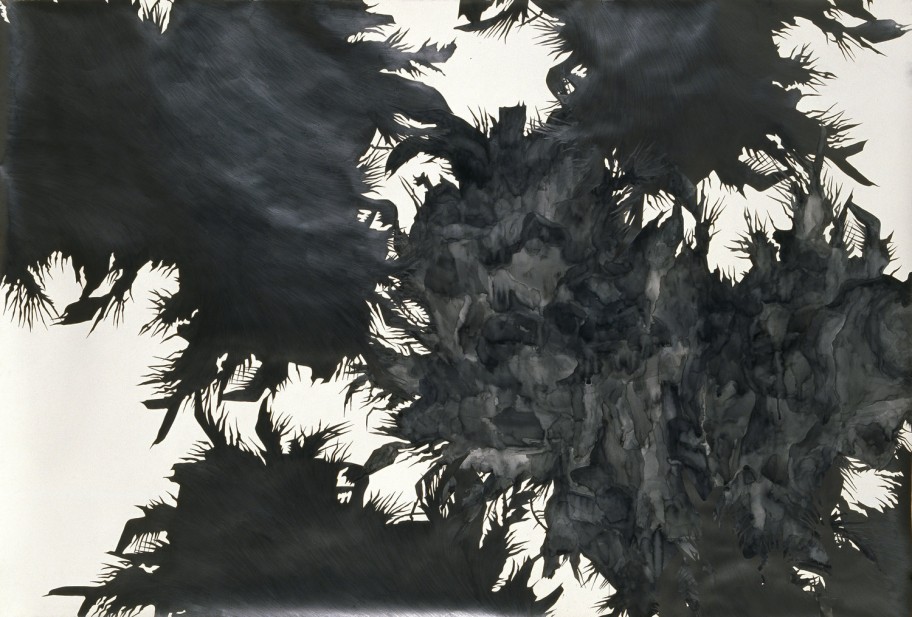 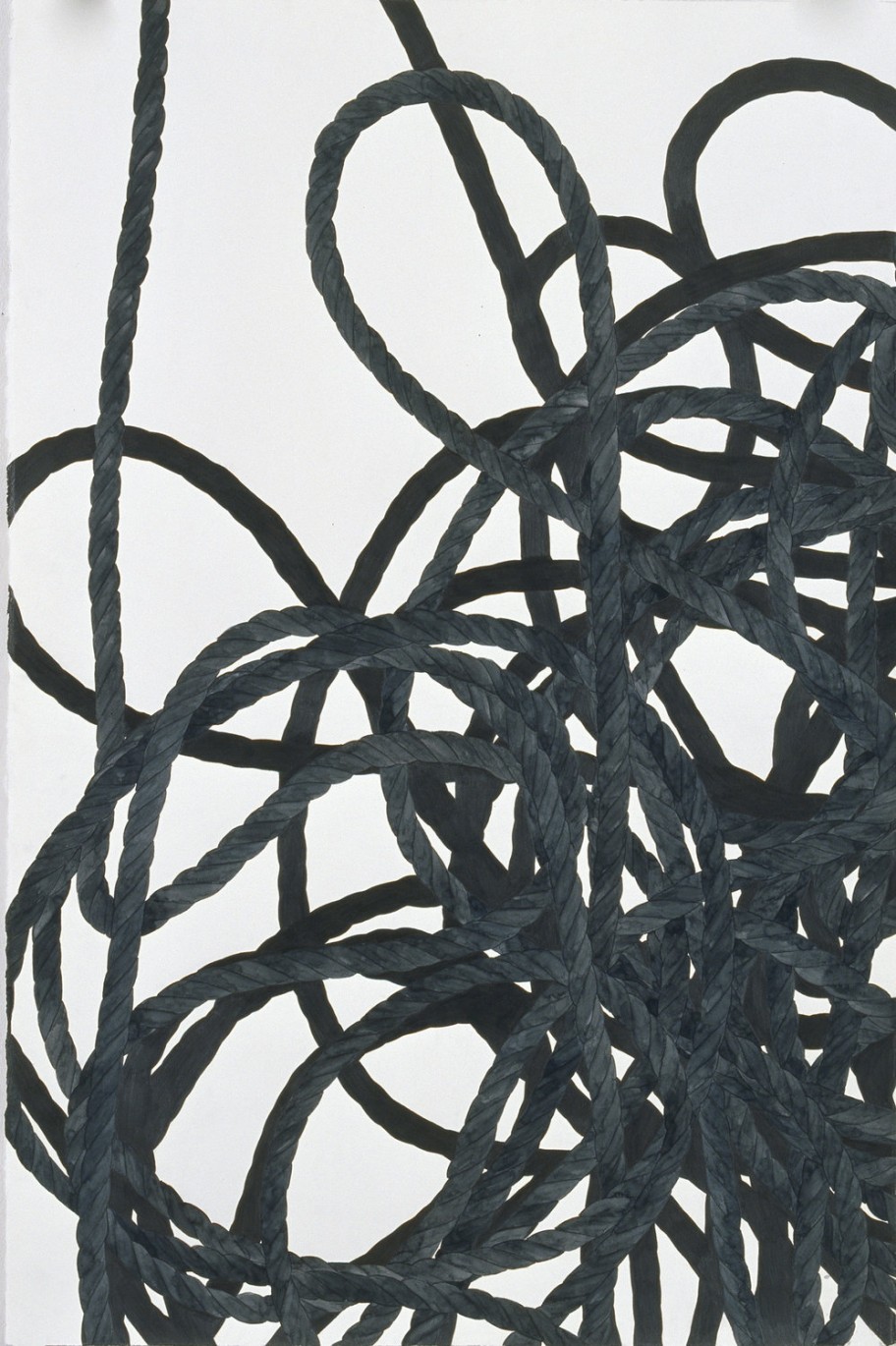 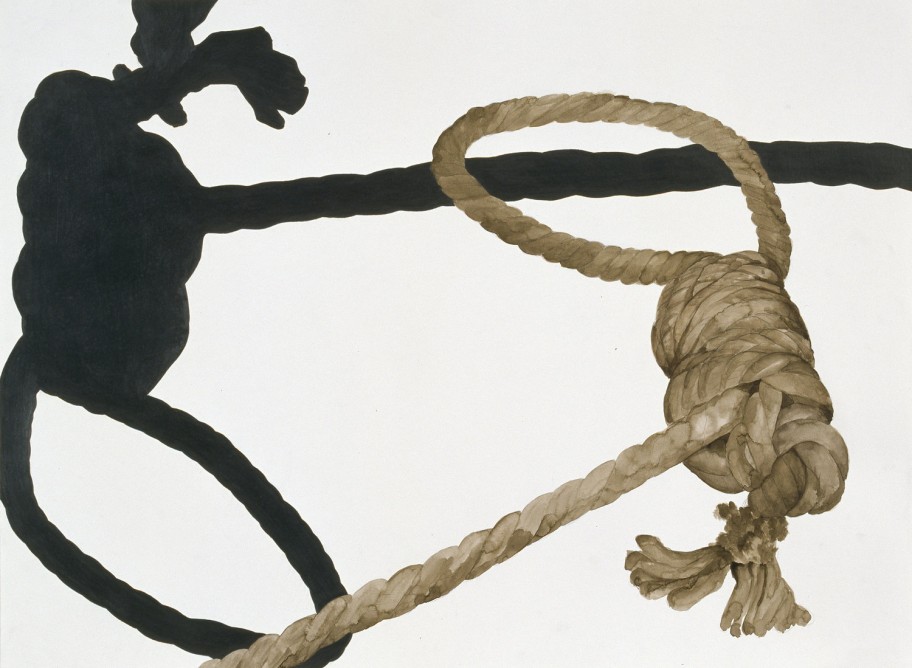 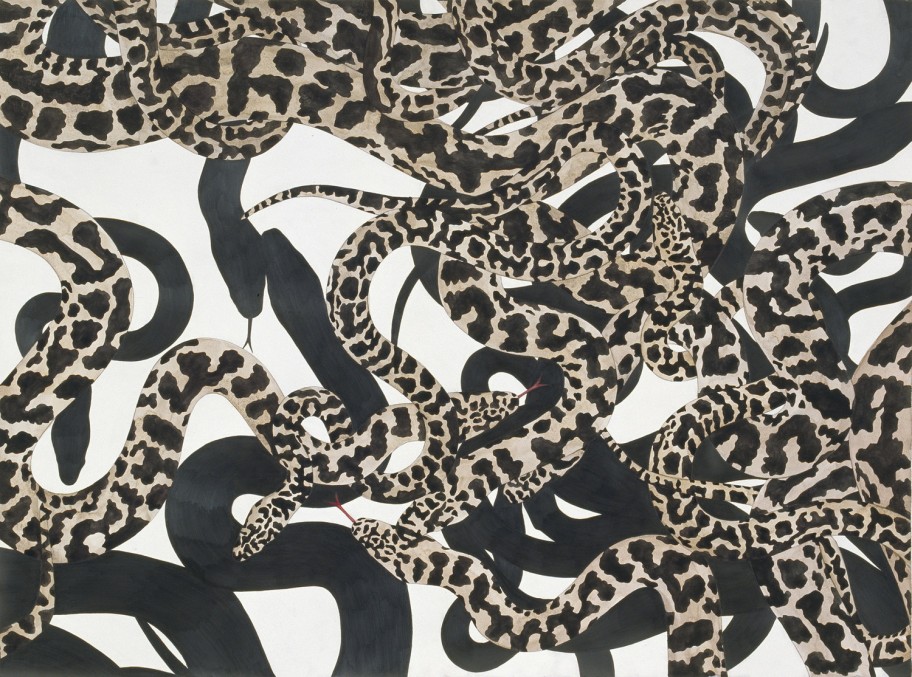 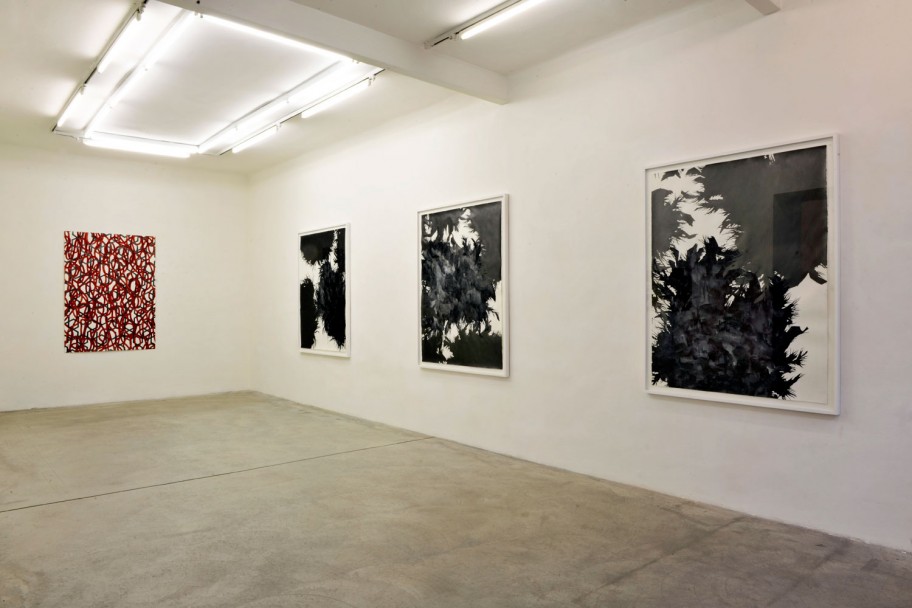 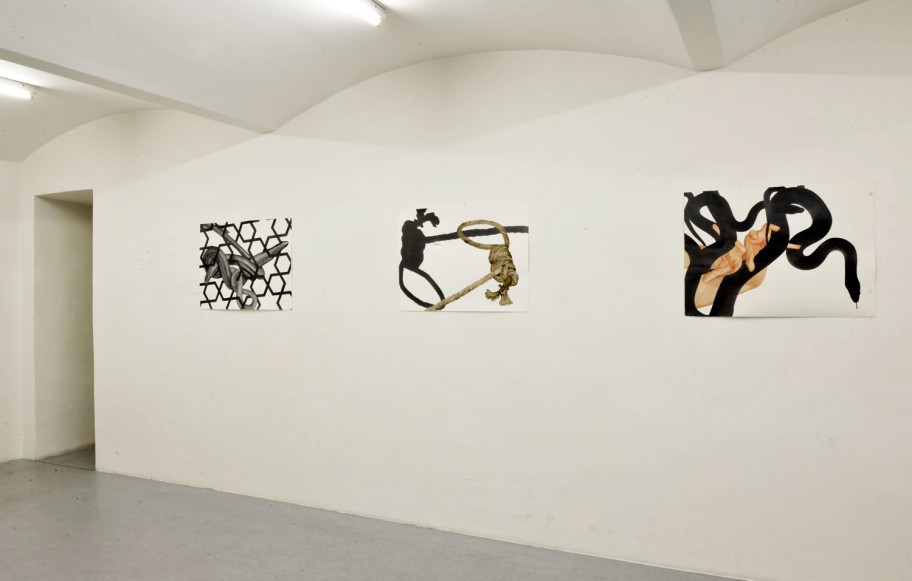 In these new works – watercolours, ink and pencil on paper – she further develops and refines her exploration of ornamental structure to the point that ornamentation has completely vanished. While in the past Czernin set up a relationship between a feminine figure and its ornamental setting, now there is interaction between different objects, objects and shadows, or different structures.

Red ropes are wrapped every which way around a geometric latticework, and it appears to be practically impossible to trace their paths. In Gegittertes two structures are enmeshed: a chaotic one of knotted rope, executed sculpturally in red watercolours, and a geometric, ordered, ornamental structure, similar to those Czernin employed in her last group of work. The weaving creates an “in front” and a “behind”, making the work appear to be in high relief.
Ornament and chaos, repose and momentum, three-dimensionality and surface. Ambivalence is one of the main themes in the artist’s new works – it is more pronounced here than in her previous work. This also applies to her treatment of realism and abstraction: A series of large-format works depicts black formations which appear to float freely, yet are caught up in one another. Some are watercolours, which, due to their painterly quality, have a strong presence and sense of depth. The others are black, tightly sealed surfaces, appearing to be metallic and shadow-like. These structures are not realistic, and yet they bring natural forms to mind.

The object and its shadow also turn up in a smaller format: “A shadow can be a flat mirror image or the duplication of an object. It can become independent of the object, interact with it, or turn against it.” (Adriana Czernin) A knotted rope’s shadow appears to lead a life of its own (Schlingung): It is no longer merely a reproduction, but seems instead to be challenging the object to a duel. The spaces depicted appear to be warped. The shadows of the two snakes turn up again, this time without their fleshed out counterparts. These shadows wind like paths, while two hands with expressively gesturing fingers enter the image from the left side.
Menaces and aesthetics come face to face in Schlingsterne: Two snakes are intertwined, in an almost ornamental fashion, with each other as well as with the latticework.