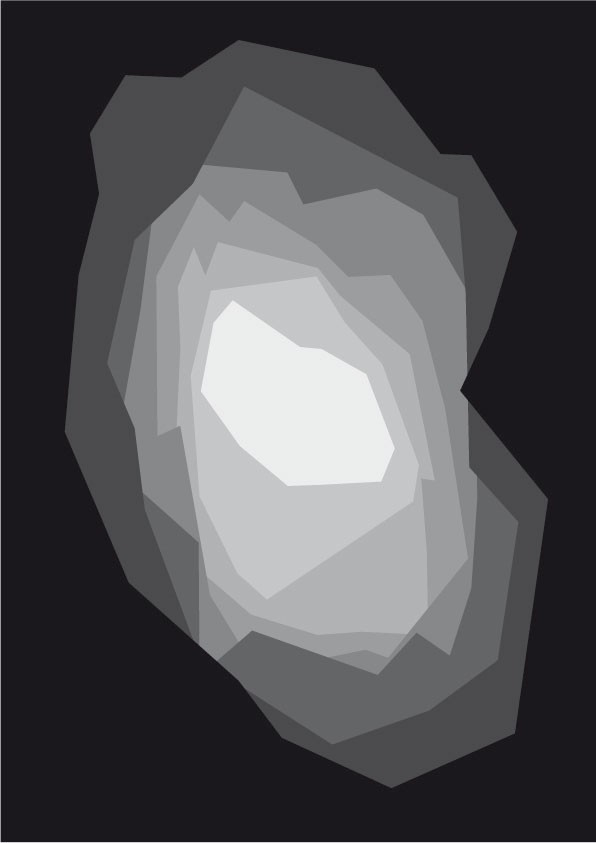 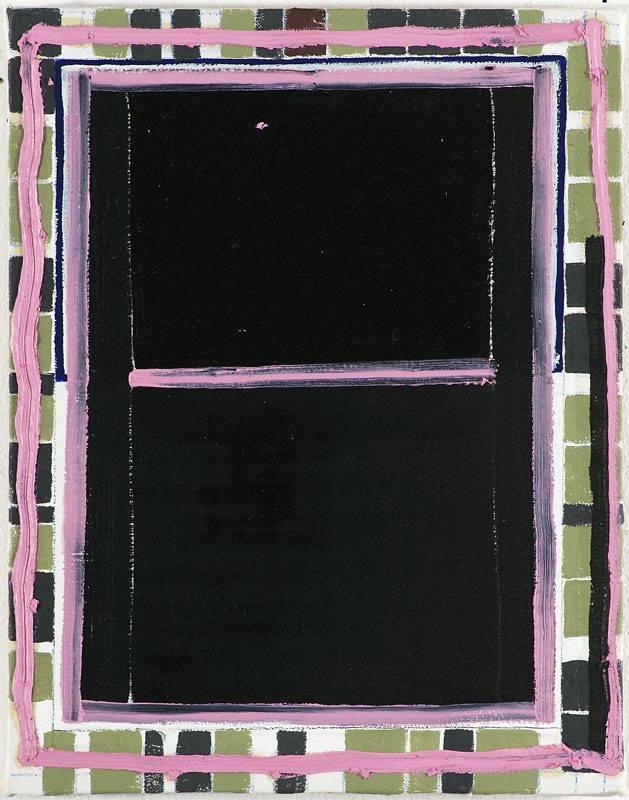 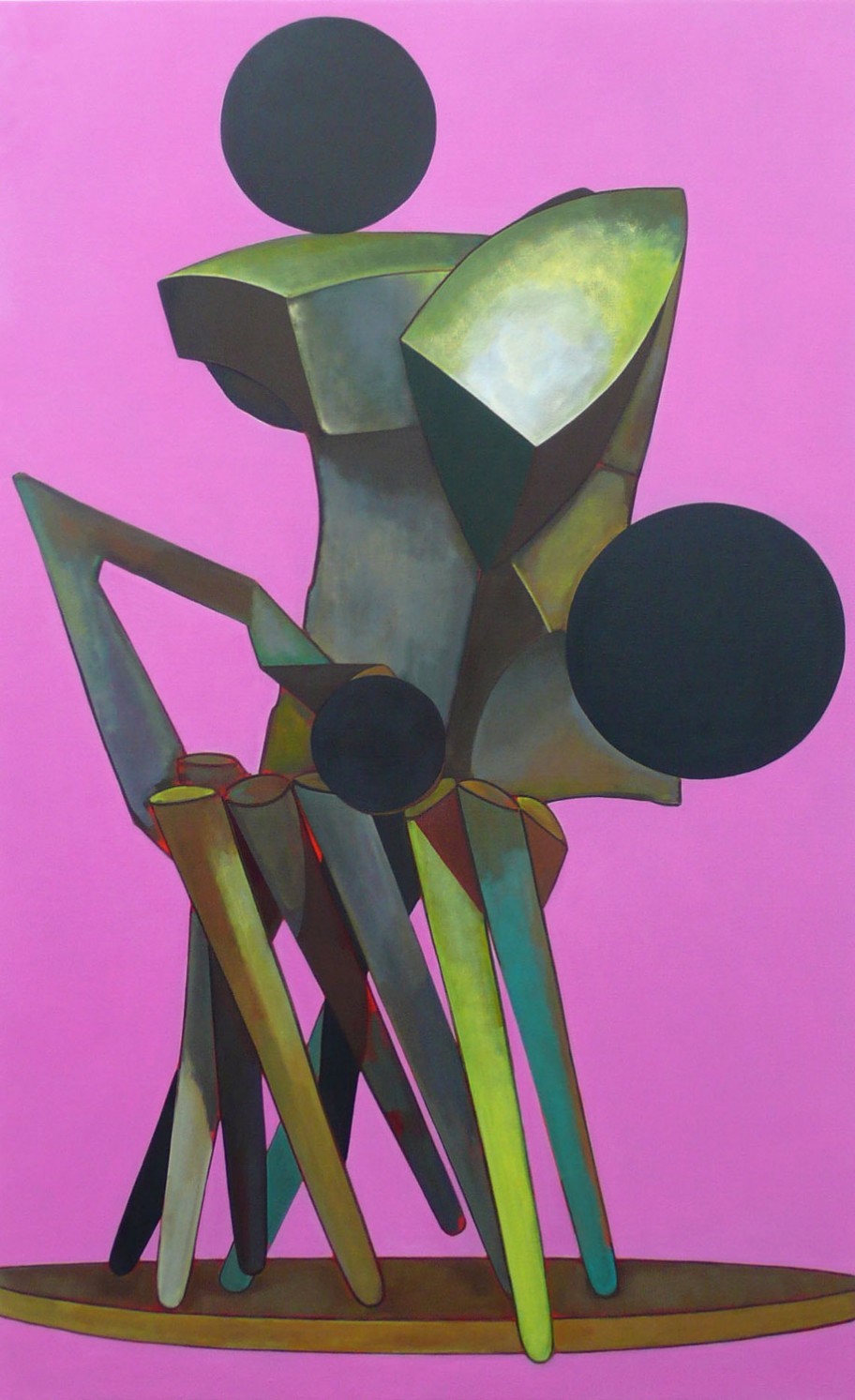 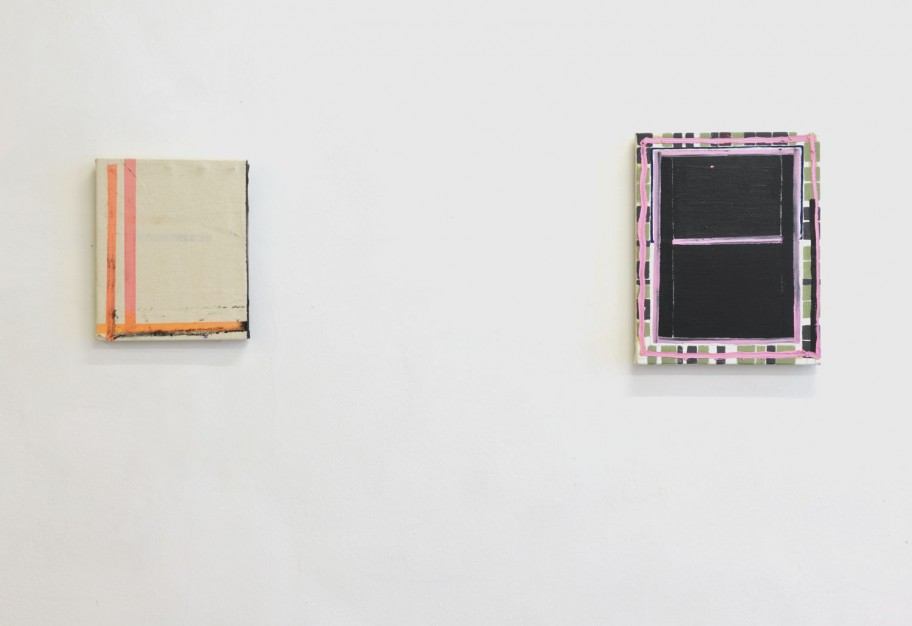 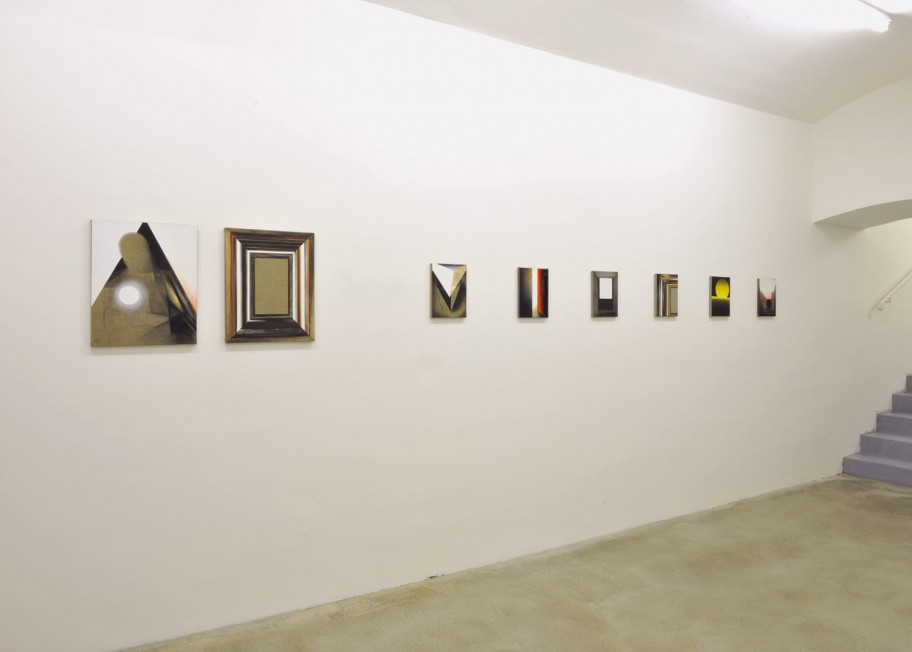 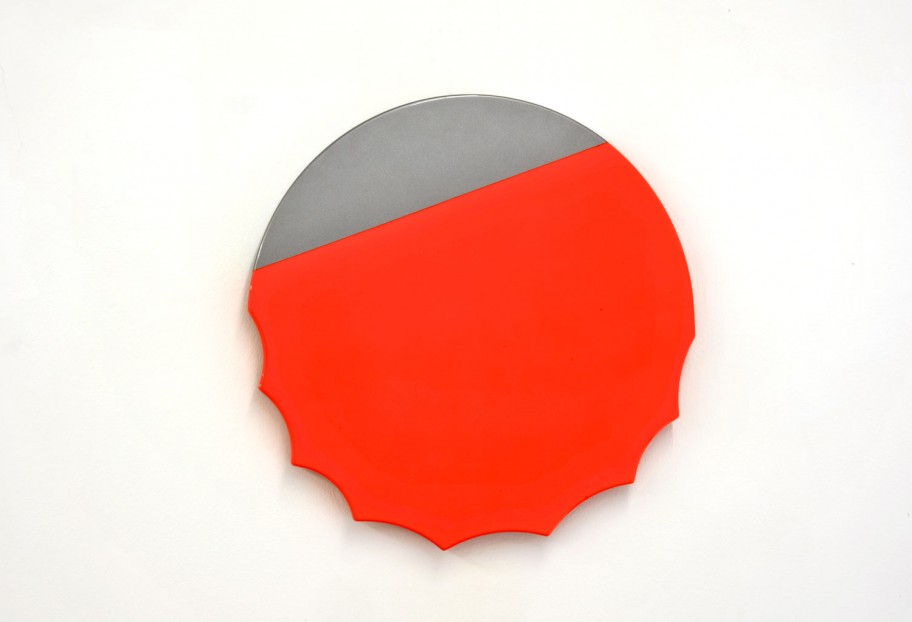 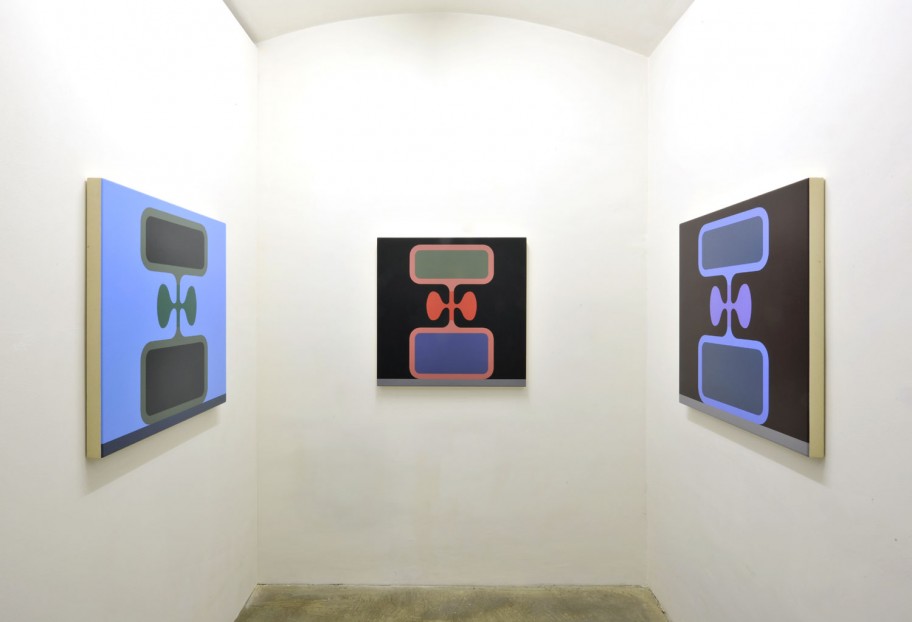 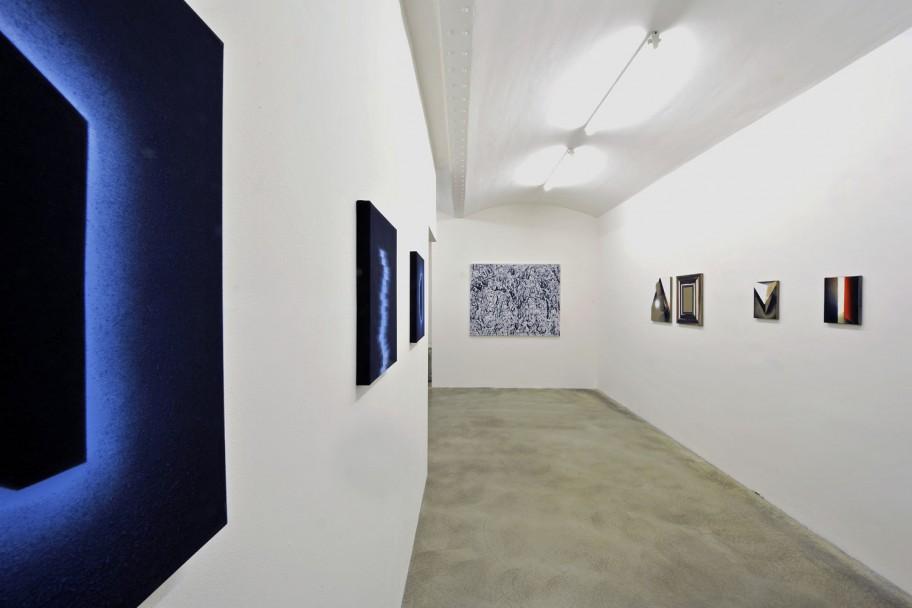 Dark Side of the Moon

From Januray 27 to March 7, 2009, Galerie Martin Janda is showing the group exhibition Dark Side of the Moon, with works by Benjamin Butler, Matt Connors, Svenja Deininger, Milena Dragicevic, Sébastien de Ganay, Michael Hakimi and Christian Hutzinger.
The show’s point of departure is a critical query of how abstraction is generated. As opposed to traditional concepts of abstraction which take artistic methods or approaches into consideration, abstract painting is developed from a variety of realms of experience, such as science, the media, and everyday life or objects, yet without completely abandoning realistic form. The title of the exhibition – Dark Side of the Moon – refers to another look at the mysterious side of human existence and the universe.

A number of years ago, Benjamin Butler, born 1975 in Wamego, Kansas, took the tree as a motif to explore in his painting. “At first glance, Butler’s simplistic forms and restricted subject matter might suggest a lack of substance, but a little more time spent with his paintings reveals a deeper complexity. There are nods, for example, to Impressionism, Color Field painting, and psychedelics.” (Amra Brooks, Artforum) As part of Butler’s involvement with formal conventions of modern painting, he deconstructs the motif “tree” or “landscape” in a process of abstraction into forms, lines and patches of color.

A white surface, on top two vertical strips and one horizontal strip in pale luminescent tones – like pieces of tape - and a black track (Im-Print, 2008): with his small-format works Matt Connors, born in 1973 in Chicago, explores and also thematizes an image’s history. Damage, deletion, repainting and revision become comprehensible, mistakes go uncorrected.

“My painting deals with space and the light that emphasizes parts of it, and setting forms of architecture in a different context to allow them to function symbolically in their own right.” In her small-format canvasses Svenja Deininger, born 1974 in Vienna, concentrates on specific aspects, or segments of a space. Photos she takes on location typically serve as point of departure. The relationship to reality is not overt, yet is expressed. “Abstraction is not a translation of reality, but rather the reality of things and spaces is something of a benchmark for abstraction, which should be capable of the ‘equivalent’.” (Deininger)

With her large-format painting Tigukat (2008), Milena Dragicevic depicts a sculptural object, in front of a monochromatic background, which is set on a narrow base and works its way up the canvas. Volumetric and planar elements appear to be collaged, stacked precariously atop one another, their surfaces in high relief. Blackened circles – but they might also be holes – are superimposed on the object. The word Tigukat, like two other titles of the series we are showing by the painter, is borrowed from the language of the Inuit. It means “movable effects”. Milena Dragicevic was born 1965 in Knin and grew up in Canada. She lives and works in London.

Sébastien de Ganay, born 1962 in France, works in a variety of media – painting and sculpture, figural and abstract. His new work deals with everyday forms which, however, become alienated through their perfect surfaces (lacquer on MDF) and seem almost hermetic: this suggests associations with product aesthetics, design objects, but also with banal objects, such as a beer cap or an oversized piece of fretwork – mnemonic objects.

Michael Hakimi thematizes questions related to perception. He works with unpretentious material and with simple means: printouts of computer-generated images, spray paint on cotton, paper objects, wall paint. In Mondphasen (2007) discs are “lined up on a large strip of paper like exposures on an oversized roll of film whose curling ends might have been taken out of a film can”. (Hakimi) Abstract and figural signs are concentrated as a differentiated system of meaning that unites motifs laden with aspects of popular culture, folklore and society as a whole. Hakimi, born 1968 in Eutin, lives and works in Berlin.

The series of square paintings Ohne Titel (2009) by Christian Hutzinger’s - born 1966 in Vienna - may at first glance appear to be a playful study of adornment. Yet this seemingly whimsical work is borne of a rigorous concept, creating variation – with only a few forms – via the color palette and color composition. By grouping the works in a highly concentrated manner in a relatively small space on the gallery’s lower level, the artist both elicits associations with “the decorative” and evokes suspension and rupture.