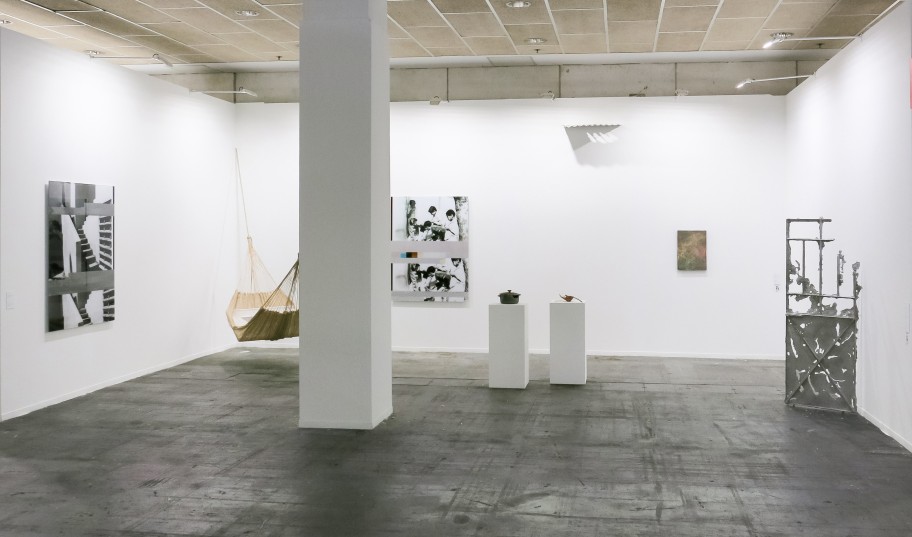 Both artists broadly look at the dynamics of appropriation, the development of the past and image realities. From two different and individual perspectives they explore scrambled and distorted representations of the familiar and the commonplace.

Alessandro Balteo-Yazbeck examines the chaos of his home country Venezuela, probing the problematical historical narratives that bring us to our present. He frequently engages in a research-based practice that confronts cultural, political, and socioeconomic subjects.
The series Modern Entanglements deals with the political dynamics generated by the consumption of natural resources from a critical point of view of sustainable development. For the installation Warao Chinchorro / Hammock, (water-oil), 2004−2014, the artist combines a Venezuelan hammock handmade by an unknown artisan with a framed photograph by Holger Niehaus, showing a glass filled with water and petroleum. “If the 20th century was about oil, most probably the 21st century will be about water, its availability, contamination and the effects of global warming on its cycles.” (Balteo-Yazbeck)
The Corrupted Files present interrupted images which the artist took from two booklets about the Plan Caracas (1974–1976) which documented the governmental initiative intended to consolidate the infrastructure and architectonic design of Venezuelan favelas that organically grew surrounding the modernistic capital city. However only two projects – La Vega and Los Manolos – were finished and documented, and they became examples of the utopian promise that the money accruing from the oil industry would be distributed to improve the lives of the people. Balteo-Yazbeck points to the fracturing of this promise and the use of photography as a tool for demagogic propaganda.

The sculptural compositions of Tania Pérez Córdova are performative works that do not move – contemporary relics, as she calls them. The artist tests the physical limits of materials by transforming them into something they are not. She explores production processes as a new way of seeing and thinking about objects, and as a narrative tool for examining time, identities and places.
Pérez Córdova’s recent body of work explores the transition between original and copy, juxtaposing everyday items like a chain-link fence and a copper saucepan with their hand-cast replicas. She makes a mold of an object, melts it down, and then casts it as a copy made from the molten material of the thing itself. With the production of each replica, more details and marks from the original fade.
“In theory, if I continued the cycle indefinitely, at some point it would result in the things’ disappearance.” The artist doesn’t go so far as to make her objects disappear, but in a material as much as a metaphorical sense, they arguably negotiate loss and regeneration, authenticity and imitation.