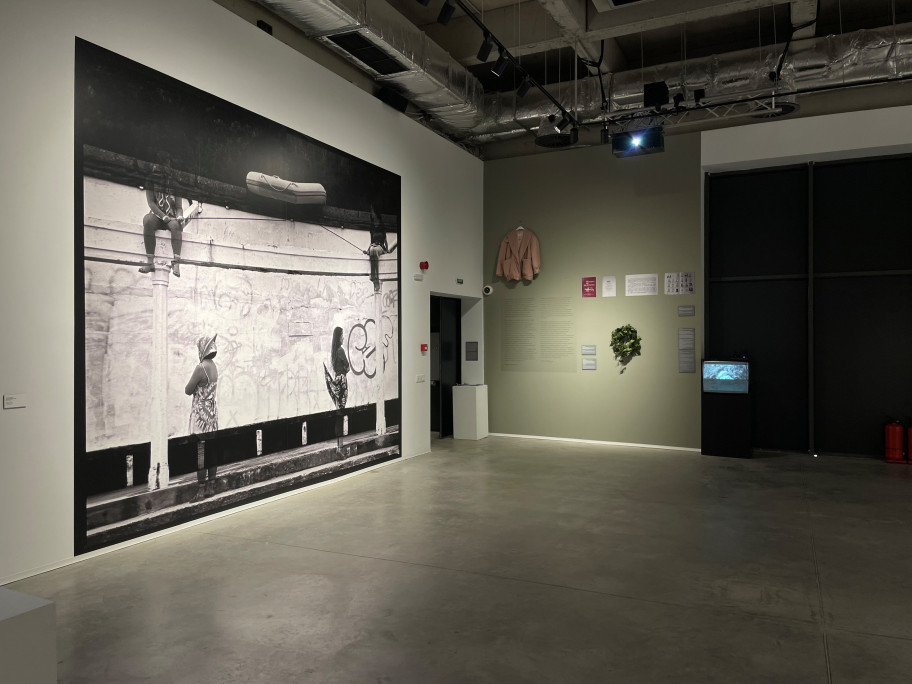 Ausstellungsansicht As Long as You Stand by Me; Foto: Nilbar Güreş

Today, more than ever, we are challenged to support ideas and values, narratives and truths, multiple horizons of the future. Our support comes in more than just words, it comes in deeds. We physically stand for principles and by people as they form territories, lines and multitudes, boundaries and barricades, trenches and processions. Support is presence, a measurable distance, a physical and mental common ground, choice, and care.

The exhibition ‘As Long as You Stand by Me’ unfolds in the spirit of the present day and events. It is the first exhibition to take place in the gallery of RCCA ‘Toplocentrala’ and marks the beginning of the visual arts program at the center. Five artists have been invited to participate with their art works and have been asked by the curator to share what or who they themselves would be willing to stand by as an expression of support and equality. Values that are underlying both for the idea behind ‘Toplocentrala’, and the institution itself, which is a cultural space for the free (in every meaning of the word) contemporary art scene.

Standing by something or someone in their own name, with determination and loyalty, is a challenge approached by the artists in the exhibition across the broad spectrum from individual to universal and from native to world-wide. Their sharing relates to the closeness of human interaction and connection to the family (Nevena Ekimova); the white spots in the collective memory coming alive, the search for a possible alternative history and social order beyond power (Kamen Stoyanov); the explicit artistic gesture and human empathy calling for justice (Nilbar Güreş); the effort to create a universal grammar of peace symbols (Valentina Sciarra); and the resolute action to allow other people enter your space, lining up together with them at the common front of human life and meaning (Antoni Rayzhekov).

On Antoni Rayzhekov’s initiative, nine Ukrainian artists, some of whom are currently volunteers in various activities on the front line in Ukraine, and some are also participants in active battle, have been invited to participate in the exhibition with their video works. The artist initiated his cooperation with them already in 2021, in connection with his work ‘Duet in Self-Determination’ commenting the strong influence and ambition of post-soviet Russia on the countries of Eastern Europe. In the current exhibition, Rayzhekov’s video forms a common ground together with the video works of the Ukrainian artists.