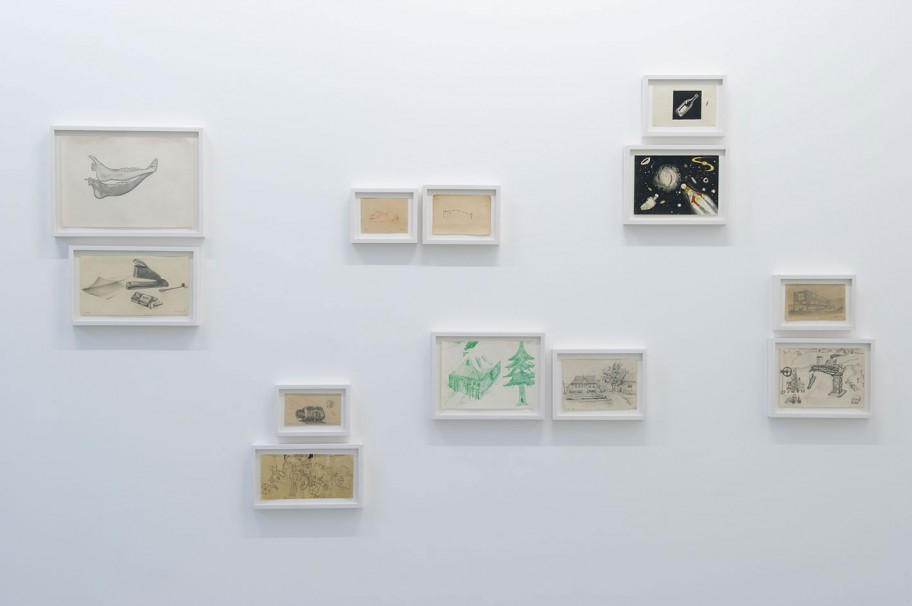 This group show is inspired by a citation used in one of Jiří Kovanda's collages named “The end of utopia”: “The euphoria has ended. Let's start it again.”

This injunction could sound like an acknowledgement, one of some kind of disillusion. The end of utopias. The causes remain unknown, but it announces a breaking point. We are forced to a new beginning. Blank screen at the end of an apocalyptic movie : what we've known is no more, let's start over again.

But all the pieces shown in the exhibition share this ambiguity : announcing a possible failure or the end of an era, they nevertheless create at the same time a new field of possibilities. Between anachronism, retro-futurism and fictionalized past, they fall within an odd and non-lineal temporality : per se, they contain at once the idea of the past, of the present and of the future. The artists shown in the exhibition are indeed not that interested in the end of a story but instead in the fantasy of rewriting, of resumption, of projection. Against a backdrop of collective utopias, this will to initiate a form of renewal, to replay the loop of history, firstly comes from an intimate desire. Every narrative, in the service of the playful, poetic or political will of creation, can be allowed to give up the truthful to become falsifying. Once the limits are set, everything is made possible.

The twelve drawings of the installation ‘Teenagers’ (2002) have been realized by two teenagers: Július Koller and Roman Ondák. Though made several years apart, their drawings are presented together here, grouped in pairs that highlight likenesses and differences rather than questions of influence or youthful talent. Belonging to two different generations (Koller has lived through state communist ideology, Ondák the entry of Slovakia into the E.U..), they meet here through this still undefined state which is adolescence : close friends when they conceived this piece together, they were only children when they realized these drawings. ‘Teenagers’ introduces some recurrences in Roman Ondák's work : the connections between reality and its staging ; the relations between the unique and unpredictable moment and its repetition ; the use of memory and its representation, which offers a free space for the imagination and the unconscious . Like a reversed premonition, the elder Július Koller’s bottle on a black square parallels Ondák’s rocket zooming through space. We remember then the constant interest Július Koller (who has also questioned notions of otherness, inventing fictitious interlocutors) has had for the mysteries of the cosmos, and his ‘futurological’ vision - neither present nor future, a temporality with its discontinuities, anachronisms and parallel times.